I just updated the Android Studio to 3.5 Beta 1 and I'm getting

message while the build is running. Also, the build is taking more time to complete. Does anyone have any idea regarding this?

I was able to solve this for my React Native project by configuring the following:

This can be fixed by increasing the configured max heap size for the project.

Add the below lines into the gradle.properties file. Below memory size (1) can be configured based on the RAM availability 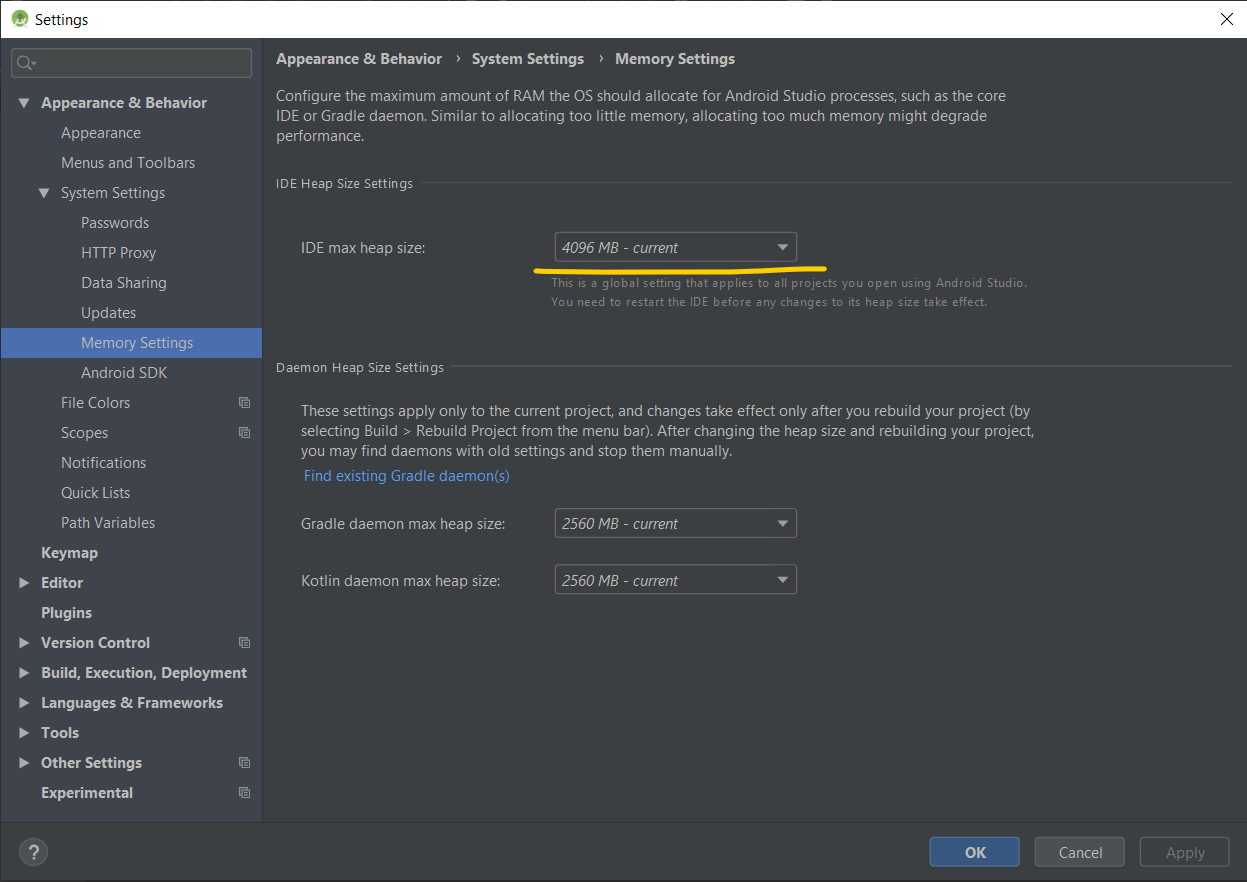 The solution is to increase Android build memory.

As you add more modules to your app, there is an incredible demand placed on the Android build system, and the default memory settings will not work. To avoid OutOfMemoryErrors during Android builds, you should uncomment the alternate gradle memory setting present in /android/gradle.properties:

You can find gradle.properties inside android folder.

What we are doing this and why it helps?

Let me clear some basic terminology for understanding the whole thing.

Daemon : - A daemon is a computer program that runs as a background process, rather than being under the direct control of an interactive user.

Android Studio 2.1 enables a new feature: Dex In Process, that can dramatically increase the speed of full clean builds as well as improving Instant Run performance.

To take advantage of Dex In Process, you’ll need to modify your gradle.properties file and increase the amount of memory allocated to the Gradle Daemon VM by 1 Gb, to a minimum of 2 Gb, using the org.gradle.jvmargs property:

Specifies the JVM arguments used for the daemon process. The setting is particularly useful for tweaking memory settings.

The default Gradle Daemon VM memory allocation is 1 gigabyte — which is insufficient to support dexInProcess, so to take advantage you’ll need to set it to at least 2 gigabytes.

If you’ve increased the javaMaxHeapSize in your module-level build.gradle file beyond the default of 1 gigabyte, you’ll need increase the memory assigned to the Gradle Daemon correspondingly.

When there’s enough memory assigned Dex in Process is enabled by default, improving overall build performance and removing the overhead of starting multiple parallel VM instances. The result is a significant improvement in all build times, including Instant Run, incremental, and full builds.

In my case it was some kind of gradle bug probably. We had actually no memory problems, but the message kept on appearing. My solution was: