I'm unable to access the iMac camera from a command line OpenCV program. (I'm compiling and running the program under CodeRunner, not Xcode.) I've read that Mojave requires NSCameraUsageDescription in Info.plist and I think I'm embedding it correctly in the binary. I added -sectcreate __TEXT __info_plist Info.plist (which I learned about here) to the compile flags and when I run otool -X -s __TEXT __info_plist videotest | xxd -r (from the same blog post) it outputs:

(I added NSMicrophoneUsageDescription in case it was trying to open the microphone along with the camera.)

This is the output when I run the program:

It implies it's requesting access, but I never get a dialog and no apps are listed under System Preferences > Security & Privacy > Camera.

This is the compiler invocation:

What piece of the puzzle am I missing?

(I know this is similar to Cannot access camera with opencv on Mac Mojave but that question never went beyond a malformed plist file.)

In response to the suggestion to make sure ffmpeg see the device:

It not an ultimate solution but I got it resolved by installing any terminal application that request access to your Camera. Then your openCv c++ program will gain the access to the FaceTime HD Camera afterwards.

for example, you can install ImageSnap by:

Then give camera permission through the pop out that will appear.

As far as CodeRunner, I'm not sure how to get CodeRunner to run Python programs under a virtual environment so I haven't been able to run a Python OpenCV program to get it to ask for camera access. So at the moment I can't use CodeRunner to run a c++ program that accesses the camera.

A couple of comments here...

The error I'm seeing when trying to run OpenCV from my MacOS development environment Is:

I know those words originate from the OpenCV library here. My initial thought was that this was an OpenCV issue. With a bit more testing I think it's something else. As others have noted, MacOS security / permissions issue. But here's the rub.

If I go to Mac Apple Icon (Upper Left Corner) --> Systems Preferences --> Security and Privacy I can glean a lot of info. 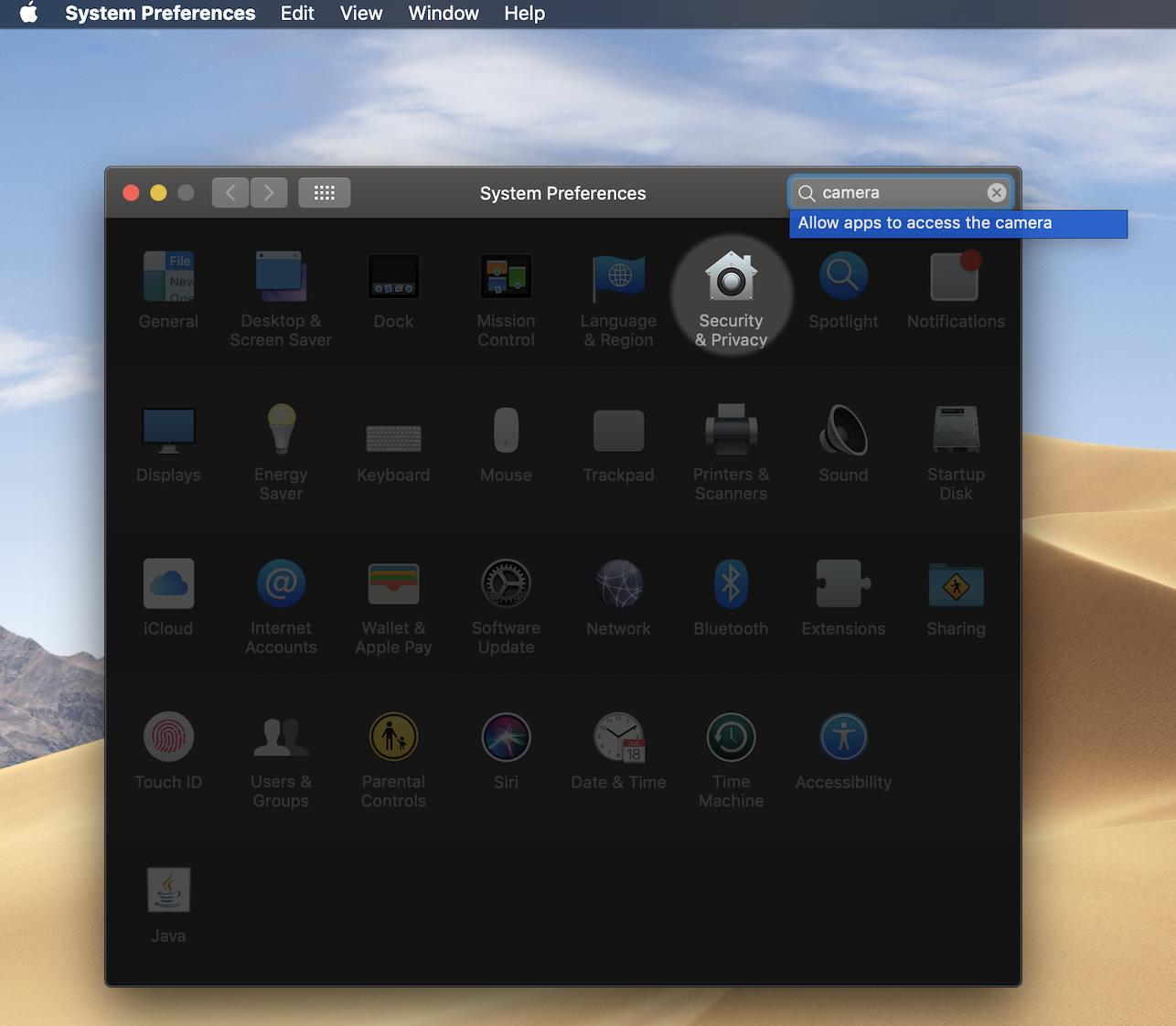 Check on the Camera Icon. 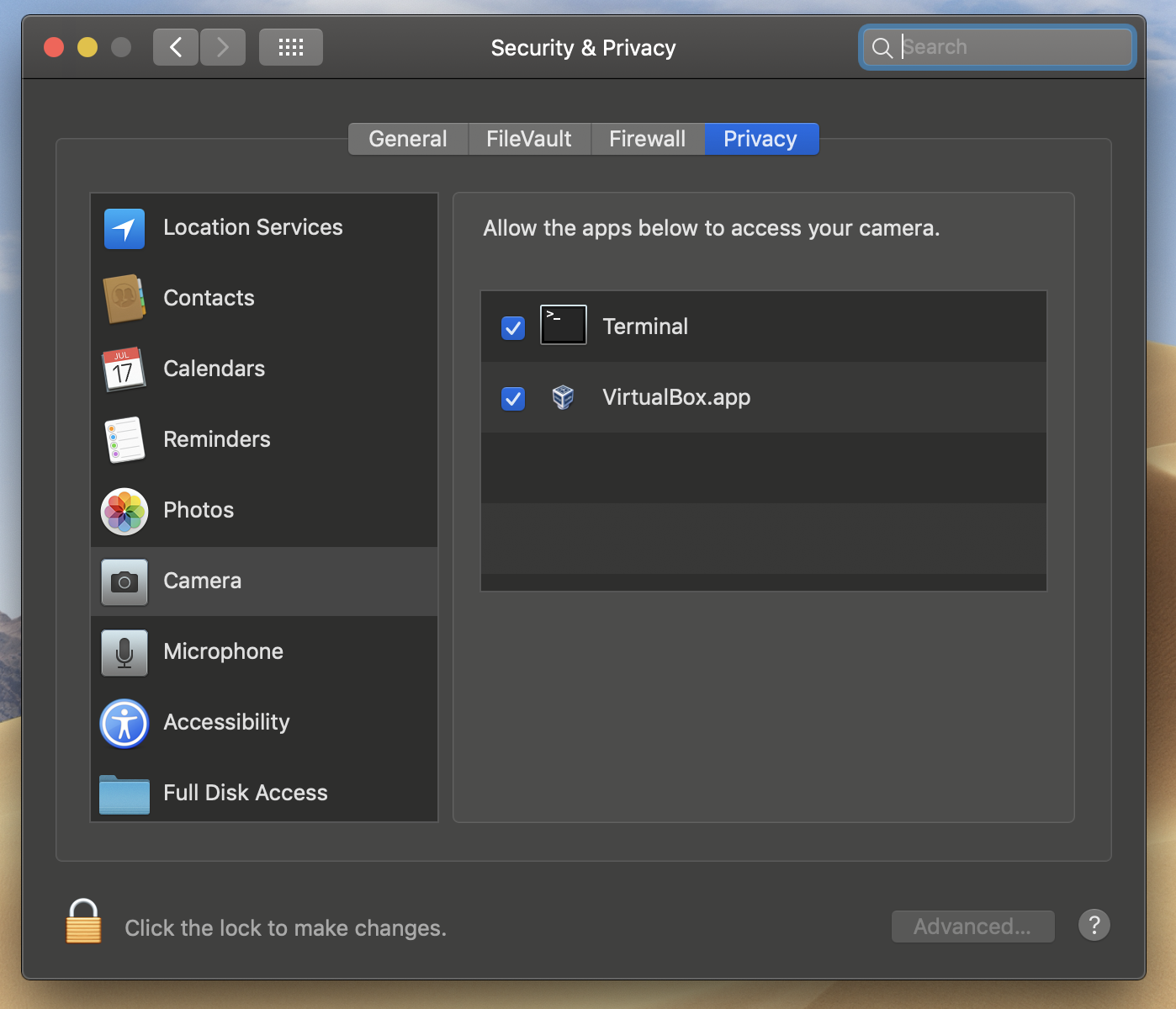 In my case this shows two applications which require additional permissions to get access to the camera, Terminal and Virtualbox (not sure what happens to browser, Facetime?) I do note, Xcode didn't make this list.

When I click over to Microphone, I see different apps listed, INCLUDING Xcode. 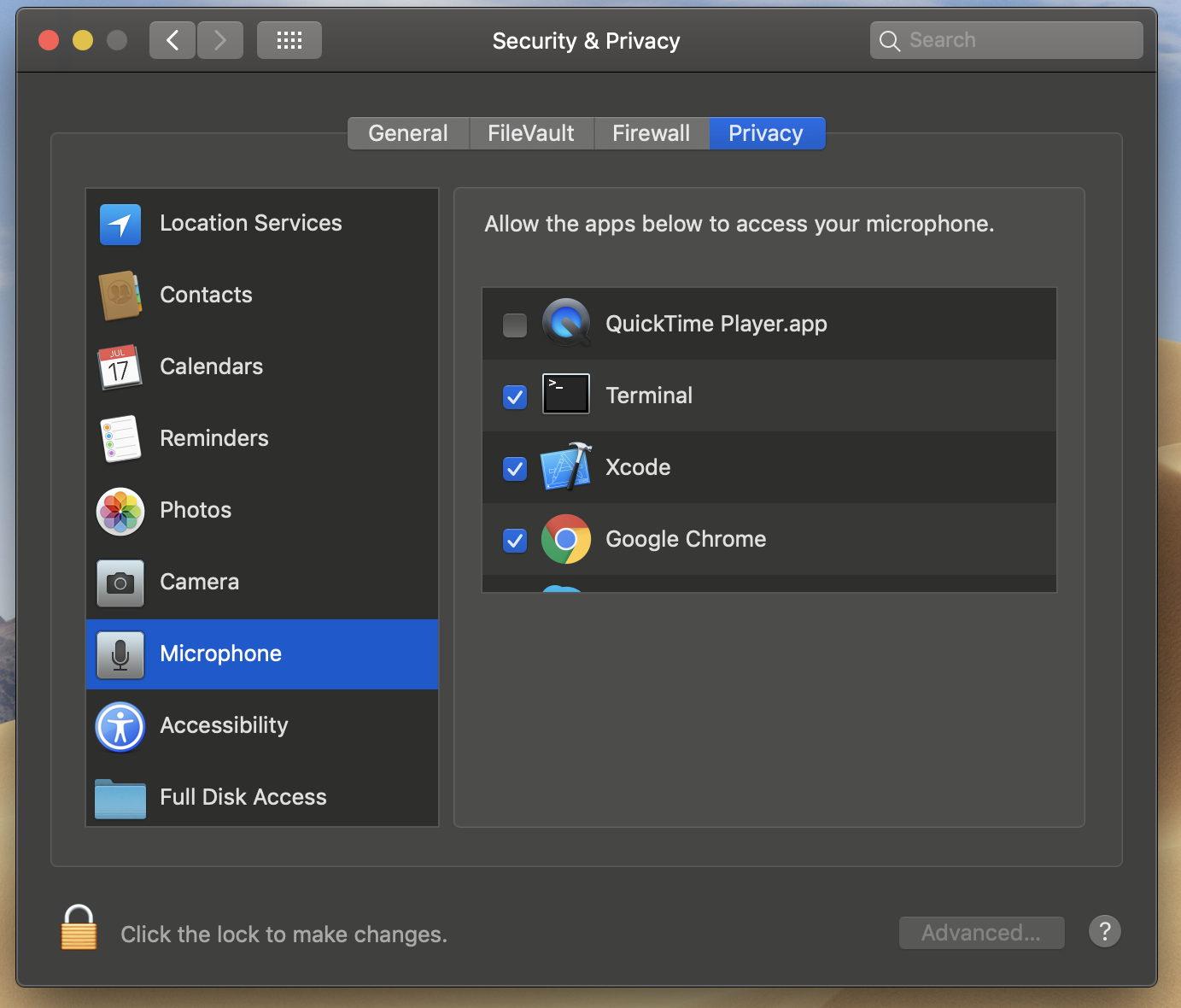 How does that even work? I did do a whole lot of testing, including researching modifying the Info.plist for the Xcode application package (Finder --> Applications Folder --> Xcode --> Rt click, Show Package Contents. Copy Info.plist save it elsewhere, modify it via Xcode, resubmit.) Note: Don't try this without keeping a copy of the original Info.plist. Total fail. Adding the NSCameraUsageDescription key/value was a total bust. Xcode won't open at all. Reminder DON'T lose the original Info.plist.

This whole thing is baffling. Why does Apple allow us to access the camera via terminal but not in Xcode? What's the logic there?

I sure would like to be able to step thru code to understand frame by frame possible design issues. This just isn't fun.

So a couple of things to understand.

I start my OpenCV project with:

It's a hack work around, but better than nothing. (Sure wish Apple included the camera in iOS emulator, that would be another way to solve this, sigh.) Obviously a lot depends on where you are going with your project. Ultimately I need mine to run on an iPad; Proveout on MacOS, then wrap code in Swift, etc...

PS. The security preferences above doesn't show Chrome with Camera access. Seems odd. I just tested the camera at this site... in Chrome, and it asks for permission and works exactly as expected. Its not clear on what's going on here.

PS2. Am I the only person to file a bug report on this issue? Link included for your convenience. Thanks.

OpenCV project is on C++

Add this class to your project:

.mm file. Note it's not .cpp, it's .mm because we want to operate with AVFoundation

And before accessing VideoCapture, call this method like that:

You might wonder - why am I creating C++ class while using Objective-C++ extension (.mm)?

Method dealWithCamera() is very far from perfect but it suits exactly my needs. Feel free to extend it, optimize, add a callback, etc.

I was finally able to resolve this by following a chain of recommendations across Stackoverflow and GitHub. It was a painful bug that burnt my day trying to get my code to work again even though it was working fine pre MacOS Mojave.

Put the Info.plist file with the NSCameraUsageDescription field as suggested in the Products/Build directory of your Target (Right click Product in left pane in Xcode project and click "Show in Finder").

Instantiating the cv::VideoCapture(0) object to access the camera video stream throws the follwoing error even though the code was running fine in MacOS version before Mojave

MacOS Mojave has tightened the privacy protection, which now requires applications to explicitly prompt and seek permission from the before accessing the camera as explained here.

Below suggestions as given in various Stackoverflow posts did not successfully force the built binary to prompt for permission to access the camera: - Adding the Info.plist to your Project directory - Setting the path to Info.plist under Build Settings > Packaging > Info.plist File or - Choosing it in General > Identity > Choose Info.plist File... of your Target

As indicated in the opencv closed GitHub issue, some change was made in the libopencv around April '19 which could've also possibly facilitated the usage of available Info.plist in the build directory to prompt the user for permission to access camera. So I also upgraded my opencv to latest stable 4.1.0 release using brew upgrade.

I found a work around for this:

Next, I ran a 3rd party software to access camera from terminal. By running the following:

I was asked if I wanted to allow terminal to access my camera. I clicked "Yes". And now my C++ program can now access the camera from terminal.

Note: The pictures shown ZipZit were very similar except I did not have terminal listed under camera.

But after running 3rd party program,. it was then added to list.

We're getting this exact issue running on opencv 4.1.1-pre. We solved the issue by rolling back to 4.0.1.

There is a possibility that your OpenCV package is corrupted. None of the above solutions helped me and I put my solution here. Maybe it can be helpful for you too.

I was having a similar issue when running an OpenCV code. I was able to fix it very reliably by going into Setting->Security & Privacy ->Privacy and in here adding Xcode (you could add your own program here) to the developer tools permission. image showing this tab Adding the program here bypasses the tightened security restrictions from most macOS versions after Mojave. (I personally did this in macOS Monterey). Hope this helps!

Not the answer you're looking for? Browse other questions tagged macos opencv macos-mojave or ask your own question.