How to plot a gene graph for a DNA sequence say ATGCCGCTGCGC?

I need to generate a random walk based on the DNA sequence of a virus, given its base pair sequence of 2k base pairs. The sequence looks like "ATGCGTCGTAACGT". The path should turn right for an A, left for a T, go upwards for a G and downwards for a C. How can I use either Matlab, Mathematica or SPSS for this purpose?

I did not previously know of Mark McClure's blog about Chaos Game representation of gene sequences, but it reminded me of an article by Jose Manuel Gutiérrez (The Mathematica Journal Vol 9 Issue 2), which also gives a chaos game algorithm for an IFS using (the four bases of) DNA sequences. A detailed description may be found here (the original article).

The method may be used to produce plots such as the following. Just for the hell of it, I've included (in the RHS panels) the plots generated with the corresponding complementary DNA strand (cDNA).

These plots were generated from GenBank Identifier gi|342520. The sequence contains 16295 bases.

(One of the examples used by Jose Manuel Gutiérrez. If anyone is interested, plots for the human equivalent may be generated from gi|1262342).

There are pretty interesting plots! The (sometimes) fractal nature of such plots is known, but the symmetry obvious in the LHS vs RHS (cDNA) versions was very surprising (at least to me).

The nice thing is that such plots for any DNA sequence may be very easily generated by directly importing the sequence (from, say, Genbank), and then using the power of Mma.
All you need it the accession number! ('Unknown' nucleotides such as "R" may need to be zapped) (I am using Mma v7).

This speeds things up very considerably. See Mark's comment below.

Thanks to Sjoerd C. de Vries and telefunkenvf14 for help in directly importing sequences from the NCBI site.

Splitting things up a bit, for the sake of clarity.

The method given for importing sequences in the original Mathematica J. article is dated.

The second set of plots was generated in a similar manner from gi|455025. Note that the sequence is long!

The first line of the fasta file:

The corresponding cDNA plot is again shown in blue on RHS

Finally, Mark's method also gives very beautiful plots (for example with gi|328530803), and may be downloaded as a notebook.

Not that I really understand the "graph" you want, but here is one literal interpretation.

None of the following code in necessarily in a final form. I want to know if this is right before I try to refine anything.

Now that I know what you want, here is a packaged version of the first function:

It sounds like you might be talking about CGR, or the so called Chaos Game Representation of a gene sequence described in the 1990 paper "Chaos game representation of gene structure" by Joel Jefferey. Here's an implementation in Mathematica:

Here's how to apply it to a gene sequence taken from Mathematica's GenomeData command: 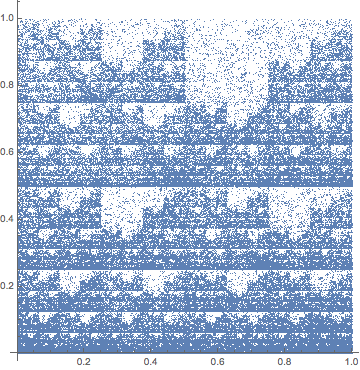 Assuming that the sequence S has been mapped already*) to integer array then the actual computation of movements is straightforward based on rules R:

*) You need to elaborate more on the actual sequence. Is it represented as single string, or perhaps as cell array, or something else?
Edit:
Assuming your sequence is represented as string, then you'll map it to integer sequence S like:

And to plot it:

where linespec is the desired line specification.

This question seems to have been well answered already, but I thought I'd add that what you are describing has been previously published under the banner of DNA walks among a collection of numerical representation methods for DNA sequences, which are discussed in our preprint.

It turns out that DNA walks aren't very useful in practice, yet permit intuitive visualisation. I don't have it to hand, but I'd imagine my colleague would be more than happy to provide the Matlab code used to generate the below figure.

Not the answer you're looking for? Browse other questions tagged matlab wolfram-mathematica bioinformatics dna-sequence or ask your own question.

0
Determining the ratio of matches to non-matches of 2 primary strands?
7
chaos game for DNA sequences
-1
Algorithm to find bijection between arrays
1
Plotting vectors based on a genetic sequence