How to remove a column from an existing table?

How to remove a column from an existing table?

I have a table MEN with Fname and Lname

I need to remove the Lname

Your example is simple and doesn’t require any additional table changes but generally speaking this is not so trivial.

If this column is referenced by other tables then you need to figure out what to do with other tables/columns. One option is to remove foreign keys and keep referenced data in other tables.

Another option is to find all referencing columns and remove them as well if they are not needed any longer.

In such cases the real challenge is finding all foreign keys. You can do this by querying system tables or using third party tools such as ApexSQL Search (free) or Red Gate Dependency tracker (premium but more features). There a whole thread on foreign keys here

This is the correct answer:

In SQL Server 2016 you can use new DIE statements.

The above query is re-runnable it drops the column only if it exists in the table else it will not throw error.

The question is, can you only delete a column from an unexisting table ;-)

The simple answer to this is to use this:

More than one column can be specified like this:

From SQL Server 2016 it is also possible to only drop the column only if it exists. This stops you getting an error when the column doesn't exist which is something you probably don't care about.

There are some prerequisites to dropping columns. The columns dropped can't be:

If any of the above are true you need to drop those associations first.

Also, it should be noted, that dropping a column does not reclaim the space from the hard disk until the table's clustered index is rebuilt. As such it is often a good idea to follow the above with a table rebuild command like this:

Finally as some have said this can be slow and will probably lock the table for the duration. It is possible to create a new table with the desired structure and then rename like this:

But be warned there is a window for data loss of inserted rows here between the first select and the last rename command.

To add columns in existing table:

To delete columns in existing table:

This can also be done through the SSMS GUI. The nice thing about this method is it warns you if there are any relationships on that column and can also automatically delete those as well. 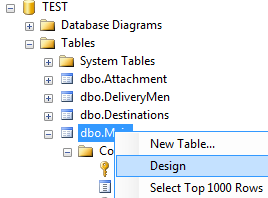 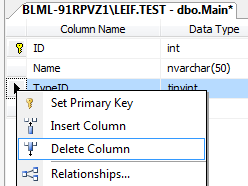 As I stated before, if there are any relationships that would also need to be deleted, it will ask you at this point if you would like to delete those as well. You will likely need to do so to delete the column.

If you are using C# and the Identity column is int, create a new instance of int without providing any value to it.It worked for me.

790
How can I list all foreign keys referencing a given table in SQL Server?
46
Deleting columns in MS SQL Server
1
How to remove multiple columns that have only one value across all rows in SQL Server 2008 R2
-1
compare and fetch column detail from same table