Why did deploying a single report also overwrite the data source?

We had a problem earlier when deploying a single report to the production environment, when, for reasons we don't understand, SSRS decided to also overwrite the Data Source associated with the report with settings that do not even match those currently in the project.

The steps we took were as follows:

Expected result: report definition on the prod server overwritten with the new report. Data Source completely unchanged, because why would it be? We didn't deploy that (and in any case, the one in the project is pointing to prod, so it shouldn't even matter if it did)

Actual result: Report overwritten as expected. Data Source also overwritten... with the old dev settings. Not the ones currently in the project. All the other reports sharing this data source suddenly stop working or display dev server data.

What are we doing wrong? SSRS quietly overwriting the associated Data Source on the server when deploying a single report seems dangerous (we would likely have missed that it had even happened, had the data on these particular dev and live environments been similar enough) so I presume we are missing something we should be doing/checking when deploying reports, but are at a loss as to exactly what.

That is configuration to copy your datasources and datasets to the report portal or not. You can change the configuration by right click on your report project and select properties that will open up the property pages. There is an option to overwrite default settings. Please check below image for more details 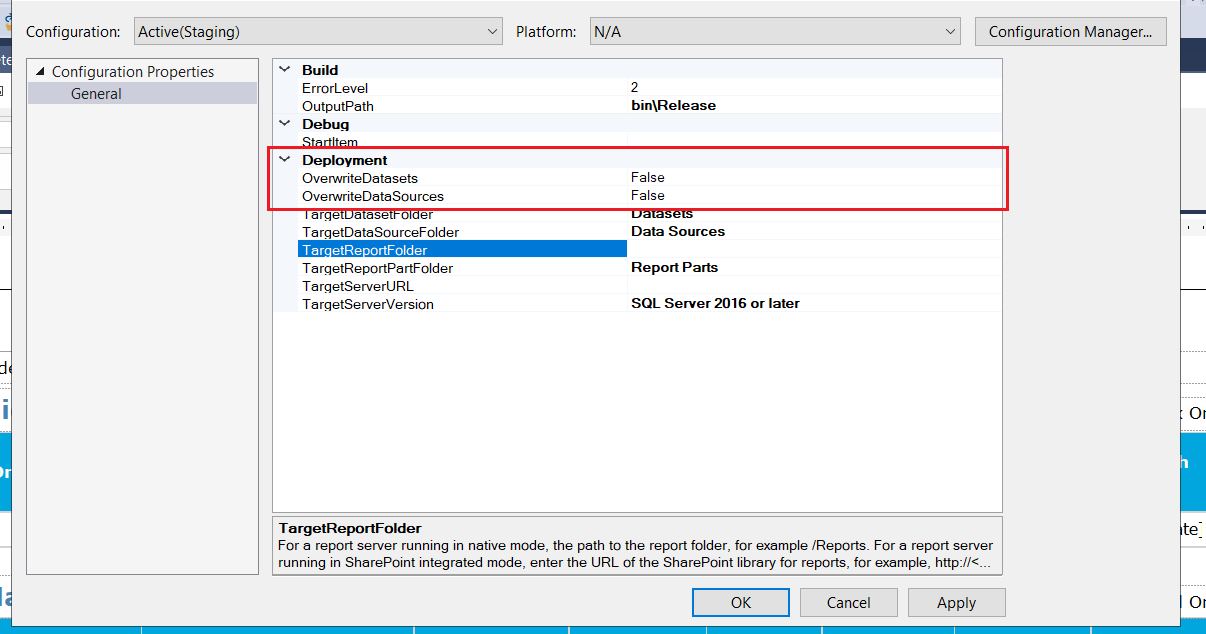 By using the above configuration it will deploy dataset and data sources on SSRS server only if it is not exists on the server.

Hope this will work.

Not the answer you're looking for? Browse other questions tagged reporting-services deployment ssrs-2012 or ask your own question.