Why is heap slower than sort for K Closest Points to Origin?

The coding task is here

According to the explanation here, Python's heapq.nsmallest is O(n log(t)), and Python List.sort() is O(n log(n)). However, my submission results show that sort is faster than heapq. How did this happen? Theoretically, it's the contrary, isn't it?

As has been discussed, the fast implementation the sort using tim sort in python is one factor. The other factor here is that heap operations is not as cache-friendly as merge sort and insertion sort are(tim sort is the hybrid of these two).

Each time you are doing the percolate up/down operations after adding/removing an element to/from the heap, it tries to access to parent/children nodes that are far away from the current index. This is not cache-friendly. This is also why heap sort is generally slower than quick sort, albeit both of them are asymptotically the same.

Let's pick the definition of Big-O notation from the Wikipedia:

Big O notation is a mathematical notation that describes the limiting behavior of a function when the argument tends towards a particular value or infinity.

In computer science, big O notation is used to classify algorithms according to how their running time or space requirements grow as the input size grows.

So Big-O is similar to:

So when you are comparing two algorithms on the small ranges/numbers, you can't strongly rely on Big-O. Let's analyze the example:

The similar behaviour is in your functions. I timed them with various input lengths and constructed timing plots. Here is timings for your functions on big numbers (yellow is sort, blue is heap): 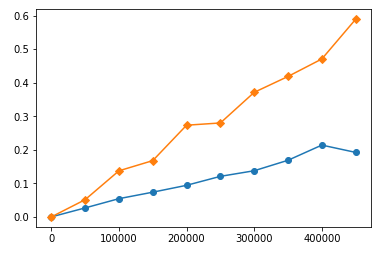 You can see that sort is consuming more time than heap, and the time is raising faster than heap's. But if we will look closer on lower range: 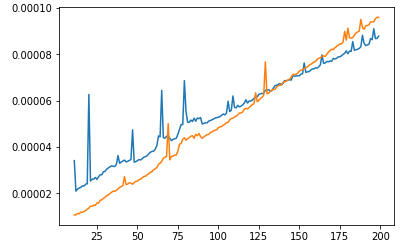 Here is the timing code for the first plot:

Not the answer you're looking for? Browse other questions tagged python algorithm sorting complexity-theory heapq or ask your own question.

362
Why is quicksort better than mergesort?
315
What is stability in sorting algorithms and why is it important?
1894
Why is reading lines from stdin much slower in C++ than Python?
286
Why are some float < integer comparisons four times slower than others?
715
Why is [] faster than list()?
3
Python - Get largest number in heap that is less than n
92
Why is max slower than sort?
0
From LeetCode Given an array of integers, return indices of the two numbers such that they add up to a specific target