Why is a `for` loop so much faster to count True values?

I recently answered a question on a sister site which asked for a function that counts all even digits of a number. One of the other answers contained two functions (which turned out to be the fastest, so far):

In addition I looked at using a list comprehension and list.count:

The first two functions are essentially the same, except that the first one uses an explicit counting loop, while the second one uses the built-in sum. I would have expected the second one to be faster (based on e.g. this answer), and it is what I would have recommended turning the former into if asked for a review. But, it turns out it is the other way around. Testing it with some random numbers with increasing number of digits (so the chance that any single digit is even is about 50%) I get the following timings: 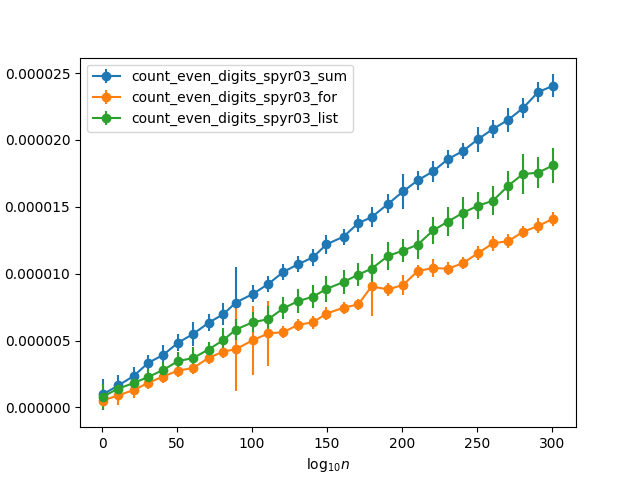 Why is the manual for loop so much faster? It's almost a factor two faster than using sum. And since the built-in sum should be about five times faster than manually summing a list (as per the linked answer), it means that it is actually ten times faster! Is the saving from only having to add one to the counter for half the values, because the other half gets discarded, enough to explain this difference?

Improves the timing only to the same level as the list comprehension.

When extending the timings to larger numbers, and normalizing to the for loop timing, they asymptotically converge for very large numbers (>10k digits), probably due to the time str(n) takes: 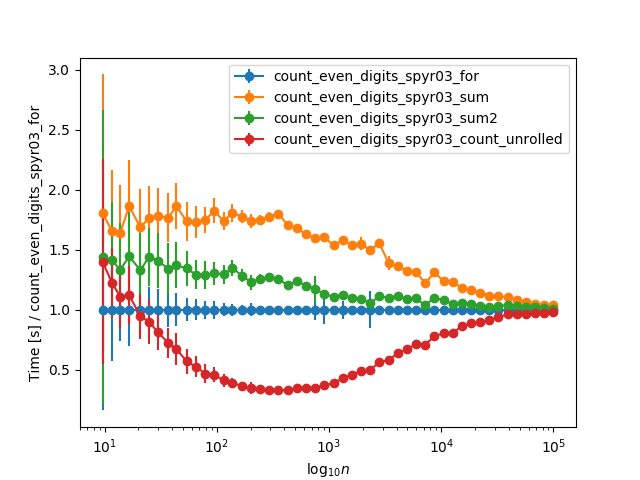 sum is quite fast, but sum isn't the cause of the slowdown. Three primary factors contribute to the slowdown:

If we replace the genexp with a list comprehension:

we see an immediate speedup, at the cost of wasting a bunch of memory on a list.

If you look at your genexp version:

you'll see it has no if. It just throws booleans into sum. In constrast, your loop:

only adds anything if the digit is even.

If we change the f2 defined earlier to also incorporate an if, we see another speedup:

It probably looked pretty awkward using True instead of 1 in f3. That's because changing it to 1 activates one final speedup. sum has a fast path for integers, but the fast path only activates for objects whose type is exactly int. bool doesn't count. This is the line that checks that items are of type int:

Once we make the final change, changing True to 1:

we see one last small speedup.

So after all that, do we beat the explicit loop?

Nope. We've roughly broken even, but we're not beating it. The big remaining problem is the list. Building it is expensive, and sum has to go through the list iterator to retrieve elements, which has its own cost (though I think that part is pretty cheap). Unfortunately, as long as we're going through the test-digits-and-call-sum approach, we don't have any good way to get rid of the list. The explicit loop wins.

Can we go further anyway? Well, we've been trying to bring the sum closer to the explicit loop so far, but if we're stuck with this dumb list, we could diverge from the explicit loop and just call len instead of sum:

Testing digits individually isn't the only way we can try to beat the loop, too. Diverging even further from the explicit loop, we can also try str.count. str.count iterates over a string's buffer directly in C, avoiding a lot of wrapper objects and indirection. We need to call it 5 times, making 5 passes over the string, but it still pays off:

Unfortunately, this is the point when the site I was using for timing stuck me in the "tarpit" for using too many resources, so I had to switch sites. The following timings are not directly comparable with the timings above:

If we use dis.dis(), we can see how the functions actually behave.

We can see that there's only one function call, that's to str() at the beginning:

Rest of it is highly optimized code, using jumps, stores, and inplace adding.

While I can't perfectly explain the differences, we can clearly see that there are more function calls (probably sum() and in(?)), which make the code run much slower than executing the machine instructions directly.

@MarkusMeskanen's answer has the right bits – function calls are slow, and both genexprs and listcomps are basically function calls.

Anyway, to be pragmatic:

Using str.count(c) is faster, and this related answer of mine about strpbrk() in Python could make things faster still.

There are a few differences that actually contribute to the observed performance differences. I aim to give a high-level overview of these differences but try not to go too much into the low-level details or possible improvements. For the benchmarks I use my own package simple_benchmark.

Generators vs. for loops

Generators and generator expressions are syntactic sugar that can be used instead of writing iterator classes.

Or a generator expression:

That will be transformed (behind the scenes) into a state machine that is accessible through an iterator class. In the end it will be roughly equivalent to (although the actual code generated around a generator will be faster):

So a generator will always have one additional layer of indirection. That means that advancing the generator (or generator expression or iterator) means that you call __next__ on the iterator that is generated by the generator which itself calls __next__ on the object you actually want to iterate over. But it also has some overhead because you actually need to create one additional "iterator instance". Typically these overheads are negligible if you do anything substantial in each iteration.

Just to provide an example how much overhead a generator imposes compared to a manual loop: 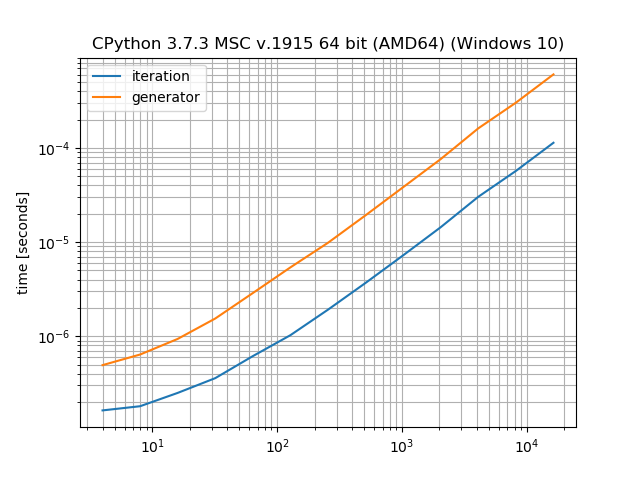 Generators have the advantage that they don't create a list, they "produce" the values one-by-one. So while a generator has the overhead of the "iterator class" it can save the memory for creating an intermediate list. It's a trade-off between speed (list comprehension) and memory (generators). This has been discussed in various posts around StackOverflow so I don't want to go into much more detail here. 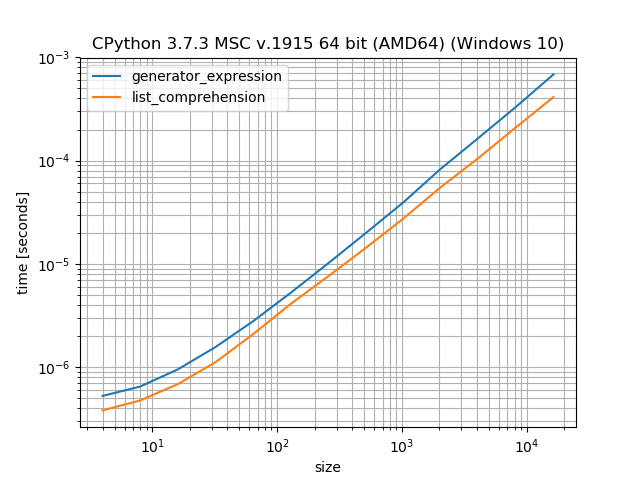 sum should be faster than manual iteration

Yes, sum is indeed faster than an explicit for loop. Especially if you iterate over integers. 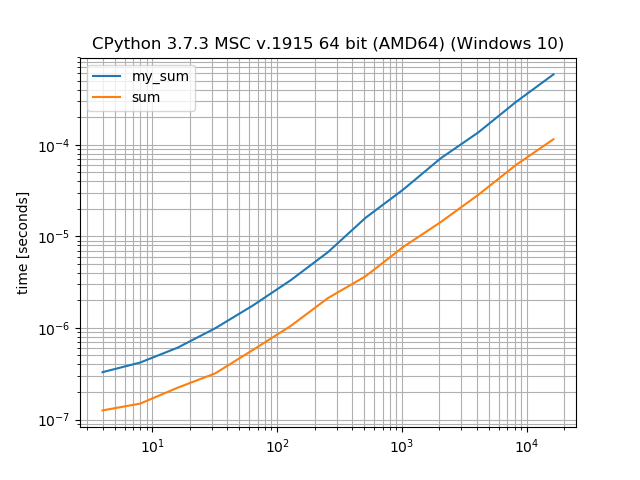 String methods vs. Any kind of Python loop

To understand the performance difference when using string methods like str.count compared to loops (explicit or implicit) is that strings in Python are actually stored as values in an (internal) array. That means a loop doesn't actually call any __next__ methods, it can use a loop directly over the array, this will be significantly faster. However it also imposes a method lookup and a method call on the string, that's why it's slower for very short numbers. 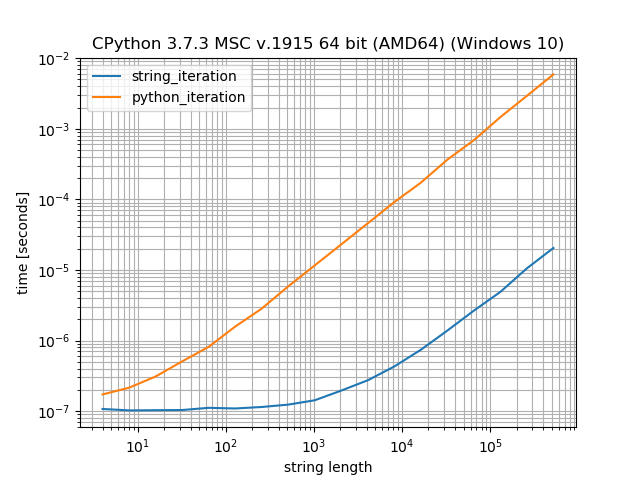 Why do all of them converge for large numbers?

This is actually because the number to string conversion will be dominant there. So for really huge numbers you're essentially just measuring how long it takes to convert that number to a string.

You'll see the difference if you compare the versions that take a number and convert it to a string with the one that take the converted number (I use the functions from another answer here to illustrate that). Left is the number-benchmark and on the right is the benchmark that takes the strings - also the y-axis is the same for both plots: 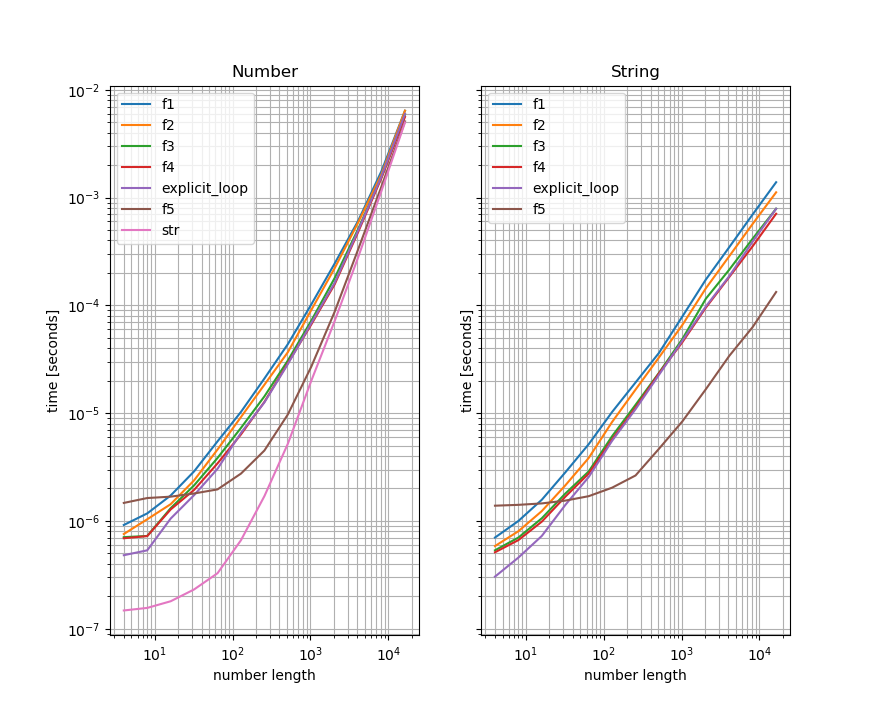 All your functions contain equal number of calls to str(n) (one call) and c in "02468" (for every c in n). Since then I would like to simplify:

The key difference between these two functions is that in count_simple_for you are iterating only throw num with pure for loop for c in num, but in count_simple_sum your are creating a generator object here (from @Markus Meskanen answer with dis.dis):

7
Why is the 'all' implementation slower than writing a for loop
16
Count the identical pairs in two lists
18
Python built-in sum function vs. for loop performance
2
strpbrk() in Python
2
What are the true time complexities of working with sets/dicts?

2014
Why is using "for...in" for array iteration a bad idea?
1464
How can I check for NaN values?
2401
Why are elementwise additions much faster in separate loops than in a combined loop?
2109
Why is reading lines from stdin much slower in C++ than Python?
26626
Why is processing a sorted array faster than processing an unsorted array?
903
Why does Python code run faster in a function?
973
Swift Beta performance: sorting arrays
1589
Replacing a 32-bit loop counter with 64-bit introduces crazy performance deviations with _mm_popcnt_u64 on Intel CPUs
778
Why is [] faster than list()?
918
Why does C++ code for testing the Collatz conjecture run faster than hand-written assembly?