How to make github follow directory history after renames?

Is there a way to force the "history" function on the GitHub web UI to use "--follow"?

Alternatively - is there any way to see pre-rename history on GitHub?

I like this.
There could be other issues preventing us from plopping the --follow argument in.
I'll take a look and let you know.

Note: Git 2.6.0 has been released and includes this feature. Following path changes in the log command can be enabled by setting the log.follow config option to true as in:

I wrote a chrome extension to enable this. Source on github. 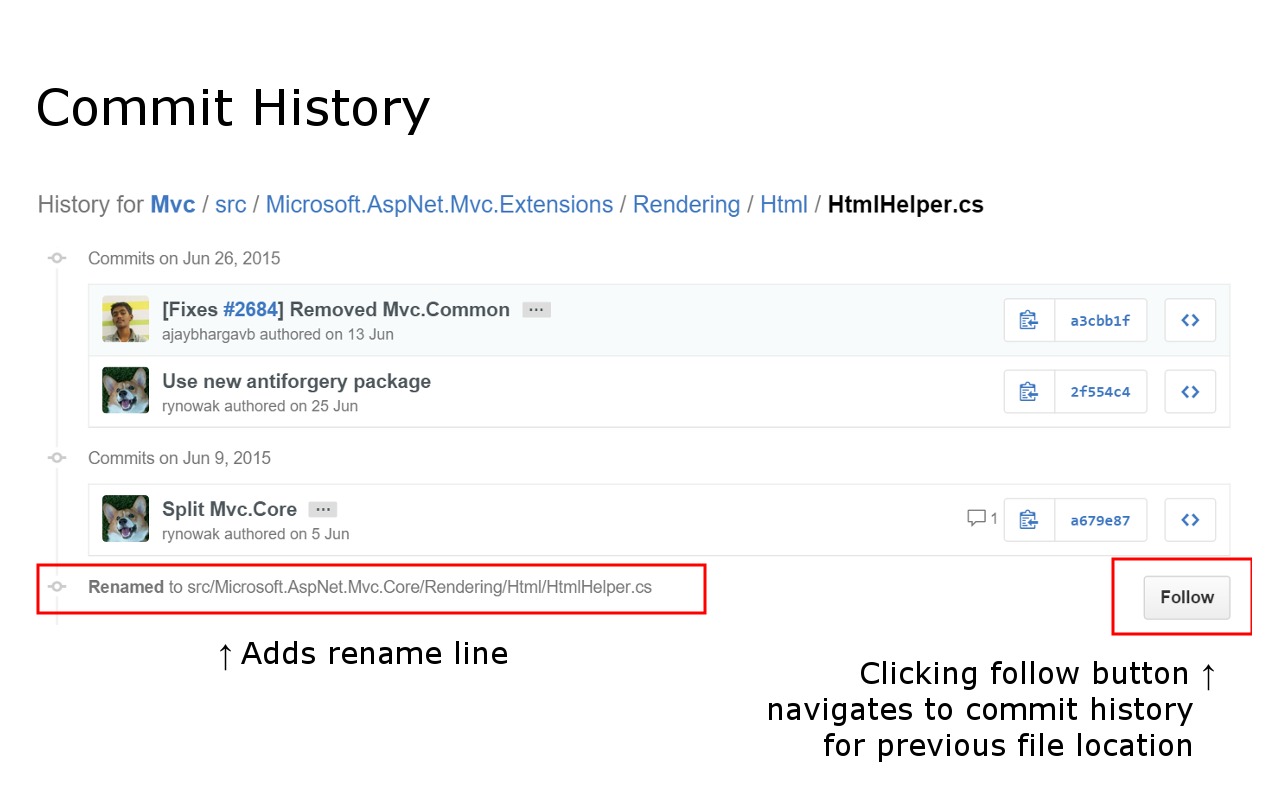 Will "git --follow" functionality ever be implemented on Github? If yes, where can I track its progress?

(By "git --follow", I mean a way to easily see the object revisions before a rename. Currently, when an item is renamed, Github doesn't offer an easy way to display the directory / file history.)

> Will "git --follow" functionality ever be implemented on Github? If yes, where can I track its progress?

This is something a few other users have requested as well -- we might add it in the future. We currently don't have a public issue tracker, but I'll put another +1 next to it on the Feature Request List™ for the team to see.

To get such functionality in the meantime, I guess you could write a user script that looks up the hash of the parent object, (recursively) look up its history and render the result.

github or ask your own question.

20
Why does git log not default to git log --follow?
28
See history in GitHub after folder rename
17
How does Git track history during a refactoring?
2
How to move a file (while preserving the history) and create one with the same name in git?
0
Why GitHub doesn't display the file history when the commit history does?
1
bfg or filter-branch to correct history
-2
How can I navigate to a previous commit after a file has been moved?

381
Is it possible to create a remote repo on GitHub from the CLI without opening browser?
1511
How to remove a directory from git repository?
1616
Download a single folder or directory from a GitHub repo
4413
How do I update or sync a forked repository on GitHub?
2819
How to add images to README.md on GitHub?
1101
How to install an npm package from GitHub directly
355
How can I move a Git repository with all branches from Bitbucket to GitHub?
572
gpg failed to sign the data fatal: failed to write commit object [Git 2.10.0]