IDE and Debugger for node.js [closed]

I am going to start building project in node.js (was working in PHP before), What is the IDE, Debugger and Helping Tools for node.js, to help improvement while coding ?

There are several IDEs which support Node.js natively:

Other than these two you can use almost any code editor/IDE which simplifies JavaScript based development in general (for example with syntax highlighting, autocompletion or similar stuff) and use node with its built-in V8 debugger.

Koding is another good choice. It comes preinstalled with Node.js, Vim and Emacs, has a great community of developers, among many other things. Another few notable features are:

vim and unix are your IDE.

If you want debugging then there is node debug foo.js or ndb or node-inspector or use the V8 Debugger.

Another option could be Netbeans with the NodeJS tools (even though I'm not using it anymore these days since I've been using JetBrains products now to be honest).

What it gives you:

Also NetBeans 8.1 and 8.2 seem to have brought some features for Node.js developers (see here and here).

Eclipse is a good IDE for JavaScript.

To build an IDE with support for editing JS with syntax highlights and some degree of code completion, executing node from the IDE, debugging in the IDE, unit testing with nodeunit and fetching dependencies via NPM.

I've tested several IDE's to develop and run node apps. But I'm feeling very confortable with Microsoft WebMatrix 2.0. It's a nice lightweight and free IDE that you can run Node. There's some templates for Express framework to get started. And you can run nodejs processes through IIS Express. 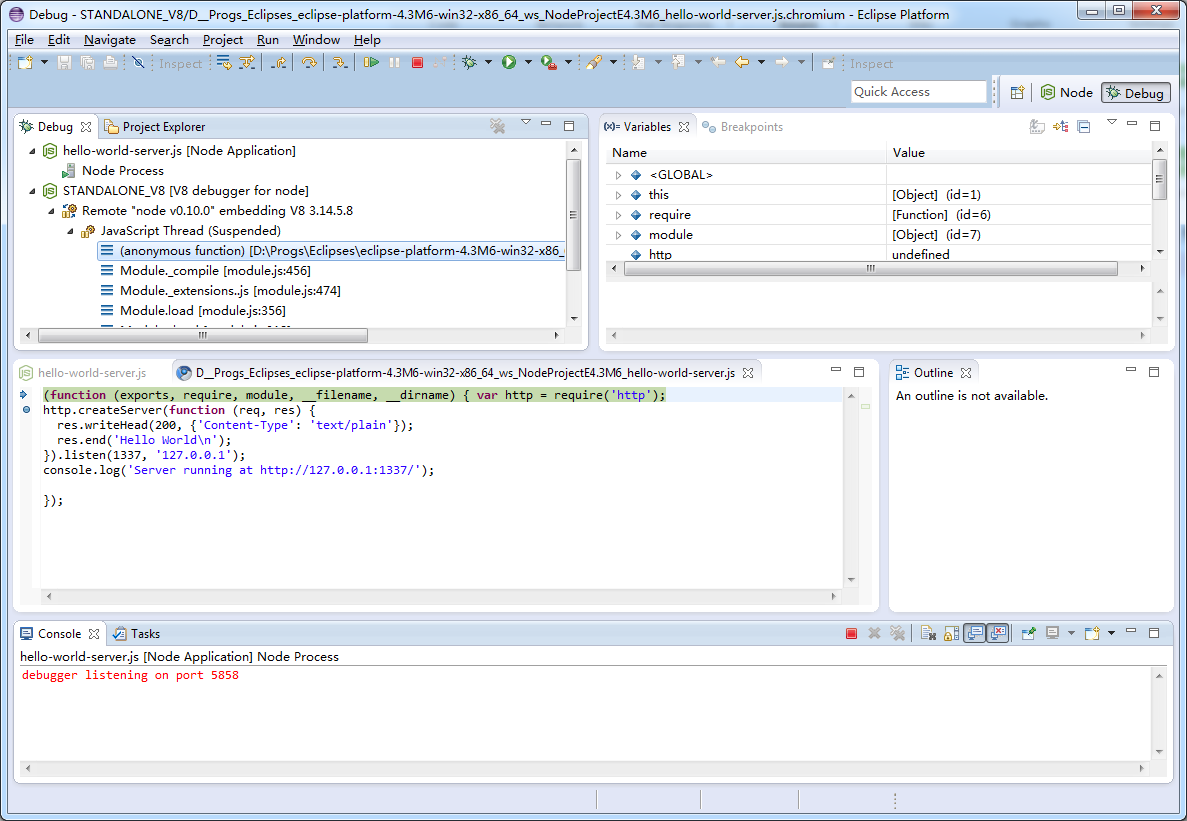 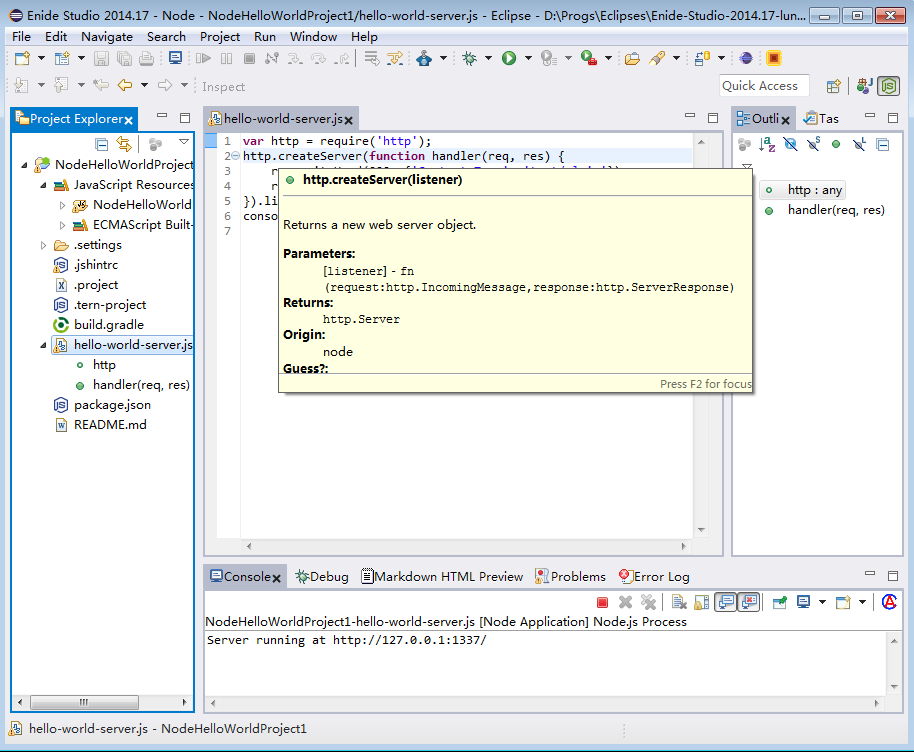 Personally, I'm partial to Cloud9's IDE though they've had a few issues lately with various upgrades, and the growing pains of online systems can be an issue.

WebStorm 4 is another option, though I haven't tried it, I did try the plugin in WS3, which wasn't too bad.

From Microsoft (of all places) there's WebMatrix 2 from Microsoft that seems to support Node.JS pretty well. I have discovered that you can actually edit node based js files within the Visual Studio 2012 beta and get intellisense/autocomplete for node scripts probably from webmatrix's developments. I've been using node as a build step for CSS/JS processing, and it's been working well for me.

Aptana Studio and others seem to be scrambling to add proper node support. Right now options are relatively limited, but getting better.

What framework are you using for the frontend? If you're already familiar with Node, you might as well try the open-source and increasingly popular Meteor.JS framework. Check out MeteorPad for literally a one-click IDE for Meteor apps.

You get a virtual machine with MongoDB on it and the Meteor server. A sample project is already loaded, and you can edit the server and client HTML, JS and CSS files. The resulting app runs in the right pane. Makes playing with Meteor super, super easy.

Node is a relatively new project so there is not widespread IDE support yet. However there actually is an online IDE called Cloud9 IDE that you might want to check out. Otherwise I suggest you use a local editor such as vim or emacs.

Facebook's Nuclide has a number of IDE-esque features including dynamic typechecking (via flow), in-code linking, auto complete, etc. It's based on GitHub's Atom so you can pick and choose Nuclide packages as you see fit.

WebStorm 3.0 does all this stuff. It auto completes in a smart way, includes nice debugging and unit testing. It also include number of inspection for javascript, which is also pleasant. Now RC version is available, but JetBrains assure that it'll be released soon.

1693
How do I debug Node.js applications?
9
Node IDE auto-complete and debugging
0
how to determine source information of callback in v8