Is it possible to opt-out of dark mode on iOS 13?

A large part of my app consists of web views to provide functionality not yet available through native implementations. The web team has no plans to implement a dark theme for the website. As such, my app will look a bit half/half with Dark Mode support on iOS 13.

Is it possible to opt out of Dark Mode support such that our app always shows light mode to match the website theme?

First, here is Apple's entry related to opting out of dark mode. The content at this link is written for Xcode 11 & iOS 13:

This section applies to Xcode 11 usage

If you wish to opt out your ENTIRE application

Use the following key in your info.plist file:

And assign it a value of Light.

The XML for the UIUserInterfaceStyle assignment:

You can set overrideUserInterfaceStyle against the app's window variable.

Depending on how your project was created, this may be in the AppDelegate file or the SceneDelegate.

How the above code will look in Xcode 11:

If you are using Xcode 11 for your submission, you can safely ignore everything below this line.

Since the relevant API does not exist in iOS 12, you will get errors when attempting to use the values provided above:

For setting overrideUserInterfaceStyle in your UIViewController

This can be handled in Xcode 10 by testing the compiler version and the iOS version:

If you wish to opt out your ENTIRE application

You can modify the above snippet to work against the entire application for Xcode 10, by adding the following code to your AppDelegate file.

However, the plist setting will fail when using Xcode version 10.x: 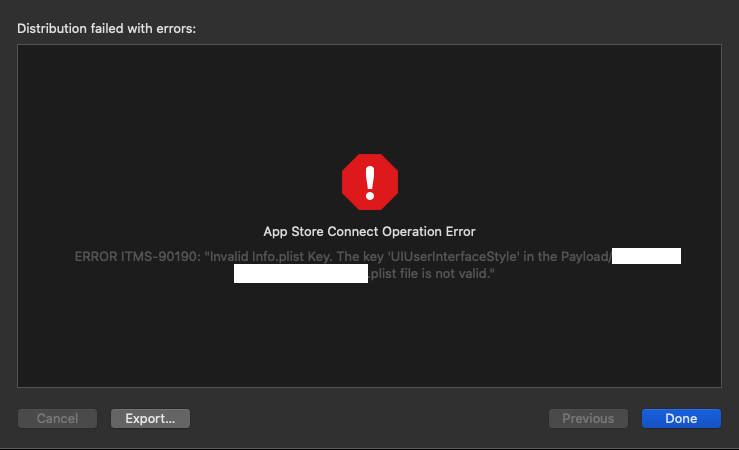 Credit to @Aron Nelson, @Raimundas Sakalauskas, @NSLeader and rmaddy for improving this answer with their feedback.

As already mentioned by SeanR, you can set UIUserInterfaceStyle to Light or Dark in your app's plist file to change this for your whole app.

If you are not using Xcode 11 or later (i,e iOS 13 or later SDK), your app has not automatically opted to support dark mode. So, there's no need to opt out of dark mode.

If you are using Xcode 11 or later, the system has automatically enabled dark mode for your app. There are two approaches to disable dark mode depending on your preference. You can disable it entirely or disable it for any specific window, view, or view controller.

You can disable dark mode by including the UIUserInterfaceStyle key with a value as Light in your app’s Info.plist file.

This ignores the user's preference and always applies a light appearance to your app.

You can force your interface to always appear in a light or dark style by setting the overrideUserInterfaceStyle property of the appropriate window, view, or view controller.

Note: Apple strongly encourages to support dark mode in your app. So, you can only disable dark mode temporarily.

Add this to info.plist before </dict></plist>

EDIT: As per dorbeetle's answer, a more appropriate setting for UIUserInterfaceStyle may be Light.

The answer above works if you want to opt out the whole app. If you are working on the lib that has UI, and you don't have luxury of editing .plist, you can do it via code too.

If you are compiling against iOS 13 SDK, you can simply use following code:

HOWEVER, if you want your code to compile against iOS 12 SDK too (which right now is still the latest stable SDK), you should resort to using selectors. Code with selectors:

Swift (XCode will show warnings for this code, but that's the only way to do it for now as property does not exist in SDK 12 therefore won't compile):

Xcode 12 and iOS 14 update. I have try the previous options to opt-out dark mode and this sentence in the info.plist file is not working for me:

Now it is renamed to:

This setting will block all dark mode in the full app.

Fixed typo thank you to @sarah

You can turn Dark Mode off in entire application in Xcode 11:

If you're using Xcode 10.x, then the default UIUserInterfaceStyle is light for iOS 13.x. When run on an iOS 13 device, it will work in Light Mode only.

No need to explicitly add the UIUserInterfaceStyle key in Info.plist file, adding it will give an error when you Validate your app, saying:

Invalid Info.plist Key. The key 'UIUserInterfaceStyle' in the Payload/AppName.appInfo.plist file is not valid.

Only add the UIUserInterfaceStyle key in Info.plist file when using Xcode 11.x.

If you will add UIUserInterfaceStyle key to the plist file, possibly Apple will reject release build as mentioned here: https://stackoverflow.com/a/56546554/7524146 Anyway it's annoying to explicitly tell each ViewController self.overrideUserInterfaceStyle = .light. But you can use this peace of code once for your root window object:

Just notice you can't do this inside application(application: didFinishLaunchingWithOptions:) because for this selector will not respond true at that early stage. But you can do it later on. It's super easy if you are using custom AppPresenter or AppRouter class in your app instead of starting UI in the AppDelegate automatically.

You can get the window from SceneDelegate

- For a single ViewController:

- For a single View:

You can set any view, even inside the view itself

Apart from other responses, from my understanding of the following, you only need to prepare for Dark mode when compiling against iOS 13 SDK (using XCode 11).

The system assumes that apps linked against the iOS 13 or later SDK support both light and dark appearances. In iOS, you specify the specific appearance you want by assigning a specific interface style to your window, view, or view controller. You can also disable support for Dark Mode entirely using an Info.plist key.

My app does not support dark mode as of now and uses a light app bar color. I was able to force the status bar content to dark text and icons by adding the following key to my Info.plist:

Don't forget to set the app bar brightness attribute on your Flutter app bar like this:

Yes you can skip by adding the following code in viewDidLoad:

Here are a few tips and tricks which you can use in your app to support or bypass the dark mode.

you can override the interface style of UIViewController by

Simply you can add a new key

in your app info.plist and set its value to Light or Dark. this will override the app default style to the value you provide. You don't have to add overrideUserInterfaceStyle = .light this line in every viewController, just one line in info.plist that’s it.

This will force app to run in light mode only.

In Xcode 12, you can change add as "appearances". This will work!!

Add this to info.plist

I would use this solution since window property may be changed during the app life cycle. So assigning "overrideUserInterfaceStyle = .light" needs to be repeated. UIWindow.appearance() enables us to set default value that will be used for newly created UIWindow objects.

You can do: add this new key UIUserInterfaceStyle to Info.plist and set its value to Light. and check alert controller appears with light mode.

This question has so many answers, rather using it in info.plist you can set it in AppDelegate like this:

Actually I just wrote some code that will allow you to globally opt out of dark mode in code without having to putz with every single viw controller in your application. This can probably be refined to opt out on a class by class basis by managing a list of classes. For me, what I want is for my users to see if they like the dark mode interface for my app, and if they don't like it, they can turn it off. This will allow them to continue using dark mode for the rest of their applications.

User choice is good (Ahem, looking at you Apple, this is how you should have implemented it).

So how this works is that it's just a category of UIViewController. When it loads it replaces the native viewDidLoad method with one that will check a global flag to see if dark mode is disabled for everything or not.

Because it is triggered on UIViewController loading it should automatically start up and disable dark mode by default. If this is not what you want, then you need to get in there somewhere early and set the flag, or else just set the default flag.

I haven't yet written anything to respond to the user turning the flag on or off. So this is basically example code. If we want the user to interact with this, all the view controllers will need to reload. I don't know how to do that offhand but probably sending some notification is going to do the trick. So right now, this global on/off for dark mode is only going to work at startup or restart of the app.

Now, it's not just enough to try to turn off dark mode in every single MFING viewController in your huge app. If you're using color assets you are completely boned. We for 10+ years have understood immutable objects to be immutable. Colors you get from the color asset catalog say they are UIColor but they are dynamic (mutable) colors and will change underneath you as the system changes from dark to light mode. That is supposed to be a feature. But of course there is no master toggle to ask these things to stop making this change (as far as I know right now, maybe someone can improve this).

So the solution is in two parts:

The UIColor category doesn't need to be exposed, it just works calling colorNamed: ... if you didn't tell the DarkMode ViewController class to block dark mode, it will work perfectly nicely as expected. Trying to make something elegant instead of the standard apple sphaghetti code which is going to mean you're going to have to modify most of your app if you want to programatically opt out of dark mode or toggle it. Now I don't know if there is a better way of programatically altering the Info.plist to turn off dark mode as needed. As far as my understanding goes that's a compile time feature and after that you're boned.

So here is the code you need. Should be drop in and just use the one method to set the UI Style or set the default in the code. You are free to use, modify, do whatever you want with this for any purpose and no warranty is given and I don't know if it will pass the app store. Improvements very welcome.

Fair warning I don't use ARC or any other handholding methods.

There is a set of utility functions that this uses for doing method swapping. Separate file. This is standard stuff though and you can find similar code anywhere.

I'm copying and pasting this out of a couple of files since the q-runtime.h is my reusable library and this is just a part of it. If something doesn't compile let me know.

Not the answer you're looking for? Browse other questions tagged ios ios13 ios-darkmode or ask your own question.

404
Design for Facebook authentication in an iOS app that also accesses a secured web service
12
iOS 13.0 - Best approach for supporting Dark Mode and also support iOS 11 & 12
220
How to use dark mode in simulator iOS 13?
2
Implementing dark mode in React Native sensibly
10
Why doesn't my iOS app disable dark mode?
1
Should we add two images for dark mode and light mode in ios13
2
Is there any way to override the (dark/light) user interface style of iOS 13 Context Menus?
0
Is UISegmentedControl just not usable currently?