I know there are other tools around like awstats or splunk, but I wonder whether there is some serious (web)server logfile analysis going on in R. I might not be the first thought to do it in R, but still R has nice visualization capabilities and also nice spatial packages. Do you know of any? Or is there a R package / code that handles the most common log file formats that one could build on? Or is it simply a very bad idea?

In connection with a project to build an analytics toolbox for our Network Ops guys, i built one of these about two months ago. My employer has no problem if i open source it, so if anyone is interested i can put it up on my github repo. I assume it's most useful to this group if i build an R Package. I won't be able to do that straight away though because i need to research the docs on package building with non-R code (it might be as simple as tossing the python bytecode files in /exec along with a suitable python runtime, but i have no idea).

I was actually suprised that i needed to undertake a project of this sort. There are at least several excellent open source and free log file parsers/viewers (including the excellent Webalyzer and AWStats) but neither parse server error logs (parsing server access logs is the primary use case for both).

If you are not familiar with error logs or with the difference between them and access logs, in sum, Apache servers (likewsie, nginx and IIS) record two distinct logs and store them to disk by default next to each other in the same directory. On Mac OS X, that directory in /var, just below root:

For network diagnostics, error logs are often far more useful than the access logs. They also happen to be significantly more difficult to process because of the unstructured nature of the data in many of the fields and more significantly, because the data file you are left with after parsing is an irregular time series--you might have multiple entries keyed to a single timestamp, then the next entry is three seconds later, and so forth.

i wanted an app that i could toss in raw error logs (of any size, but usually several hundred MB at a time) have something useful come out the other end--which in this case, had to be some pre-packaged analytics and also a data cube available inside R for command-line analytics. Given this, i coded the raw-log parser in python, while the processor (e.g., gridding the parser output to create a regular time series) and all analytics and data visualization, i coded in R.

I have been building analytics tools for a long time, but only in the past four years have i been using R. So my first impression--immediately upon parsing a raw log file and loading the data frame in R is what a pleasure R is to work with and how it is so well suited for tasks of this sort. A few welcome suprises:

A couple of examples of the last bullet: 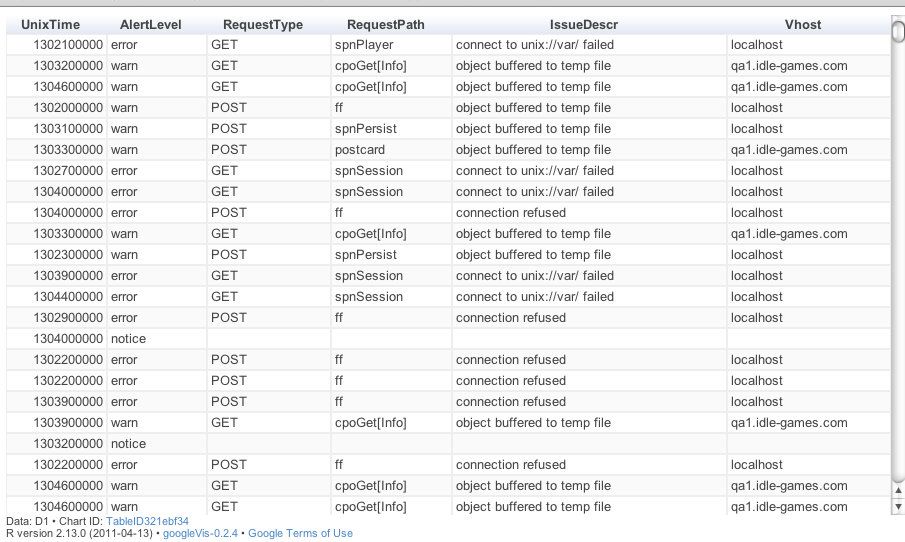 It is in fact an excellent idea. R also has very good date/time capabilities, can do cluster analysis or use any variety of machine learning alogorithms, has three different regexp engines to parse etc pp.

And it may not be a novel idea. A few years ago I was in brief email contact with someone using R for proactive (rather than reactive) logfile analysis: Read the logs, (in their case) build time-series models, predict hot spots. That is so obviously a good idea. It was one of the Department of Energy labs but I no longer have a URL. Even outside of temporal patterns there is a lot one could do here.

I have used R to load and parse IIS Log files with some success here is my code.

I did a logfile-analysis recently using R. It was no real komplex thing, mostly descriptive tables. R's build-in functions were sufficient for this job.
The problem was the data storage as my logfiles were about 10 GB. Revolutions R does offer new methods to handle such big data, but I at last decided to use a MySQL-database as a backend (which in fact reduced the size to 2 GB though normalization).
That could also solve your problem in reading logfiles in R.

This format can easily be read into R using read.csv. And, it doesn't require any 3rd party libraries.

Not the answer you're looking for? Browse other questions tagged r logfile-analysis or ask your own question.

26
Identifying dependencies of R functions and scripts
33
Round a POSIX date (POSIXct) with base R functionality
9
Creating reports in R
38
How can I tell when my dataset in R is going to be too large?
445
Cluster analysis in R: determine the optimal number of clusters
814
data.table vs dplyr: can one do something well the other can't or does poorly?
8
Is it bad style to redefine non-S3 base functions as S3 functions in an R package?
2
Historic Maps in R