Flutter is designed to address the needs of applications written in any of the world's currently-used languages, whether they use a right-to-left or left-to-right writing direction. Flutter does not support other writing modes, such as vertical text or boustrophedon text, as these are rarely used in computer programs. (emphasis added)

Not only does Flutter not support vertical text, it won't be officially supported in the future. This was an early design decision (see here and here).

It is written top to bottom, and lines wrap left to right: 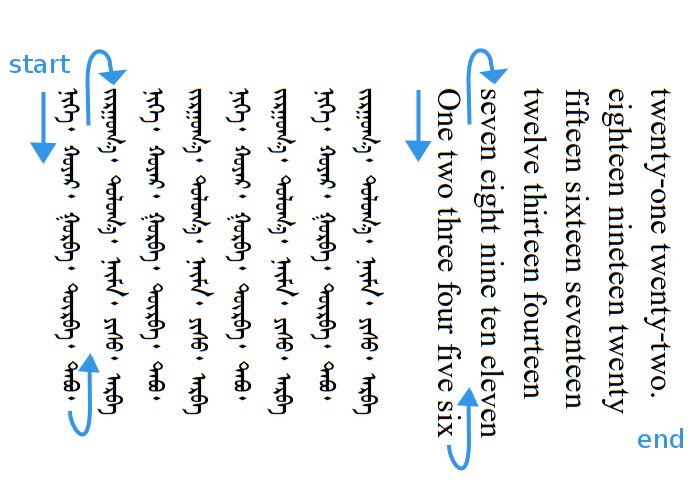 Additionally, emoji and CJK characters retain the their orientation when displayed vertically (not absolutely necessary, but preferred). In the image below, the top paragraph shows the current implementation and the bottom paragraph shows the correct vertical rendering: 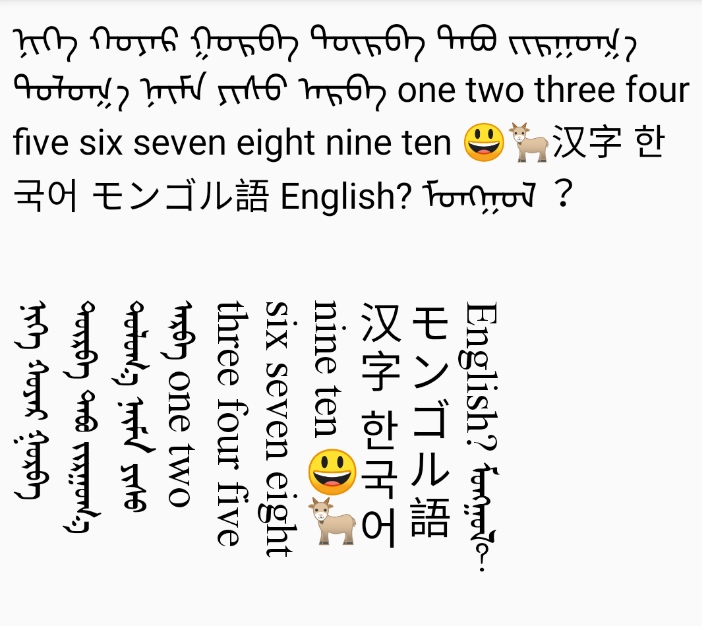 Since Flutter doesn't support vertical script, it must be implemented from scratch. All of the actual text layout and painting is done in the Flutter engine with LibTxt, so I can't change that.

What would it involve to create a top to bottom vertical Text widget?

I'm still looking for an answer. Rémi's answer is good for single line text but doesn't work for multi-line text.

All of those would involve measuring the text, laying it out, and getting an list of lines.

I'm currently leaning toward making a custom widget and render object that will mimic RichText and RenderParagraph. Under the hood RenderParagraph uses a TextPainter to layout and paint the text. My problem now is that TextPainter is tightly coupled to the underlying Skia LibTxt library. That is where all the actual layout and painting happens. Laying out the text in anything besides the default ltr and rtl is proving to be a big problem.

The accepted answer meets the criteria I put forth in this question. I think it will meet short term needs. I have some reservations for things like applying text style, but I will need to do more tests. Long term I may still try to do custom text layout and painting.

This solution is based on a flex-box layout. It converts the string to a list of words and puts them in vertically rotated Text widgets. These are laid out with a Wrap widget set to Axis.vertical. The Wrap widget automatically handles words that need to wrap by putting them in the next column.

Sideway text is possible using RotatedBox, which is enough for the text to correctly wrap as you'd expect.

Similarly, Flutter now supports inline widgets inside text. This can be used to rotate smileys inside a text.

If you make custom font with all symbols rotated by 180° (hard part), then you can simple change textDirection to TextDirection.rtl (right-to-left) and rotate text by one quarter (not easy too).

I ended up creating a custom widget to handle text rendering. 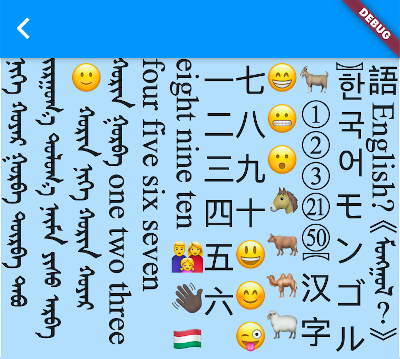 It wasn't a trivial task, but it is flexible. Other visitors to this question can follow a similar pattern if the other answers don't meet your needs.

If you would like more control over text rendering in Flutter, read My First Disappointment with Flutter and add a comment to this GitHub issue.

Its Simple draw what you want

Not the answer you're looking for? Browse other questions tagged flutter dart custom-widgets mongolian-vertical-script or ask your own question.

46
How do you make a vertical text UILabel and UITextView for iOS in Swift?
3
Flutter: Vertical Text widget

46
How do you make a vertical text UILabel and UITextView for iOS in Swift?
7
How to make a traditional Mongolian script TextView in Android
3
How to make a traditional Mongolian script ListView in Android
14
How to offset a scaffold widget in Flutter?
9
Flutter align widgets in an expanded container, to the top left and bottom right?
3
Flutter Scrolling widget inside a Scrolling widget
2
Flutter: No Directionality widget found
0
Listview crash the application Flutter
0
How to reuse the same layout screen without creating a new widget tree branch