How to install (v142) Build tools in Visual studio

It will also show me an Alternate option I also tried it but not works.

The bottom line is that you need to install Visual Studio 2019 to access the v142 tools.

Along with different versions of Visual Studio (VS2015, VS2017, VS2019), Microsoft also releases different build tool versions as they continue to improve the compiler and provide additional capabilities and to meet updated language standards (C++, C++11, C++17, etc.). See Visual Studio 2015 not detecting v141 (2017) Build tools

See as well this Microsoft blog posting about build tools for VS2017 and accessing the older v140 from VS2015, Visual Studio Build Tools now include the VS2017 and VS2015 MSVC Toolsets.

You can use the Visual Studio installer to modify the build tools available by adding or removing from the list. This SO posting describes a similar problem but with v140 missing in a VS2015 Visual Studio installation. MSbuild Error: The builds tools for v140 (Platform Toolset = 'v140') cannot be found

However if Microsoft has not released a particular Build Tools version for the Visual Studio you are using then it will not show in the list of available toolsets.

It looks like beginning with VS2015, Microsoft is providing a standard Visual Studio engine that is shared among VS 2015, VS2017, and VS2019 with build tools and various components being updated to provide new features and functionality and new language standards compliance. There are dependencies between the Visual Studio version and what build tools and components can be used with the Visual Studio version, e.g. v142 is not available for VS2017, most probably to provide an incentive for purchasing the newer product.

As a side note, while doing a bit of discovery on this question, I have found some articles that indicate that if you have a recent Visual Studio installed and then install an earlier version of Visual Studio, the default target build tools can also change to the build tools for the earlier install.

In other words, if you have VS2019 with a default target of v142 already installed and then install VS2017, the default target will change to v141 requiring you to actually set the build target to v142 when using VS2019.

I had the same problem, but when trying to open a project made in VS2019 with VS2017, so I changed this in my project:

Go to: Project->Properties->General->Platform Toolset and change to the current version of your VS.

What I did is edited my .vcxproj, which is an MSBuild-format file, like this:

After, each Visual Studio Version uses its own toolset version:

On VS 2019, when opening a solution/project created with VS2017, i usually simply go to "projects" in the menu bar on the top and choose "retarget solution" (this probably sets the platform to V142).

on the contrary, on VS 2017, when opening the solution/project created with VS2019 (platform toolset v142),to allow it to work, I need to "downgrade" it to the platform v141. To do that, I right clic on the project (not the solution) and choose properties, then "general" and look for "platform toolset" that i set to "Visual studio 2017 (v141)" and then i can compile again without errors. 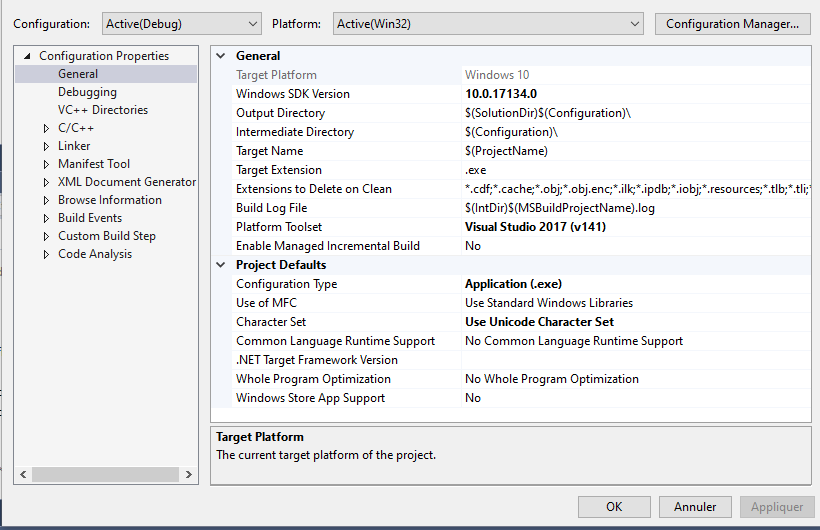 This worked for me: Go into the ProjectName.vcxproj file and remove the v142 build script and replace with the build script that corresponds to the Microsoft Visual Studio version you are using or remove the script and Retarget your project if it is an upgraded MVSC.

Not the answer you're looking for? Browse other questions tagged c++ visual-studio visual-studio-2017 or ask your own question.