numpy faster than numba and cython , how to improve numba code

I have a simple example here to help me understand using numba and cython. I am `new to both numba and cython. I've tried my best with to incorporate all the tricks to make numba fast and to some extent, the same for cython but my numpy code is almost 2x faster than numba (for float64), more than 2x faster if using float32. Not sure what I am missing here.

I was thinking perhaps the problem isn't coding anymore but more about compiler and such which I'm not very familiar with.

I've gone thru a lot of stackoverflow post about numpy, numba and cython and found no straight answers.

cython is close to numba. So the big question for me is why can't the numba beat the numpy's runtime? What did I do wrong or missing here ? How can other factors contribute and how do I find out ?

As we will see the behavior is dependent on which numpy-distribution is used.

This answer will focus on Anacoda-distribution with Intel's VML (vector math library), millage can vary given another hardware and numpy-version.

It will also be shown, how VML can be utilized via Cython or numexpr, in case one doesn't use Anacoda-distribution, which plugs-in VML under the hood for some numpy-operations.

I can reproduce your results, for the following dimensions

The lion's share (about 90%) of calculation-time is used for evaluation of exp- function, and as we will see, it is a CPU-intensive task.

Quick glance at the top-statistics show, that numpy's version is executed parallized, but this is not the case for numba. However, on my VM with only two processors the parallelization alone cannot explain the huge difference of factor 7 (as shown by DavidW's version nb_expsum2).

Profiling the code via perf for both versions shows the following:

As one can see: numpy uses Intel's parallized vectorized mkl/vml-version under the hood, which easily outperforms the version from the gnu-math-library (lm.so) used by numba (or by parallel version of numba or by cython for that matter). One could level the ground a little bit by using the parallization, but still mkl's vectorized version would outperform numba and cython.

However, seeing performance only for one size isn't very enlightening and in case of exp (as for other transcendental function) there are 2 dimensions to consider:

I'm using perfplot to visualize the result (see code in appendix). For "normal" range we get the following performaces: 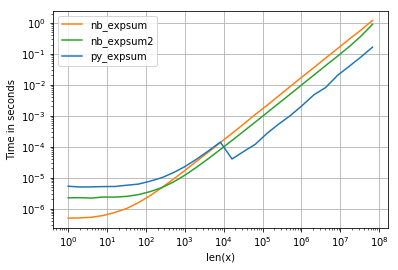 and while the performance for 0.0 is similar, we can see, that Intel's VML gets quite a negative impact as soon as results becomes infinite: 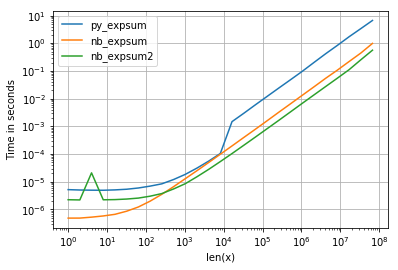 However there are other things to observe:

So what are the consequences?

NB: numba cannot automaticaly use vdExp from Intel's VML (as partly suggested in comments), because it calculates exp(x) individually, while VML operates on a whole array.

One could reduce cache misses when writing and loading data, which is performed by the numpy-version using the following algorithm:

However, I would not expect to gain more than 10% (but maybe I'm wrong)compared to numpy's version as 90% of computation time is spent in MVL anyway.

Nevertheless, here is a possible quick&dirty implementation in Cython:

However, it is exactly, what numexpr would do, which also uses Intel's vml as backend: 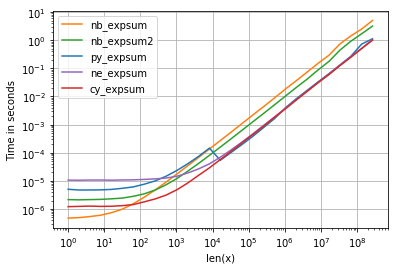 Add parallelization. In Numba that just involves making the outer loop prange and adding parallel=True to the jit options:

On my PC that gives a 3.2 times speedup over the non-parallel version. That said on my PC both Numba and Cython beat Numpy as written.

You can also do parallelization in Cython - I haven't tested it here but I'd expect to to be similar to Numba in performance. (Note also that for Cython you can get nx and ny from x.shape[0] and x.shape[1] so you don't have to turn off bounds-checking then rely entirely on user inputs to keep within the bounds).

It depends on the exp implementation and parallelization

If you use Intel SVML in Numpy, use it in other packages like Numba,Numexpr or Cython too. Numba performance tips

If the Numpy commands are parallelized also try to parallelize it in Numba or Cython. 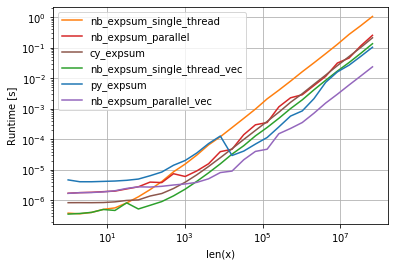 Check if SVML has been used

Can be useful to check if everything is working as expected.

Not the answer you're looking for? Browse other questions tagged python performance numpy cython numba or ask your own question.

495
Most efficient way to map function over numpy array
126
Efficient evaluation of a function at every cell of a NumPy array
14
Why does numpy.sin return a different result if the argument size is greater than 8192?
3
Fastest Python log-sum-exp in a 'reduceat'
-1
Fast Python Exponitial Function for curve_fit: Numpy Express gives slower results
0
Enormous loss of computation speed when using arrays in Cython
0
Using Armadillo with MKL

2947
How to make function decorators and chain them together?
2924
List changes unexpectedly after assignment. Why is this and how can I prevent it?
2343
Why are elementwise additions much faster in separate loops than in a combined loop?
25855
Why is processing a sorted array faster than processing an unsorted array?
879
Why does Python code run faster in a function?
1670
Is < faster than <=?
753
Why is [] faster than list()?
880
Why does C++ code for testing the Collatz conjecture run faster than hand-written assembly?
881
Why is 2 * (i * i) faster than 2 * i * i in Java?
0
numba does not compile a function with numpy arrays