Can somebody please tell me what this code is trying to do?
Especially the last line of assigning 'min' to variable 'p'?

Also, if I change the 2nd line of code to this:

What exactly is happening here?

Expected: a random number from the list 'a'
Actual: I'm seeing the minimum numbers appear in variable 'c' more often than the rest.

a list p will be populated with a different random number from 0 to 100 for each number in your array. So in your example 10 random numbers are generated. The variable is likely named p in this program because it is the "probability distribution" Next the computer will determine the minimum of the generated random numbers, and use as an index to access the original array, to then get a value form your array and use it for the value of c.

When you include the -x in your expression, you are changing the ways the generated numbers are weighted to include information about the value in the original array that corresponds to that number. This will change the probability distribution to be dependent on the values in your original array.

In this case, the numbers that are higher in your original array will be selected more often. I do not understand why you are getting lower numbers more often.

You can use the build in random.choice function in Python.

Expected: a random number from the list 'a' Actual: I'm seeing the minimum numbers appear in variable 'c' more often than the rest

When list p is initialised it is created in a certain order preordained by the python interpreter. Your code is finding the index position that the lowest value created is stored at in the list. It's a characteristic inherent to lists and iteration in python that is inherited from the C code in Python and the assembler code that makes up the C compiler.

What you are doing when you taking the index, is you are measuring the position where the lowest number is located in list stored in memory. Lists more generally in Computer Programming are stored in any order in memory. Unlike arrays, which can't have their size (number of positions that they hold changed) lists don't care about postings. Lists don't ever have to care about what is stored in them, you can create a list of just objects, where objects could be integer, floats, string, and object types. Every time a new list position is created it's just written to the next available section of memory with apart of it identifying its self as a what list and what index. What a list literally looks like in memory is a semi order collection of references. Imagine a hat with Duodecimal call numbers written on peaces on paper inside it. The hat is a list in memory and the call numbers are the data stored in the list. What order the call numbers are in is up to how you take them out or put them in; the function in the Python Interpreter that does this. You can just as easily add call numbers to the hat, but that doesn't effect the function that puts them into and out of memory. There is nothing random about where a number in memory is stored, it is stored there due to a quark of python which can probably be traced by to the assembler code that is in the Python Interpreter

for example if I run you function for 100 generations, then we see clear clustering around certain numbers. 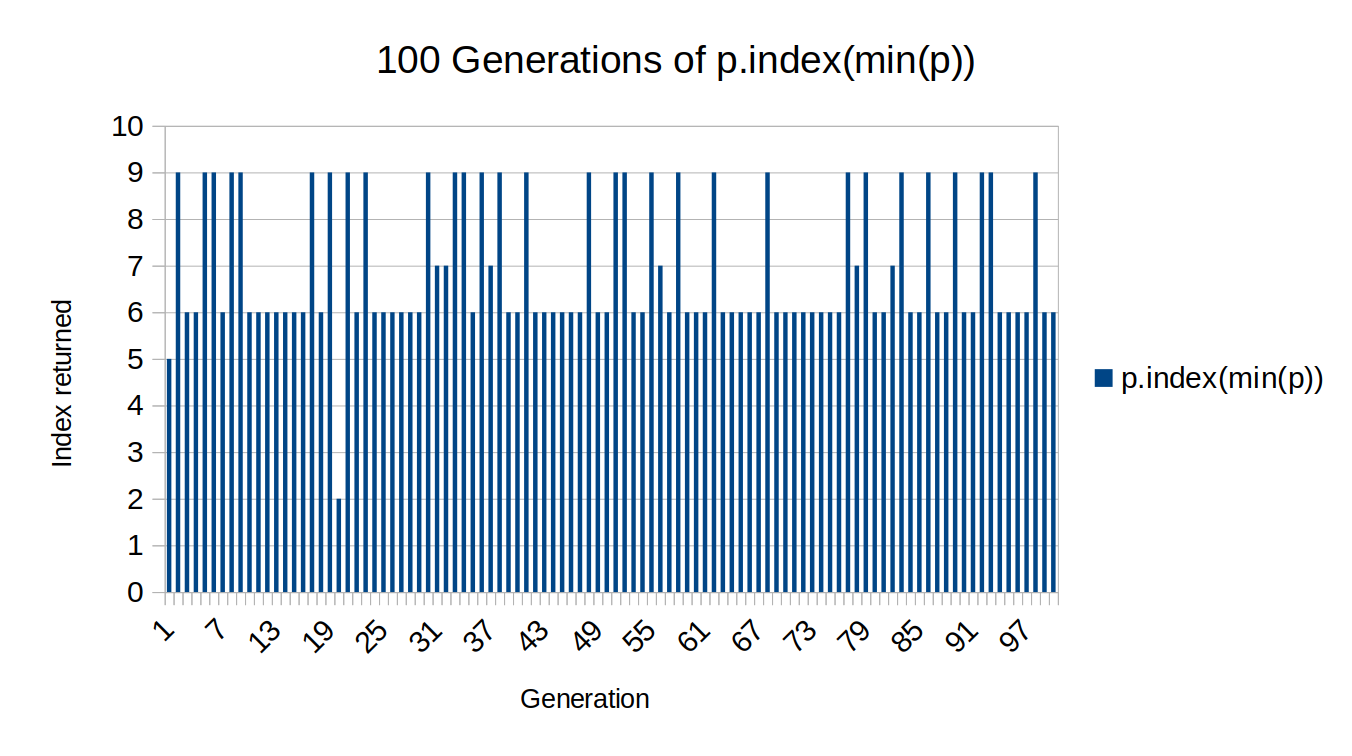 (While this probably isn't the right graph for this; stem & leaf plot would be.) We can clearly see a bias for the number 6 is represented in the data.

The min() function returns the lowest value in a list. The list's order is not rewritten. See more about min

Not the answer you're looking for? Browse other questions tagged python python-3.x or ask your own question.

576
Determine function name from within that function (without using traceback)
1105
“Large data” workflows using pandas
0
How to pick a random number every time something happens
1
How do I remove an element from a list without using .remove
1
How to get minimum odd number using functions from list
2
Pick values from N number of list in nested dictionary
0
“list index out of range” when using random to pick item