I am attempting to put together a simple c++ test project that uses an embedded python 3.2 interpreter. The project builds fine but Py_Initialize raises a fatal error:

The python_d.exe file from the same build runs without any problems.

Could someone explain the problem and how to fix it? My own google-fu fails me.

After going through the python source code I've found that, as the error says, no codec search functions have been registered. Both codec_register and PyCodec_Register are as they should be. It's just that nowhere in the code are any of these functions called.

I don't really know what this means as I still have no idea when and from where these functions should have been called. The code that raises the error is entirely missing from the source of my other python build (3.1.3).

Answered my own question below.

Check the PYTHONPATH and PYTHONHOME environment variables and make sure they don't point to Python 2.x.

Parts of this have been mentioned before, but in a nutshell this is what worked for my environment where I have multiple Python installs and my global OS environment set-up to point to a different install than the one I attempt to work with when encountering the problem.

Make sure your (local or global) environment is fully set-up to point to the install you aim to work with, e.g. you have two (or more) installs of, let's say a python27 and python33 (sorry these are windows paths but the following should be valid for equivalent UNIX-style paths just as well, please let me know about anything I'm missing here (probably the DLLs path might differ)):

Now, if you intend to work with your python33 install but your global environment is pointing to python27, make sure you update your environment as such (while PATH and PYTHONHOME may be optional (e.g. if you temporarily work in a local shell)):

Note, that you might need/want to append any other library paths to your PYTHONPATH if required by your development environment, but having your DLLs, Lib and site-packages properly set-up is of prime importance.

The core reason is quite simple: Python does not find its modules directory, so it can of course not load encodings, too

Python doc on embedding says "Py_Initialize() calculates the module search path based upon its best guess" ... "In particular, it looks for a directory named lib/pythonX.Y"

Yet, if the modules are installed in (just) lib - relative to the python binary - above guess is wrong.

Although docs says that PYTHONHOME and PYTHONPATH are regarded, we observed that this was not the case; their actual presence or content was completely irrelevant.

The only thing that had an effect was a call to Py_SetPath() with e.g. [path-to]\lib as argument before Py_Initialize().

Sure this is only an option for an embedding scenario where one has direct access and control over the code; with a ready-made solution, special steps may be necessary to solve the issue.

Ran into the same thing trying to install brew's python3 under Mac OS! The issue here is that in Mac OS, homebrew puts the "real" python a whole layer deeper than you think. You would think from the homebrew output that

would be correct, but invoking $PYTHONPATH/python3 immediately crashes with the abort 6 "can't find encodings." This is because although that $PYTHONHOME looks like a complete installation, having a bin, lib etc, it is NOT the actual Python, which is in a Mac OS "Framework". Do this:

(substituting version numbers as appropriate) and it will work fine.

I had this issue with python 3.5, anaconda 3, windows 7 32 bit. I solved it by moving my pythonX.lib and pythonX.dll files into my working directory and calling

before initialize so that it could find the headers that it needed, where my path was to "...\Anaconda3\". The extra step of calling Py_SetPythonHome was required for me or else I'd end up getting other strange errors where python import files.

You just have to copy Python's Lib/ directory in your program's working directory ( on VC it's the directory where the .vcproj is )

There appears to be something going wrong with the release build either failing to include the appropriate codecs or else misidentifying the codec to use for system APIs. Since the python_d executable is working, what does that return for os.getfsencoding()? (Use the C API to call that between your Initialize/Finalize calls)

I had the same issue and found this question. However from the answers here I was not able to solve my problem. I started debugging the cpython code and thought that I might be discovered a bug. Therefore I opened a issue on the python issue tracker.

My mistake was that I did not understand that Py_SetPath clears all inferred paths. So one needs to set all paths when calling this function.

For completion I also copied the most important part of the conversation below.

I compiled the source of CPython 3.7.3 myself on Windows with Visual Studio 2017 together with some packages like e.g numpy. When I start the Python Interpreter I am able to import and use numpy. However when I am running the same script via the C-API I get an ModuleNotFoundError.

So the first thing I did, was to check if numpy is in my site-packages directory and indeed there is a folder named numpy-1.16.2-py3.7-win-amd64.egg. (Makes sense because the python interpreter can find numpy)

The next thing I did was to get some information about the sys.path variable created when running the script via the C-API.

Examining the content of sys.path I noticed two things.

The next thing I tried was to use Py_SetPath(L"C:/Work/build/product/Lib/site-packages") before calling Py_Initialize(). This led to

I created a minimal c++ project with exact these two calls and started to debug Cpython.

Create a new zipimporter instance. 'archivepath' must be a path-like object to a zipfile, or to a specific path inside a zipfile. For example, it can be '/tmp/myimport.zip', or '/tmp/myimport.zip/mydirectory', if mydirectory is a valid directory inside the archive. 'ZipImportError' is raised if 'archivepath' doesn't point to a valid Zip archive. The 'archive' attribute of the zipimporter object contains the name of the zipfile targeted.

So for me it seems that the C-API expects the path set with Py_SetPath to be a path to a zipfile. Is this expected behaviour or is it a bug? If it is not a bug is there a way to changes this so that it can also detect directories?

PS: The ModuleNotFoundError did not occur for me when using Python 3.5.2+, which was the version I used in my project before. I also checked if I had set any PYTHONHOME or PYTHONPATH environment variables but I did not see one of them on my system.

This is probably a documentation failure more than anything else. We're in the middle of redesigning initialization though, so it's good timing to contribute this feedback.

The short answer is that you need to make sure Python can find the Lib/encodings directory, typically by putting the standard library in sys.path. Py_SetPath clears all inferred paths, so you need to specify all the places Python should look. (The rules for where Python looks automatically are complicated and vary by platform, which is something I'm keen to fix.)

Paths that don't exist are okay, and that's the zip file. You can choose to put the stdlib into a zip, and it will be found automatically if you name it the default path, but you can also leave it unzipped and reference the directory.

A full walk through on embedding is more than I'm prepared to type on my phone. Hopefully that's enough to get you going for now.

I had the problem and was tinkering with different solutions mentioned here. Since I was running my project from Visual Studio, apparently, I needed to set the environment path inside Visual Studio and not the system path.

Adding a simple PYTHONHOME=PATH\TO\PYTHON\DIR in the project solution\properties\environment solved the problem.

For me this happened when I updated Python 64 bit from 3.6.4 to 3.6.5. It threw some error like "unable to extract python.dll. Do you have permissions."

Pycharm also failed to load interpreter, even though I reloaded it in settings. Running python command gave same error, with and without administrator mode.

There was error in installation of Python, include folder in python installation directory C:\Users\USERNAME\AppData\Local\Programs\Python\Python36 was missing

In my cases, for windows, if you have multiple python versions installed, if PYTHONPATH is pointing to one version the other ones didn't work. I found that if you just remove PYTHONPATH, they all work fine

For those working in Visual Studio simply add the include, Lib and libs directories to the Include Directories and Library Directories under Projects Properties -> Configuration Properties > VC++ Directories :

For example I have Anaconda3 on my system and working with Visual Studio 2015 This is how the settings looks like (note the Include and Library directories) : 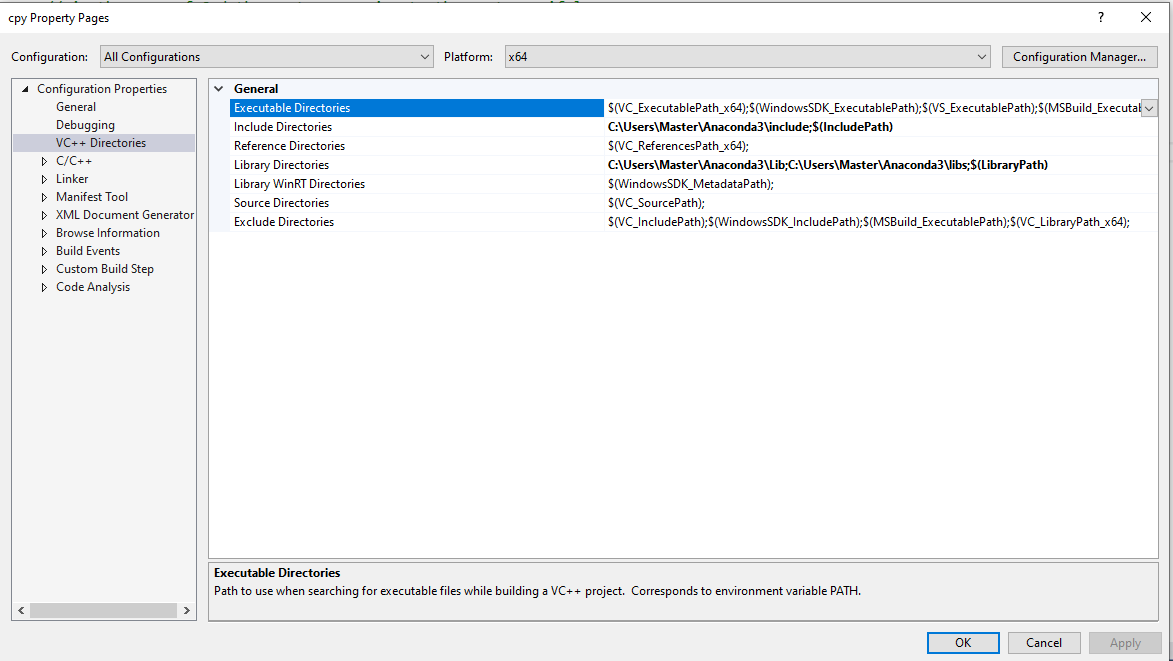 As also pointed out by bossi setting PYTHONPATH in your user Environment Variables section seems necessary. a sample input can be like this (in my case):

is necessary it seems.

Also, you need to restart Visual Studio after you set up the PYTHONPATH in your user Environment Variables for the changes to take effect.

Make sure the PYTHONHOME environment variable is set to the Python interpreter you want to use. The C++ projects in Visual Studio rely on this variable to locate files such as python.h, which are used when creating a Python extension.

So, for some reason the python dll fails to locate the encodings module. The python.exe executable apparently finds it because it has the expected relative path. Modifying the search path works.

The reason for all of this? Don't know but at least it works. I highly suspect a typo on my part somewhere, that's usually the reason for odd bugs it seems.

Not the answer you're looking for? Browse other questions tagged c++ python or ask your own question.

2080
Why can templates only be implemented in the header file?
833
How can I use Python to get the system hostname?
1491
How can I install packages using pip according to the requirements.txt file from a local directory?
1121
Extract file name from path, no matter what the os/path format
0
No modules named 'encodings' if python 3 directory is moved after building from source code
3
Undefined reference to Py_Initialize()