Explanation of “Lose your head” in lazy sequences

In Clojure programming language, why this code passes with flying colors?

While this one fails:

I know it is about "Losing your head" advice but would you please explain it to me? I'm not able to digest it yet.

UPDATE:
It is really hard to pick the correct answer, two answers are amazingly informative.
Note: Code snippets are from "The Joy of Clojure".

In the case of (let [r (range 1e9)] [(last r) (first r)]), it generates a billion elements in order to be able to evaluate (last r), but it also has to hold on to the beginning of the list it's generating in order to later evaluate (first r). So it's not able to throw anything away as it goes, and (I presume) runs out of memory.

To elaborate on dfan and Rafał's answers, I've taken the time to run both expressions with the YourKit profiler.

It's fascinating to see the JVM at work. The first program is so GC-friendly that the JVM really shines at managing its memory.

I drew some charts.

This program runs very low on memory; overall, less than 6 megabytes. As stated earlier, it is very GC friendly, it makes a lot of collections, but uses very little CPU for that.

This one is very memory hungry. It goes up to 300 MB of RAM, but that's not enough and the program does not finish (the JVM dies less than one minute later). The GC takes up to 90% of CPU time, which indicates it desperately tries to free any memory it can, but cannot find any (the objects collected are very little to none).

Edit The second program ran out of memory, which triggered a heap dump. An analysis of this dump shows that 70% of the memory is java.lang.Integer objects, which could not be collected. Here's another screenshot: 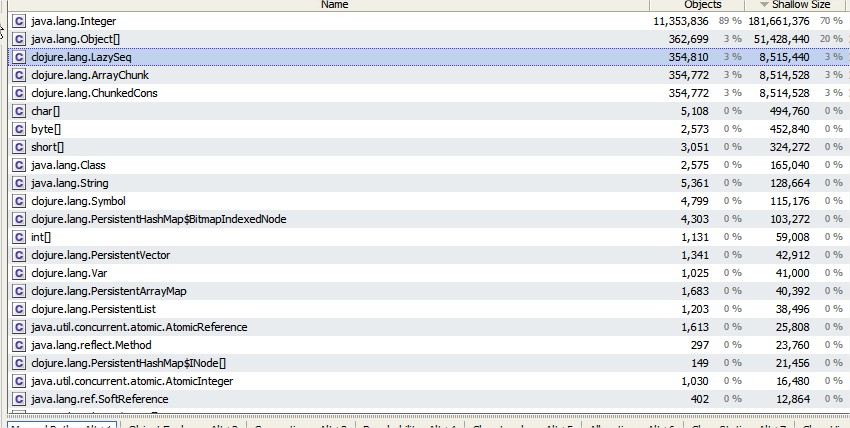 What really holds the head here is the binding of the sequence to r (not the already-evaluated (first r), since you cannot evaluate the whole sequence from its value.)

In the first case the binding no longer exists when (last r) is evaluated, since there are no more expressions with r to evaluate. In the second case, the existence of the not-yet-evaluated (first r) means that the evaluator needs to keep the binding to r.

To show the difference, this evaluates OK:

Even though the expression following (last r) ignores r, the evaluator is not that smart and keeps the binding to r, thus keeping the whole sequence.

Edit: I have found a post where Rich Hickey explains the details of the mechanism responsible for clearing the reference to the head in the above cases. Here it is: Rich Hickey on locals clearing

for a technical description, go to http://clojure.org/lazy. the advice is mentioned in the section Don't hang (onto) your head

Not the answer you're looking for? Browse other questions tagged functional-programming clojure lazy-evaluation jvm-languages or ask your own question.