My implementation of the Wave Collapse Function algorithm in Python 2.7 is flawed but I'm unable to identify where the problem is located. I would need help to find out what I'm possibly missing or doing wrong.

What is the Wave Collapse Function algorithm ?

It is an algorithm written in 2016 by Maxim Gumin that can generate procedural patterns from a sample image. You can see it in action here (2D overlapping model) and here (3D tile model).

Goal of this implementation:

To boil down the algorithm (2D overlapping model) to its essence and avoid the redondancies and clumsiness of the original C# script (surprisingly long and difficult to read). This is an attempt to make a shorter, clearer and pythonic version of this algorithm.

Characteristics of this implementation:

I'm using Processing (Python mode), a software for visual design that makes image manipulation easier (no PIL, no Matplotlib, ...). The main drawbacks are that I'm limited to Python 2.7 and can NOT import numpy.

Unlike the original version, this implementation:

The Algorithm (as I understand it)

1/ Read the input bitmap, store every NxN patterns and count their occurences. (optional: Augment pattern data with rotations and reflections.)

2/ Precompute and store every possible adjacency relations between patterns. In the example below, patterns 207, 242, 182 and 125 can overlap the right side of pattern 246 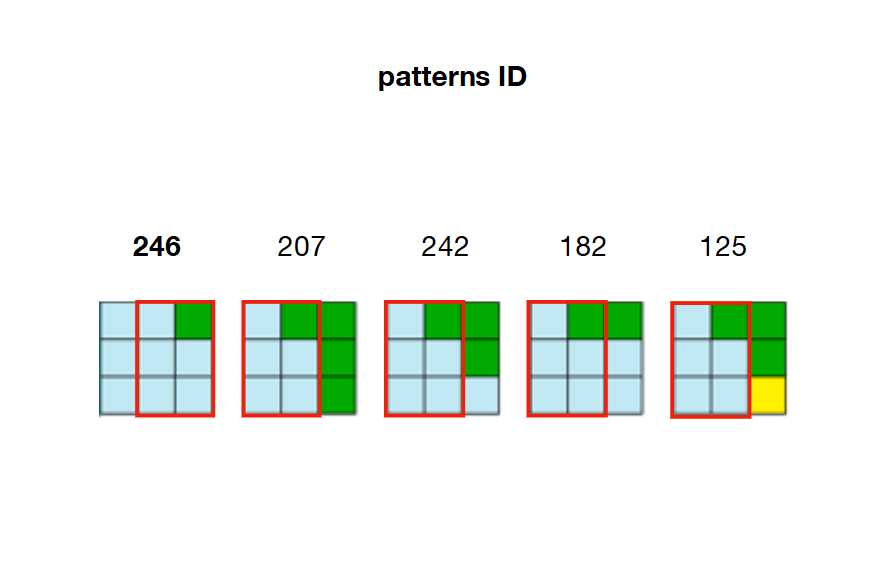 3/ Create an array with the dimensions of the output (called W for wave). Each element of this array is an array holding the state (True of False) of each pattern.

At start, all booleans are set to True because every pattern is allowed at any position of the Wave.

4/ Create another array with the dimensions of the output (called H). Each element of this array is a float holding the "entropy" value of its corresponding cell in output.

Entropy here refers to Shannon Entropy and is computed based on the number of valid patterns at a specific location in the Wave. The more a cell has valid patterns (set to True in the Wave), the higher its entropy is.

For example, to compute the entropy of cell 22 we look at its corresponding index in the wave (W[22]) and count the number of booleans set to True. With that count we can now compute the entropy with the Shannon formula. The result of this calculation will be then stored in H at the same index H[22]

At start, all cells have the same entropy value (same float at every position in H) since all patterns are set to True, for each cell.

These 4 steps are introductory steps, they are necessary to initalize the algorithm. Now starts the core of the algorithm:

Find the index of the cell with the minimum nonzero entropy (Note that at the very first iteration all entropies are equal so we need to pick the index of a cell randomly.)

Then, look at the still valid patterns at the corresponding index in the Wave and select one of them randomly, weighted by the frequency that pattern appears in the input image (weighted choice).

For example if the lowest value in H is at index 22 (H[22]), we look at all the patterns set to True at W[22] and pick one randomly based on the number of times it appears in the input. (Remember at step 1 we've counted the number of occurences for each pattern). This insures that patterns appear with a similar distribution in the output as are found in the input.

We now assign the index of the selected pattern to the cell with the minimum entropy. Meaning that every pattern at the corresponding location in the Wave are set to False except for the one that has been chosen.

For example if pattern 246 in W[22] was set to True and has been selected, then all other patterns are set to False. Cell 22 is assigned pattern 246. In output cell 22 will be filled with the first color (top left corner) of pattern 246. (blue in this example)

Because of adjacency constraints, that pattern selection has consequences on the neighboring cells in the Wave. The arrays of booleans corresponding to the cells on the left and right, on top of and above the recently collapsed cell need to be updated accordingly.

For example, looking back at the picture of step 2, we can see that only patterns 207, 242, 182 and 125 can be placed on the right of pattern 246. That means that W[23] (right of cell 22) needs to keep patterns 207, 242, 182 and 125 as True and set all other patterns in the array as False. If these patterns are not valid anymore (already set to False because of a previous constraint) then the algorithm is facing a contradiction.

Because a cell has been collapsed (one pattern selected, set to True) and its surrounding cells updated accordingly (setting non adjacent patterns to False) the entropy of all these cells have changed and needs to be computed again. (Remember that the entropy of a cell is correlated to the number of valid pattern it holds in the Wave.)

By now the algorithm arrives at the end of the first iteration and will loop over steps 5 (find cell with minimum non zero entropy) to 8 (update entropies) until all cells are collapsed.

You'll need Processing with Python mode installed to run this script. It contains around 80 lines of code (short compared to the ~1000 lines of the original script) that are fully annotated so it can be rapidly understood. You'll also need to download the input image and change the path on line 16 accordingly.

Despite all my efforts to carefully put into code all the steps described above, this implementation returns very odd and disappointing results: 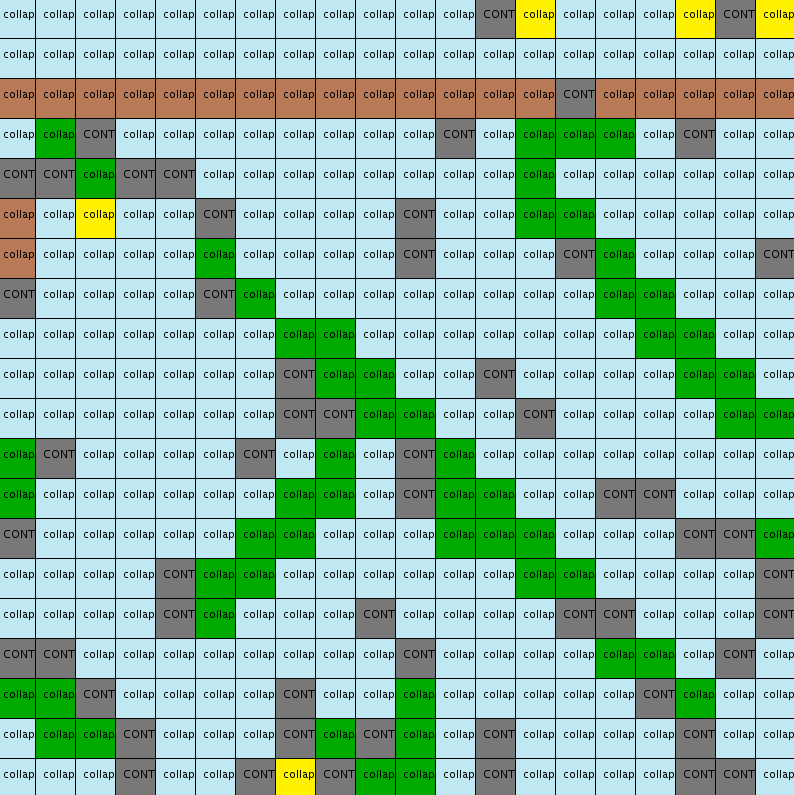 Both the pattern distribution and the adjacency constraints seem to be respected (same amount of blue, green, yellow and brown colors as in input and same kind of patterns: horizontal ground , green stems).

On that last point, I should clarify that contradictory states are normal but should happen very rarely (as stated in the middle of page 6 of this paper and in this article)

Hours of debugging convinced me that introductory steps (1 to 5) are correct (counting and storing patterns, adjacency and entropy computations, arrays initialization). This has led me to think that something must be off with the core part of the algorithm (steps 6 to 8). Either I am implementing one of these steps incorrectly or I am missing a key element of the logic.

Any help regarding that matter would thus be immensely appreciated !

Also, any answer that is based on the script provided (using Processing or not) is welcomed.

This detailed article from Stephen Sherratt and this explanatory paper from Karth & Smith. Also, for comparison I would suggest to check this other Python implementation (contains a backtracking mechanism that isn't mandatory) .

Note: I did my best to make this question as clear as possible (comprehensive explanation with GIFs and illustrations, fully annotated code with useful links and ressources) but if for some reasons you decide to vote it down, please leave a brief comment to explain why you're doing so.

The hypothesis suggested by @mbrig and @Leon that the propagation step iterates over a whole stack of cells (instead of being limited to a set of 4 direct neighbors) was correct. The following is an attempt to provide further details while answering my own questions.

The problem occured at step 7, while propagating. The original algorithm does update the 4 direct neighbors of a specific cell BUT:

Once a cell is collapsed, its index is put in a stack. That stack is meant later to temporarily store indices of neighoring cells

The propagation will last as long as that stack is filled with indices:

First thing we do is pop() the last index contained in the stack (the only one for now) and get the indices of its 4 neighboring cells (E, W, N, S). We have to keep them withing bounds and make sure they wrap around.

Before going any further, we make sure the neighboring cell is not collapsed yet (we don't want to update a cell that has only 1 pattern available):

We also look at the patterns that are available in the neighboring cell:

Now we make sure that the neighboring cell really have to be updated. If all its available patterns are already in the list of all the possible patterns —> there’s no need to update it (the algorithm skip this neighbor and goes on to the next) :

However, if it is not a subset of the possible list —> we look at the intersection of the two sets (all the patterns that can be placed at that location and that, "luckily", are available at that same location):

If they don't intersect (patterns that could have been placed there but are not available) it means we ran into a "contradiction". We have to stop the whole WFC algorithm.

If, on the contrary, they do intersect --> we update the neighboring cell with that refined list of pattern's indices:

Because that neighboring cell has been updated, its entropy must be updated as well:

Finally, and most importantly, we add the index of that neighboring cell to the stack so it becomes the next current cell in turns (the one whose neighbors will be updated during the next while loop):

In addition to these fixes I also did some minor code optimization to speed-up both the observation and propagation steps, and shorten the weighted choice computation.

While looking at the live demo linked in one of your examples, and based on a quick review of the original algorithm code, I believe your error lies in the "Propagation" step.

The propagation is not just updating the neighbouring 4 cells to the collapsed cell. You must also update all of those cells neighbours, and then the neighbours to those cells, etc, recursively. Well, to be specific, as soon as you update a single neighbouring cell, you then update its neighbour (before getting to the other neighbours of the first cell), i.e. depth-first, not breadth-first updates. At least, that's what I gather from the live demo.

The actual C# code implementation of the original algorithm is quite complicated and I don't fully understand it, but the key points appear to be creation of the "propagator" object here, as well as the Propagate function itself, here.

Not the answer you're looking for? Browse other questions tagged python algorithm markov-chains procedural-generation or ask your own question.

1513
What's the canonical way to check for type in Python?
1557
What is the best algorithm for overriding GetHashCode?
3352
How to get the current time in Python
1281
How to get the filename without the extension from a path in Python?
1174
Why do people write #!/usr/bin/env python on the first line of a Python script?
1330
Referring to the null object in Python
1209
Easy interview question got harder: given numbers 1..100, find the missing number(s) given exactly k are missing
945
Peak detection in a 2D array
1442
What is the Python 3 equivalent of "python -m SimpleHTTPServer"
1984
What is the optimal algorithm for the game 2048?