I'm new to mercurial and I'm trying to do something really simple but can't figure out how to. I created a branch to do some experimentation without disturbing the main branch.

However, since nothing was changed in the 'trunk' branch, the merge says that there is nothing to merge, which is fair enough. I just need to end up one branch called 'trunk'. How can I do that?

For instance, in your case, you would do:

Choosing the right branch to update to

There are some things to consider when picking which branch to update to, and which to merge from, and it has to do with bookmarks and branch names.

As for bookmarks, with newer versions of Mercurial, bookmarks are an integral part, and if you update to a bookmark, say like this:

and then commit, that bookmark will follow your commit, ie. it will move forward.

In line of this, if you have a bookmark called moving-target on the head of the trunk branch, and update to that bookmark, the merge changeset, when you commit it, will move that bookmark forward.

Once you've created a branch, you can't exactly achieve a single default branch (with some exceptions, see below). However, you should be able to merge experiment into default and achieve the same thing.

If you start with this: 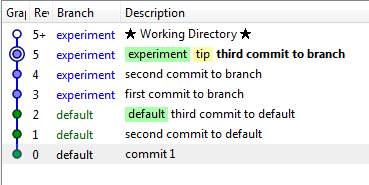 you should end up with this: 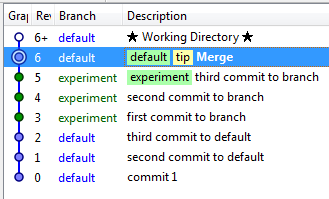 Using rebase or a patch queue you could actually relocate the changesets on the experiment branch back on to default. This would basically remove the experiment named branch and create a few more default changesets. You cannot do this, however, if you've already shared the changesets form the first image, above, with another user.

6622
How do I merge two dictionaries in a single expression?
3105
I ran into a merge conflict. How do I abort the merge?
854
Git for beginners: The definitive practical guide
1032
Git workflow and rebase vs merge questions
2235
When do you use Git rebase instead of Git merge?
1248
How to list branches that contain a given commit?
2104
How do you merge two Git repositories?
1872
How to merge two arrays in JavaScript and de-duplicate items
1873
How can I get a list of Git branches, ordered by most recent commit?
2480
How do I delete all Git branches which have been merged?