How to clear textboxes nested inside a tabControl, tabPage and 2 panels?

The picture below represents a plugIn I am building. 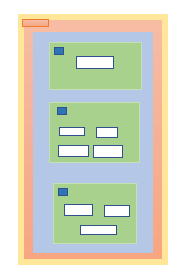 I am trying to clear any text from the text boxes if they have text in them and clear the checkboxes if they are checked with a button click.

I researched online and tried to accomplish this by the following way but it doesn't seem to be the correct way to handle this problem.

I have only shown panel1 here but tried doing the same thing for panel 2 and 3 as well.

What exactly am I doing wrong here? Any help would be greatly appreciated!

If you want to clear the TextBoxes and ComboBoxes inside of panel1 then you only need to loop through panel1's controls to do it. To handle any panel, you could just write a ClearPanel(Panel) function.

Iterating through the controls in tabControl1, tabPage1, etc, etc adds unnecessary overhead if you already have a reference to the Panel you're dealing with. What's more, if any of the controls in the outer loops have an empty Controls collection then the inner loops won't execute. I suspect this might be why your code isn't working.

Note that the above solution will not handle any TextBox or ComboBox that is inside another container inside panel1. So, if panel1 had a GroupBox inside it which contained TextBoxes or ComboBoxes, they wouldn't be cleared. See the recursive solution below to handle that situation.

EDIT: After re-reading your question I thought maybe you want to clear all TextBox and CheckBox controls on the Form.

If you're needing to clear every TextBox or CheckBox on the Form, you can do this with recursion.

You just need a simple recursive method that iterates all controls inside all child containers of a specified parent container, mainPanel, here.
If a control is of type TextBox or CheckBox, set its Text or Checked property accordingly:

(Note that you can also pass tabPage1 to the method, or any other ancestor)

Not the answer you're looking for? Browse other questions tagged c# winforms checkbox textbox or ask your own question.

593
How do I make a textbox that only accepts numbers?
344
How do I get a TextBox to only accept numeric input in WPF?
73
Activate tabpage of TabControl
2
asp.net Update Panel inside a user control not working
0
How to clear a textbox based on a checkbox using Javascript
2
change textbox value by previous checkbox
0
Clearing textbox controls within splitter container