After compilation, the vtable I get with g++ -fdump-class-hierarchy is:

I failed to understand what do the entries like (int ()(...))0* correspond to. Of course it means something like, it is a function which returns an int and takes unlimited number of arguments, I don't understand anything further. To which function does this function pointer correspond to? and how do you know that? Mine is a 64 bit machine.

The second function pointer has an address associated at end?? To whom does that correspond to?

Those are the offset-to-top (needed for multiple inheritence) and typeinfo (RTTI) pointers.

From the Itanium ABI (you are not using the Itanium compiler, but their description of this is really good):

The typeinfo pointer points to the typeinfo object used for RTTI. It is always present. All entries in each of the virtual tables for a given class must point to the same typeinfo object. A correct implementation of typeinfo equality is to check pointer equality, except for pointers (directly or indirectly) to incomplete types. The typeinfo pointer is a valid pointer for polymorphic classes, i.e. those with virtual functions, and is zero for non-polymorphic classes.

Offset-to-top in more detail (by request)

Let's say you have a derived class D that derives from a base class, B1. What happens when you try to cast a D instance to type B1? Since functions that take a B1 object don't know anything about D, part of the D vtable must also be a valid B1 vtable. This is easy enough - just make the start of the D vtable look like a B1 vtable, and add on any additional entries we need after that. Functions expecting a B1 will be happy, because they won't use any part of the vtable beyond what they're expecting for a B1.

However, what happens if D now also derives from B2? The pointer to the D vtable can't be both a valid B1 vtable and a valid B2 vtable! The compiler solves this by appending a separate B2 vtable to the end of our combined D/B1 vtable, and adjusts the vtable-pointer manually when we try to cast from a D to a B2.

However, this leads to a new problem - what happens when we try to cast back from a B2 to a D? The compiler can't just adjust the vtable-pointer backwards by the same amount it adjusted the pointer previously, because it doesn't actually know for sure that the B2 object we're giving it is of type D! In particular, dynamic_cast<D>() must be able to tell if our object is or isn't of type D. For that, it needs to access the object's RTTI, and for that, it needs to know where the start of the original object's vtable is. This is the purpose of the offset-to-top value - it gives us the offset to the start of the original object's vtable, we get our object's RTTI, and the vengeful god of C++ allows our crops to grow for another season.

This page has some good examples of vtable layouts (under Table 1c). Note that they are slightly more complicated due to the use of virtual inheritance, which adds an extra offset to the vtable of each child class.

Maybe the first entry is for a virtual destructor and the second one is for RTTI support? But that's only a guess.

I believe the answers quoting the Itanium ABI are too cumbersome to understand.

I think this paper by Ruhr-Universität Bochum and others (https://www.syssec.ruhr-uni-bochum.de/media/emma/veroeffentlichungen/2019/10/02/ACSAC19-VPS.pdf) describes RTTI and Offset-To-Top in a friendlier way.

Extracted from the paper itself: 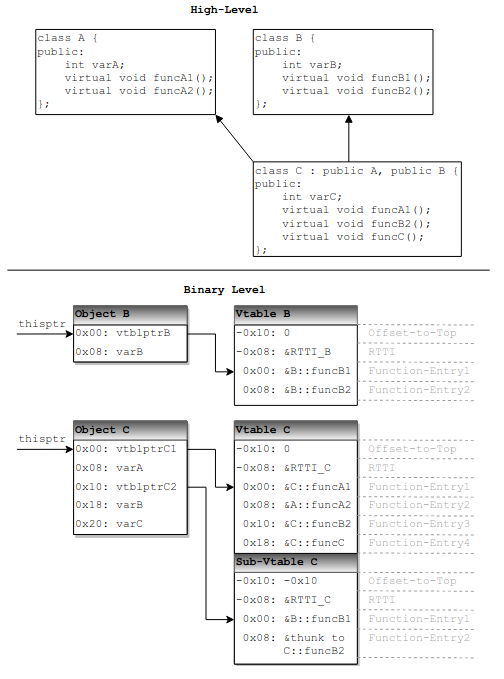 RTTI holds a pointer to type information about the class. Among other things, this type information contains the name of the class and its base classes. However, RTTI is optional and often omitted by the compiler. It is only needed when the programmer uses, e.g.,dynamic_cast or type_info. Hence, a reliable static analysis cannot rely on this information. Classes that do not contain RTTI have the RTTI field set to zero.

Not the answer you're looking for? Browse other questions tagged c++ gcc virtual-functions vtable or ask your own question.

9
Explanation of virtual table
2
What are those two long in vtable assembly code emitted by GCC?
0
What is this value in a vtable output from Clang?
50
How to determine if an object is an instance of certain derived C++ class from a pointer to a base class in GDB?
41
How is dynamic_cast implemented
5
what does “<vtable for A+16>” mean?
4
First address of a vtable in GCC?
0
Multiple Vtables ad VPointers in C++
1
understanding c++ vtables and RTTI

1502
What is the difference between const int*, const int * const, and int const *?
1
DSO's dynamic symbol table has more entries under 64-bit GCC than 32-bit GCC
3
Incorrect stack trace with GCC + precompiled header
2
How to install a specific version of gcc
3
How to tell ld where to find libc
0
Can't get large file support for stat on CentOS 6
0
Compiler test fails, gcc on redhat
1
GLIBCXX_3.4.26 not found running cross-complied program on BeagleBone