As of (at least) Windows 10, version 1903, you have the option to set the system locale (language for non-Unicode programs) to UTF-8, but the feature is still in beta as of this writing. 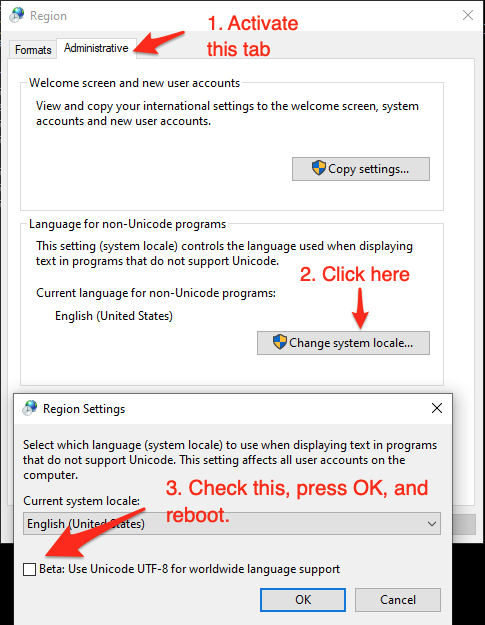 [1] In PowerShell, if you never call external programs, you needn't worry about the system locale (active code pages): PowerShell-native commands and .NET calls always communicate via UTF-16 strings (native .NET strings) and on file I/O apply default encodings that are independent of the system locale. Similarly, because the Unicode versions of the Windows API functions are used to print to and read from the console, non-ASCII characters always print correctly (within the rendering limitations of the console).
In cmd.exe, by contrast, the system locale matters for file I/O (with < and > redirections, but notably including what encoding to assume for batch-file source code), not just for communicating with external programs in-memory (such as when reading program output in a for /f loop).

Even in the EDIT2 situations, some unicode characters cannot be pasted, like ⇆ (U+21C6), or unicode spaces. Only PS7 in Osx would work.

0
Special character and encoding handling while running azure CLI commands in PowerShell
346
How to use unicode characters in Windows command line?
242
How do I capture the output into a variable from an external process in PowerShell?
180
UnicodeEncodeError: 'charmap' codec can't encode - character maps to <undefined>, print function
73
Displaying Unicode in Powershell
35
What does "Beta: Use Unicode UTF-8 for worldwide language support" actually do?
10
Different behaviour and output when piping in CMD and PowerShell
9
How do I call the PowerShell CLI robustly, with respect to character encoding, input and output streams, quoting and escaping?
5
How do I recover this VBA Project? Excel Error message: "Removed Part: /xl/vbaProject.bin part."
7
How can I redirect input in PowerShell without a BOM?
See more linked questions