How to resolve: 'keyWindow' was deprecated in iOS 13.0

I'm using Core Data with Cloud Kit, and have therefore to check the iCloud user status during application startup. In case of problems I want to issue a dialog to the user, and I do it using UIApplication.shared.keyWindow?.rootViewController?.present(...) up to now.

In Xcode 11 beta 4, there is now a new deprecation message, telling me:

'keyWindow' was deprecated in iOS 13.0: Should not be used for applications that support multiple scenes as it returns a key window across all connected scenes

How shall I present the dialog instead?

This is my solution:

Edit The suggestion I make here is deprecated in iOS 15. So now what? Well, if an app doesn't have multiple windows of its own, I presume the accepted modern way would be to get the first of the app's connectedScenes, coerce to a UIWindowScene, and take its first window. But that is almost exactly what the accepted answer does! So my workaround feels rather feeble at this point. However, I'll let it stand for historical reasons.

The accepted answer, while ingenious, might be overly elaborate. You can get exactly the same result much more simply:

I would also caution that the deprecation of keyWindow should not be taken overly seriously. The full warning message reads:

'keyWindow' was deprecated in iOS 13.0: Should not be used for applications that support multiple scenes as it returns a key window across all connected scenes

So if you are not supporting multiple windows on iPad there is no objection to going ahead and continuing to use keyWindow.

Improving slightly on matt's excellent answer, this is even simpler, shorter, and more elegant:

Here is a backward-compatible way of detecting keyWindow:

view.window is current window for scenes 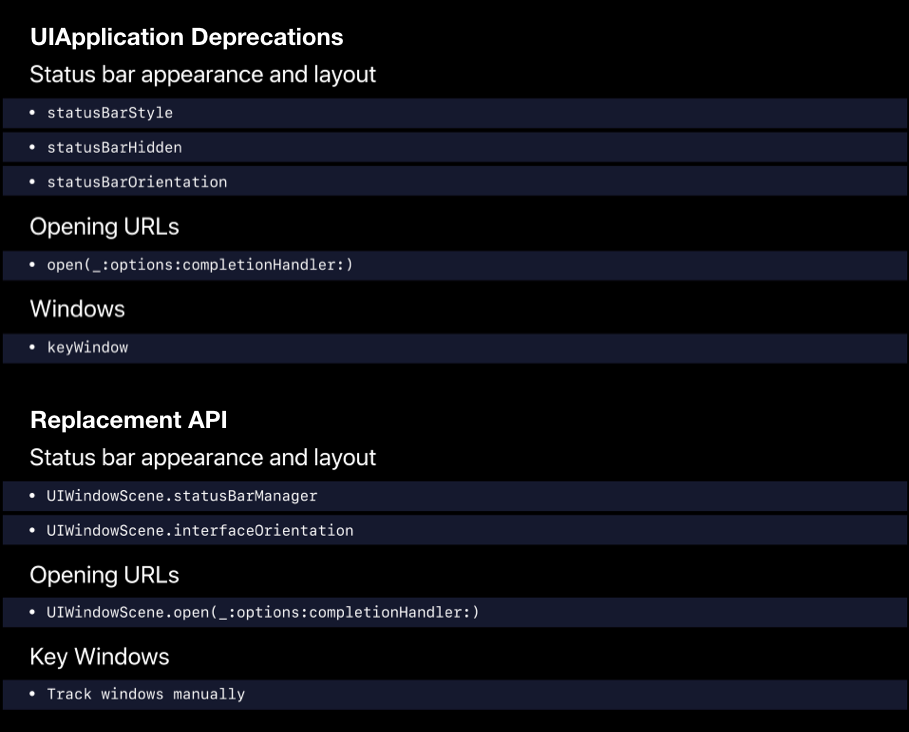 For an Objective-C solution

Ideally, since it has been deprecated I would advice you to store the window in the SceneDelegate. However if you do want a temporary workaround, you can create a filter and retrieve the keyWindow just like this.

If you want to use it in any ViewController then you can simply use.

For an Objective-C solution too

As many of developers asking for Objective C code of this deprecation's replacement. You can use this below code to use the keyWindow.

I created and added this method in the AppDelegate class as a class method and use it with very simple way that is below.

Don't forget to add this method in AppDelegate.h class like below.

Berni's code is nice but it doesn't work when the app comes back from background.

I met the same problem. I alloced a newWindow for a view, and set it [newWindow makeKeyAndVisible]; When finished using it, set it [newWindow resignKeyWindow]; and then try to show the original key-window directly by [UIApplication sharedApplication].keyWindow.

Everything is all right on iOS 12, but on iOS 13 the original key-window can't been normal shown. It shows a whole white screen.

I solved this problem by:

Inspired by the answer of berni

Not the answer you're looking for? Browse other questions tagged swift ios13 uiwindow uiscene or ask your own question.

-2
'keyWindow' is deprecated: first deprecated in iOS 13.0 in Objective-C
0
How to solve 'keyWindow' was depreciated in iOS 13 (AutoLayout)
221
Get top most UIViewController
76
How to change the status bar background color and text color on iOS 13?
39
Prevent dismissal of modal view controller in SwiftUI
33
iOS: Detect if the device is iPhone X family (frameless)
21
How to speed up UI test cases in Xcode?
6
Get UIWindow without using AppDelegate
5
How to detect all touches in Swift 2
6
Insert a floating action button on UITableView in Swift
See more linked questions