Is there a vr (vertical rule) in html?

I know there is a hr (horizontal rule) in html, but I don't believe there is a vr (vertical rule). Am I wrong and if not, why isn't there a vertical rule?

No, there is no vertical rule.

EDIT: It's 2021 (twelve years after I answered this question), and I no longer think my original explanation is true:

I'm not sure why a VR tag was never introduced, but it's likely not because of the way HTML is parsed - there are many different layout modes in HTML/CSS now that do not follow this "paradigm".

If I were to now speculate as to why there is no VR tag, I might look at MDN's definition of the HR tag as a clue:

The HTML <hr> element represents a thematic break between paragraph-level elements: for example, a change of scene in a story, or a shift of topic within a section.

In practice, however, the <hr> tag often ends up used for things other than it's semantic meaning. Although it may seem based on it's real world use that there should be a <vr> tag, it probably would not resemble anything related to the semantic definition of the <hr> tag. It was probably never thought to be introduced.

My hunch is that the creators would suggest that the domain of the solution for this problem lies in CSS, not HTML (and most of the answers to this SO question reflect that).

Nixinova's solution looks like the most elegant and modern solution to this problem.

(The rest of my old answer follows below):

This is easy to do using CSS, however. Ex:

Note that you need to specify a height or fill the container with content.

You can make a vertical rule like this: <hr style="width: 1px; height: 20px; display: inline-block;">

As pointed out by others, the concept of a vertical rule does not fit in with the original ideas behind the structure and presentation of HTML documents. However, these days (especially with the proliferation of web-apps) there are is a small number of scenarios where this would indeed be useful.

For example, consider a horizontal navigation menu fixed at the top of the screen, similar to the menu-bar in most windowed GUI applications. You have several top-level menu items arranged from left-to-right which when clicked open up drop-down menus. Years ago, it was common practice to create this with a single-row table, but this is bad HTML and it is widely recognised that the correct way to go would be a list with heavily customised CSS.

Now, say you want to group similar items, but add a vertical separator in between groups, to achieve something like this:

Using <hr style="width: 1px; height: 100%; ..." /> works, but may be considered semantically incorrect as you are changing what that element is actually for. Furthermore, you can't use this within certain elements where the HTML DTD allows only inline-level elements (e.g. within a <span> element).

This has the added advantage of being compatible with text-only browsers (like lynx) as the pipe character is displayed instead of the image. (It still annoys me that M$IE incorrectly uses alt text as a tooltip; that's what the title attribute is for!)

An <hr> inside a display:flex will make it display vertically.

We will need vertical rule for this.

There isn't, where would it go?

Use CSS to put a border-right on an element if you want something like that.

You can set height and width on "div", like the scope for "hr".

The margin of "hr" is used to alignment.

I know I am adding my answer very late, but it would be worth I am sure. You can achieve vertical line using flex and hr

HTML has little to no vertical positioning due to typographic nature of content layout. Vertical Rule just doesn't fit its semantics.

Try it and you will know yourself:

Ancient question but I solved this with display:flex; and it works great:

In the context of a list item being used as navigation a <vr /> tag would be perfectly useful. The reason it does not exist is because "It does not make logical sense to have one" in the context of HTML a decade ago.

For use in HTML email for most desktop clients you have to use tables. In this case, you can use <hr> tag, with necessary (but simple) inline styling, like:

Of course that styling with CSS is more flexible, but GMail and similar don't allow using of any CSS styling other than inline...

You can use css for simulate a vertical line, and use the class on the div

You can very easily do this by

Be careful about the height and width of hr
Share
Improve this answer
answered Jan 3 '18 at 10:34 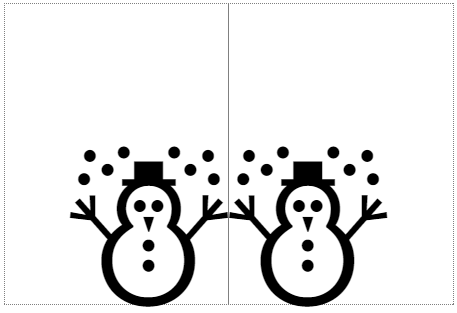 *The - is mandatory in all custom elements.

*You might need to fiddle a bit with display:inline-block|inline because inline won't expand to containing element's height. Use the margin to center the line within a container.

Don't want to mess with javascript?

Simply apply this CSS class to your designated element.

link to original answer on SO.

You could create a custom tag as such:

(If anyone knows a way that I could turn this into an "open-ended" tag, like <hr> let me know and I will edit it in)

You could use the new HTML5 SVG tag:

I find it easy to make an image of a line, and then insert it into the code as a "rule", setting the width and/or height as needed. These have all been horizontal-rule images, but there's nothing stopping me (or you) from using a "vertical-rule" image.

This is cool for many reasons; you can use different lines, colors, or patterns easily as "rules", and since they would have no text, even if you had done it the "normal" way using hr in HTML, it shouldn't impact SEO or other stuff like that. And the image file would/should be very tiny (1 or 2KB at most).

Too many overly-complicated answers. Just make a TableData tag that spans how many rows you want it to using rowspan. Then use the right-border for the actual bar.

Ensure that the "&nbsp" in the second line runs the same amount of lines as the first. so that there's proper spacing between both.

This technique has served me rather well with my time in HTML5.

Today is possible with CSS3

For people who're trying to make columns for text, there's a column-rule property which you should consider using!

Easily can be done using a div like this

Why? Probably because a table with two columns will do.

No there is not. And I will tell you a little story on why it is not. But first, quick solutions:

b) Make a use of a one-side-only border and possibly CSS :first-child selector if you want to apply a general dividers among sibling/neigbour elements.

The story about <vr> FITTING in the original paradigm,
but still not being there:

Many answers here suggest, that vertical divider does not fit the original HTML paradigm/approach ... that is completely wrong. Also the answers contradict themselves a lot.

Those same people are probably calling their clear CSS class "clearfix" - there is nothing to fix about floating, you are just clearing it ... There was even an element in HTML3: <clear>. Sadly, this and clearance of floating is one of the few common misconceptions.

Anyway. "Back then" in the "original HTML ages", there was no thought about something like inline-block, there were just blocks, inlines and tables.

The last one is actually the reason why <vr> does not exist.
Back then it was assumed that:
If you want to verticaly divide something and/or make more blocks from left to right =>
=> you are making/want to make columns =>
=> that implies you are creating a table =>
=> tables have natural borders between their cells => no reason to make a <vr>

This approach is actually still valid, but as time showed, the syntax made for tables is not suitable for every case as well as it's default styles.

Another, probably later, assumption was that if you are not creating table, you are probably floating block elements. That meaning they are sticking together, and again, you can set a border, and those days probably even use the :first-child selector I suggested above...
Share
Improve this answer
answered Sep 2 '16 at 20:56

Not the answer you're looking for? Browse other questions tagged html or ask your own question.

0
hr elements vertically between buttons?
362
How to make a vertical line in HTML
19
Vertical rule (as opposed to <hr>) in CSS
2
How to add this vertical divider in navbar?
0
Why can't I center this image within the div?
0
How to place a vertical hr line beside two images in html

2132
What are valid values for the id attribute in HTML?
1660
Where should I put <script> tags in HTML markup?
1788
RegEx match open tags except XHTML self-contained tags
2207
HTML 5: Is it <br>, <br/>, or <br />?
2763
Storing Objects in HTML5 localStorage
282
Hide html horizontal but not vertical scrollbar
2250
How to create an HTML button that acts like a link
1166
How do I remove the space between inline/inline-block elements?
8160
Why does HTML think “chucknorris” is a color?