I created a local branch and committed changed to it, but later a remote branch was created for me which I did a git fetch to obtain access to locally.

How do I now move everything including untracked files over to the remote branch that was created?

I don't want to lose any of my work, basically I want it so it's as if this new remote branch that was created is where I did my work all along, as I plan to delete the local branch I originally created.

This can be confusing, so let me illustrate.

I created a local branch called ENGA-2604, but this branch will not be used now. Instead, this one will be used remotes/origin/feature/ENGA-2603.

So origin/feature/ENGA-2603 is what was created for me and so my work has to be in that branch because of the network tree it follows has to be the same as you can see below: 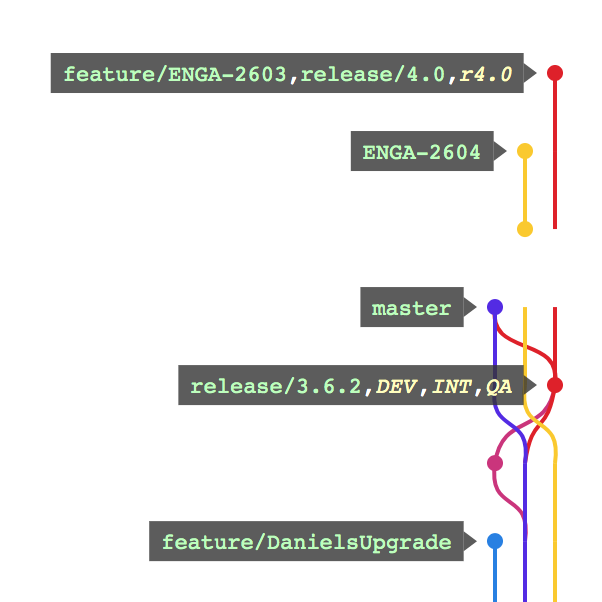 So thatENGA-2604 with the yellow track lines is what I created and that one has to go away, it's on the wrong track. As a result, feature/ENGA-2603 was created for me, the one on the red track line. So all my work has to be in that one.

How do I now move everything including untracked files over to the remote branch that was created?

As I understand your question, you are currently working in a branch named ENGA-2604. That is, if you run git status, its first line will say:

You can easily rename any branch, including the one you are on. So just rename this branch:

The three commands git branch -m, git fetch, and git branch --set-upstream-to have no effects at all upon your existing index and work-tree. So no work you are doing right now has changed in any way. You've just renamed your local branch so that its name is now feature/ENGA-2604, and set it up to "track"1 your origin/feature/ENGA-2604.

The easiest way is to set the remote tracking branch for your local branch. Be sure to fetch the upstream branch first:

If you also want your local branch name to match, you can rename it:

Now you can git pull to merge in work from other developers or git push to push your own work.

19
Merge local branch into remote branch other than master?