How to remove .html from URL?

How to remove .html from the URL of a static page?

I think some explanation of Jon's answer would be constructive. The following:

checks that if the specified file or directory respectively doesn't exist, then the rewrite rule proceeds:

But what does that mean? It uses regex (regular expressions). Here is a little something I made earlier... 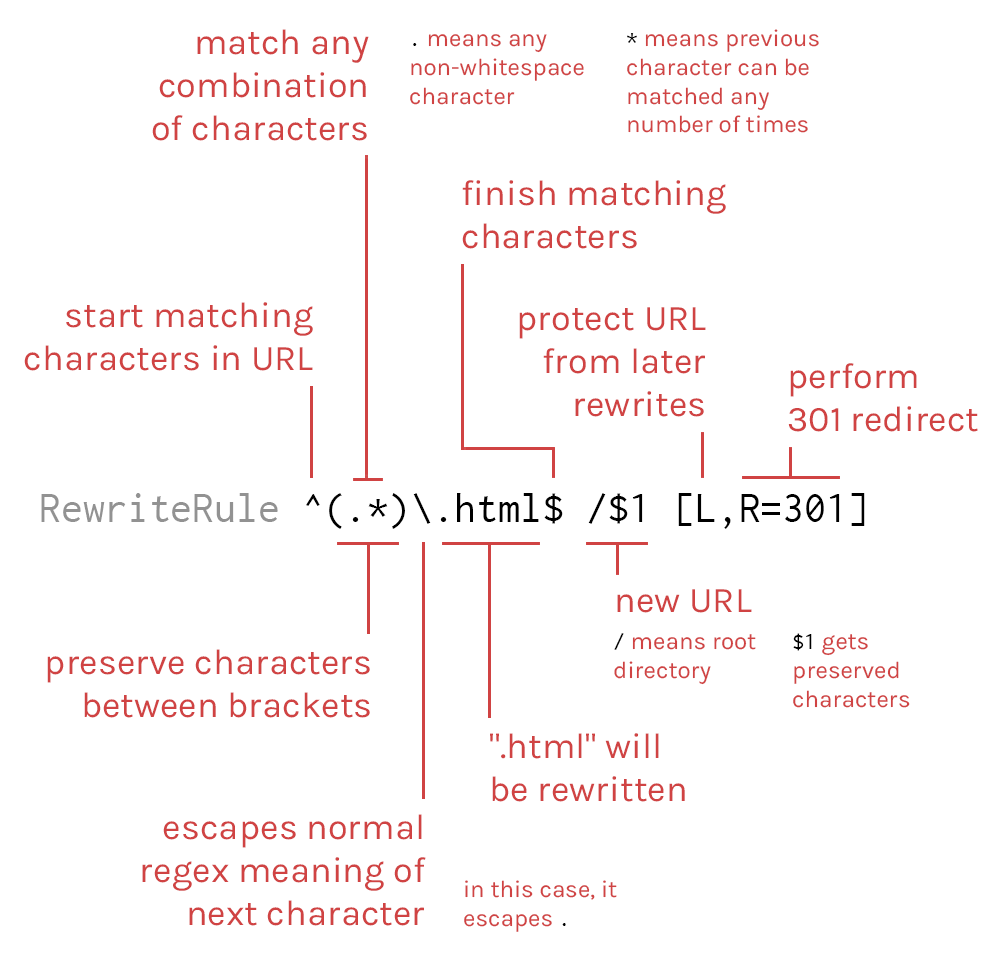 Update: I was slightly mistaken, . matches all characters except newlines, so includes whitespace. Also, here is a helpful regex cheat sheet

To remove the .html extension from your urls, you can use the following code in root/htaccess :

NOTE: If you want to remove any other extension, for example to remove the .php extension, just replace the html everywhere with php in the code above.

Also see this How to remove .html and .php from URLs using htaccess` .

This should work for you:

With .htaccess under apache you can do the redirect like this:

As for removing of .html from the url, simply link to the page without .html

You will need to make sure you have Options -MultiViews as well.

None of the above worked for me on a standard cPanel host.

For those who are using Firebase hosting none of the answers will work on this page. Because you can't use .htaccess in Firebase hosting. You will have to configure the firebase.json file. Just add the line "cleanUrls": true in your file and save it. That's it.

After adding the line firebase.json will look like this :

Thanks for your replies. I have already solved my problem. Suppose I have my pages under http://www.yoursite.com/html, the following .htaccess rules apply.

Good question, but it seems to have confused people. The answers are almost equally divided between those who thought Dave (the OP) was saving his HTML pages without the .html extension, and those who thought he was saving them as normal (with .html), but wanting the URL to show up without. While the question could have been worded a little better, I think it’s clear what he meant. If he was saving pages without .html, his two question (‘how to remove .html') and (how to ‘redirect any url with .html’) would be exactly the same question! So that interpretation doesn’t make much sense. Also, his first comment (about avoiding an infinite loop) and his own answer seem to confirm this.

So let’s start by rephrasing the question and breaking down the task. We want to accomplish two things:

There’s nothing difficult about doing either of these things. (We could achieve the second one simply by enabling MultiViews.) The challenge here is doing them both without creating an infinite loop.

Dave’s own answer got the job done, but it’s pretty convoluted and not at all portable. (Sorry Dave.) Łukasz Habrzyk seems to have cleaned up Anmol’s answer, and finally Amit Verma improved on them both. However, none of them explained how their solutions solved the fundamental problem—how to avoid an infinite loop. As I understand it, they work because THE_REQUEST variable holds the original request from the browser. As such, the condition (RewriteCond %{THE_REQUEST}) only gets triggered once. Since it doesn’t get triggered upon a rewrite, you avoid the infinite loop scenario. But then you're dealing with the full HTTP request—GET, HTTP and all—which partly explains some of the uglier regex examples on this page.

I’m going to offer one more approach, which I think is easier to understand. I hope this helps future readers understand the code they’re using, rather than just copying and pasting code they barely understand and hoping for the best.

Let’s break it down…

The first rule is pretty simple. The condition matches any URL ending in .html (or .htm) and redirects to the URL without the filename extension. It's a permanent redirect to indicate that the cropped URL is the canonical one.

The second rule is simple too. The first condition will only pass if the requested filename is not a valid directory (!-d). The second will only pass if the filename refers to a valid file (-f) with the .html extension added. If both conditions pass, the rewrite rule simply adds ‘.html’ to the filename. And then the magic happens… [END]. Yep, that’s all it takes to prevent an infinite loop. The Apache RewriteRule Flags documentation explains it:

I use this .htacess for removing .html extantion from my url site, please verify this is correct code:

Resorting to using .htaccess to rewrite the URLs for static HTML is generally not only unnecessary, but also bad for you website's performance. Enabling .htaccess is also an unnecessary security vulnerability - turning it off eliminates a significant number of potential issues. The same rules for each .htaccess file can instead go in a <Directory> section for that directory, and it will be more performant if you then set AllowOverride None because it won't need to check each directory for a .htaccess file, and more secure because an attacker can't change the vhost config without root access.

If you don't need .htaccess in a VPS environment, you can disable it entirely and get better performance from your web server.

All you need to do is move your individual files from a structure like this:

Your web server will then render the appropriate pages - if you load /about/, it will treat that as /about/index.html.

This won't rewrite the URL if anyone visits the old one, though, so it would need redirects to be in place if it was retroactively applied to an existing site.

In my case I had an issue where RewriteCond %{REQUEST_FILENAME}.html -f was triggering (believing the file existed) even when I was not expecting it :

So the file it was trying to load (believing if was /var/www/example.com/page.html) were :

Only the first one is actually pointing to an existing file, other requests were giving me 500 errors as it kept believing the file existed and appending .html repeatedly.

Here is my entire .htaccess (I also added a rule to redirect the user from /index to /) :

Here is a result example to help you understand all the cases :

Considering I have only 2 html files on my server (index.html & page.html)

Also, just to help you debug your redirections, consider disabling the network cache in your browser (as old 301 redirections my be in cache, wich may cause some headaches 😅):

first create a .htaccess file and set contents to -

To remove the .html extension from your URLs, you can use the following code in root/htaccess :

Use a hash tag.

May not be exactly what you want but it solves the problem of removing the extension.

Say you have a html page saved as about.html and you don't want that pesky extension you could use a hash tag and redirect to the correct page.

For this, you have to rewrite the URL from /page.html to /page You can easily implement this on any extension like .html .php etc

Not the answer you're looking for? Browse other questions tagged html .htaccess mod-rewrite or ask your own question.

2483
Make a div fill the height of the remaining screen space
1767
Where should I put <script> tags in HTML markup?
2826
How do I modify the URL without reloading the page?
1129
How to prevent buttons from submitting forms
2447
How to create an HTML button that acts like a link
1222
How to remove the space between inline/inline-block elements?
8439
Why does HTML think “chucknorris” is a color?
1618
Hide scroll bar, but while still being able to scroll