Cannot preview in this file - [App Name].app may have crashed on Xcode 11 Beta 5

The Xcode preview does not work if i add a EnviromentObject property wrapper. Everytime i add one the Canvas doesn't build and i get this error:

Cannot preview in this file - [App Name].app may have crashed

If i replace the EnviromentObject property wrapper with ObservedObject and initialize it everything works fine.

It doesn’t load the preview as well when i am using a binding:

As @graycampbell suggested, you need to ensure that the EnvironmentObject is provided to your ContentView in the SceneDelegate. While a lot of the preview / canvas mechanics are in a black box, Xcode's UI would suggest that invoking a new preview or refreshing an existing one, builds (or updates relevant parts of) a variant of your app even for the regular preview, as opposed to the "Live Preview". This process can fail if the SceneDelegate isn't set up correctly.

For your @Binding problem, Binding.constant(_:) should help. Per the SwiftUI Documentation .constant does the following:

Creates a binding with an immutable value.

This is what you want for your preview, instead of the @State your sample code shows. You can see an example of .constant in use in Section 3 of this Apple tutorial.

So instead of this:

you can do the following:

With this change, previews of your code work perfectly for me. Keep in mind that you again need to provide a value to this Binding in your SceneDelegate or any other place in which you use this particular ContentView. Otherwise you will run into a problem similar to the one you faced with EnvironmentObject, just that this particular omission luckily is highlighted by a compiler error.

I'm assuming based on the code you provided that your SceneDelegate looks like this:

I'm not going to pretend I know exactly what the canvas is doing behind the scenes when it generates a preview, but based on the fact that the error specifically states that the app may have crashed, I'm assuming that it's attempting to launch the entire app when it tries to generate a preview. Maybe it needs to use the SceneDelegate to launch the preview, maybe it's something else entirely - I can't say for sure.

I had the same problem, and I found out what the reason was. I simply forgot to add the .environmentObject() modifier to ContentView() in the preview part.

That was why Xcode built it, without showing a code-mistake, but crashed on preview in canvas. - Simple mistake, I know.

Looks like Xcode issue. Try to use blue button instead of "Try Again".

I do have a workaround for this, but yes that's true that bug is in XCode.
To fix this. you must set up your SceneDelegate first.

You must set up your preview too. As seems you have already done that.

At last, just declare one @State variable inside your ContentView, of the same type you @Published your @EnvironmentObject, whether or not you use it for binding anywhere in ContentView doesn't matter.

You can see below in my code, it works like a charm. 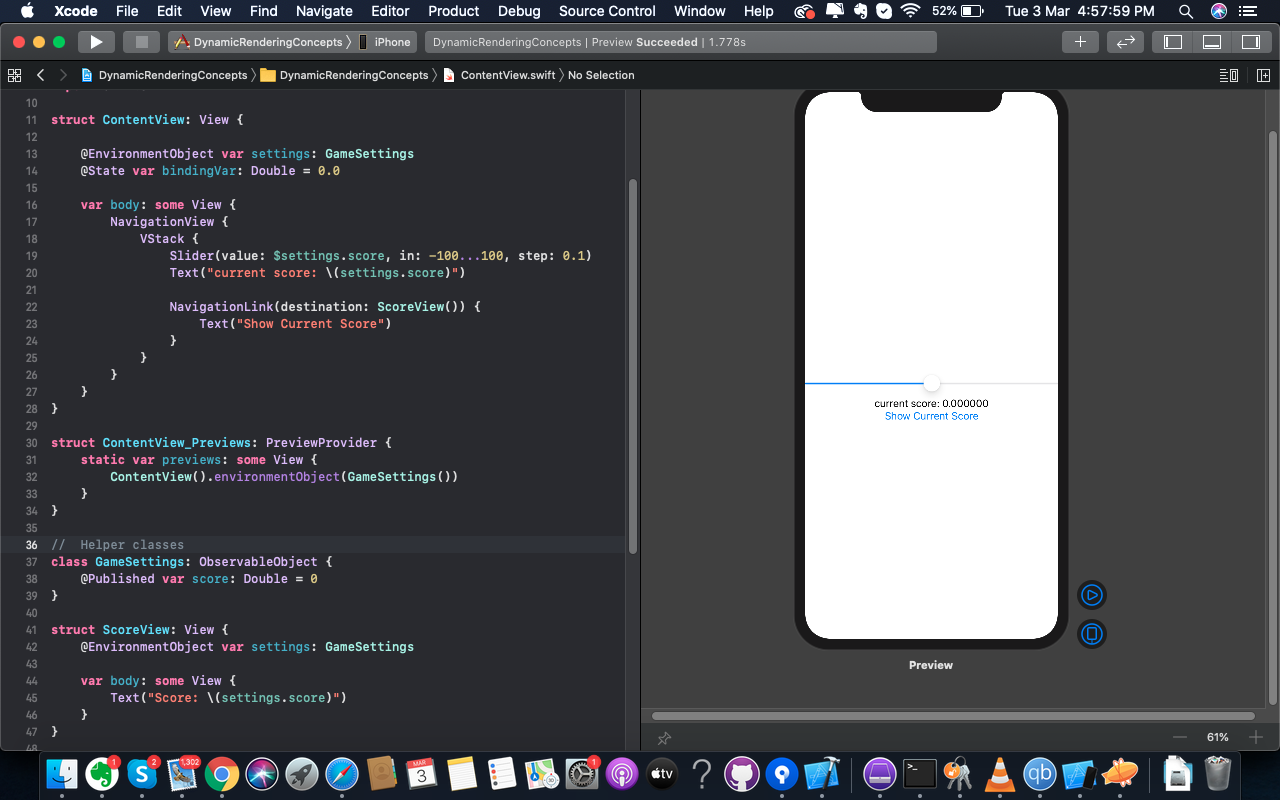 Not the answer you're looking for? Browse other questions tagged ios iphone xcode swiftui xcode11 or ask your own question.