More generally, what is a path for an arc for part of a circle with

Expanding on @wdebeaum's great answer, here's a method for generating an arced path:

and in your html

You want to use the elliptical Arc command. Unfortunately for you, this requires you to specify the Cartesian coordinates (x, y) of the start and end points rather than the polar coordinates (radius, angle) that you have, so you have to do some math. Here's a JavaScript function which should work (though I haven't tested it), and which I hope is fairly self-explanatory:

Which angles correspond to which clock positions will depend on the coordinate system; just swap and/or negate the sin/cos terms as necessary.

The arc command has these parameters:

For your first example:

rx=ry=25 and x-axis-rotation=0, since you want a circle and not an ellipse. You can compute both the starting coordinates (which you should Move to) and ending coordinates (x, y) using the function above, yielding (200, 175) and about (182.322, 217.678), respectively. Given these constraints so far, there are actually four arcs that could be drawn, so the two flags select one of them. I'm guessing you probably want to draw a small arc (meaning large-arc-flag=0), in the direction of decreasing angle (meaning sweep-flag=0). All together, the SVG path is:

For the second example (assuming you mean going the same direction, and thus a large arc), the SVG path is:

Again, I haven't tested these.

One of the advantages of endpoint parameterization is that it permits a consistent path syntax in which all path commands end in the coordinates of the new "current point".

So basically it's a side-effect of arcs being considered as part of a larger path rather than their own separate object. I suppose that if your SVG renderer is incomplete it could just skip over any path components it doesn't know how to render, as long as it knows how many arguments they take. Or maybe it enables parallel rendering of different chunks of a path with many components. Or maybe they did it to make sure rounding errors didn't build up along the length of a complex path.

The implementation notes are also useful for the original question, since they have more mathematical pseudocode for converting between the two parameterizations (which I didn't realize when I first wrote this answer).

I slightly modified the answer of opsb and made in support fill for the circle sector.

This is an old question, but I found the code useful and saved me three minutes of thinking :) So I am adding a small expansion to @opsb's answer.

If you wanted to convert this arc into a slice (to allow for fill) we can modify the code slightly:

and there you go!

Note for the answer-seekers (who I also was) - if using arc is not obligatory, a far simpler solution to draw a part-circle is to use stroke-dasharray of SVG <circle>.

Divide dash array into two elements, and scale their range to the desired angle. Starting angle can be adjusted using stroke-dashoffset.

Not a single cosine in sight.

@opsb's answers is neat, but the center point is not accurate, moreover, as @Jithin noted, if the angle is 360, then nothing is drawn at all.

@Jithin fixed the 360 issue, but if you selected less than 360 degree, then you'll get a line closing the arc loop, which is not required.

I fixed that, and added some animation in the code below:

I wanted to comment on @Ahtenus answer, specifically on Ray Hulha comment saying the codepen does not show any arc, but my reputation is not high enough.

The reason for this codepen not working is that its html is faulty with a stroke-width of zero.

I fixed it and added a second example here : http://codepen.io/AnotherLinuxUser/pen/QEJmkN.

An image and some Python

Just to clarify better and offer another solution. Arc [A] command use the current position as a starting point so you have to use Moveto [M] command first.

Then the parameters of Arc are the following:

If we define for example the following svg file: 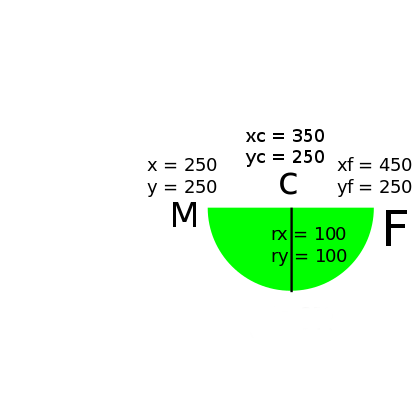 We are looking for circles so we set rx equal to ry doing so basically now it will try to find all the circle of radius rx that intersect the starting and end point.

You can have a more detailed explanation in this post that I wrote.

Reversing of start and end points by using:

Is confusing (to me) because this will reverse the sweep-flag. Using:

with the sweep-flag = "0" draws "normal" counter-clock-wise arcs, which I think is more straight forward. See https://developer.mozilla.org/en-US/docs/Web/SVG/Tutorial/Paths

A slight modification to @opsb's answer. We cant draw a full circle with this method. ie If we give (0, 360) it will not draw anything at all. So a slight modification made to fix this. It could be useful to display scores that sometimes reach 100%.

ReactJS component based on the selected answer:

Apologies to Wiley; I hadn't read to the end and see he has spotted the same thing. If you like my post, upvote his instead!

you can use JSFiddle code i made for answer above:

all you need to do is change last line console.log code and give it your own parameter:

Converted the accepted answer to PHP code. Helps in generating the arc on the server.

6
Outlining a circular element with CSS
3
Interpolate line to make a half-circle/arc in d3
3
SVG path with rounded corners as arcs of a circle
4
How to create a circle progress inside a Vue component
1
SVG: filled arc animation?
2
Drawing parts of circle's circumference in SVG
4
Draw arc by angle in SVG
0
Draw Arc initial point, radius and final point in JavaScript Canvas
2
How to create a circular arc (sector) with a background image?
3
Get ending line coordinates in javascript based on starting coordinates and predefined angle
See more linked questions

738
Do I use <img>, <object>, or <embed> for SVG files?
469
How to change color of SVG image using CSS (jQuery SVG image replacement)?
87
Can I apply a gradient along an SVG path?
3
SVG path with rounded corners as arcs of a circle
9
svg arc, how to determine sweep and larg-arc flags given start end & via point
1024
How can I change the color of an 'svg' element?
671
img src SVG changing the styles with CSS
2
Draw segment of circle on SVG
6
Convert PATH from SVG to POLYLINE
1
Dynamically compute SVG Path for a full circle with JavaScript