There are are few posts out there about this. You spend hours going through each answer, testing, reading comments, to find that there is no solution. What have you done in 2019, Chrome 76, that works?

Update, April 2020: They changed it again. As of Chrome 81, autocomplete="some-unrecognised-value" is no longer effective at disabling the Autocomplete mechanism. However, Autofill now seems to be a lot more conservative than it was before - it still doesn't follow the spec (a field with name="email" and autocomplete="off" will still receive Autofill suggestions) but it doesn't offer up spurious address fragments on random form fields. My recommendation right now would therefore be to use autocomplete="off". If you want to do that on a field named email, you're probably out of luck though :-(

TL,DR: There appears to be no setting for the autocomplete attribute that will reliably turn off all autocomplete dropdowns. However, the circumstances that have led to this are quite convoluted and worth documenting, to hopefully clear up the masses of conflicting advice...

There are two distinct mechanisms present in current (76.0.3809.132) versions of Chrome, which we'll refer to as Autofill and Autocomplete (not necessarily their official names):

The Autofill feature attempts to fill in forms using the address information stored in your browser settings. It can be identified by the "Manage addresses..." option (or similar) at the bottom of the dropdown. This feature does not honour autocomplete="off" or autocomplete="false", as a deliberate decision on the part of the Chrome developers.

In a statement outlining this decision, zkoch offered this workaround:

As an example, if you have an address input field in your CRM tool that you don't want Chrome to Autofill, you can give it semantic meaning that makes sense relative to what you're asking for: e.g. autocomplete="new-user-street-address". If Chrome encounters that, it won't try and autofill the field.

This is the basis of attempted solutions such as autocomplete="nope"; the Autofill mechanism will skip any fields with autocomplete attribute values it doesn't recognise.

The code that implements this decision, for the record: https://chromium.googlesource.com/chromium/src/+/refs/tags/78.0.3903.1/components/autofill/core/browser/form_structure.cc#1218

The Autocomplete feature provides a dropdown of previously-submitted values from this form field. This dropdown does not have a "Manage addresses..." option. Autocomplete does honour the autocomplete="off" or autocomplete="false" attribute; any other value (including 'invalid' ones such as autocomplete="nope") will leave it enabled.

Autocompletion dropdowns cannot be turned off through the autocomplete dropdown; any value that disables Autofill will leave Autocomplete enabled, and vice versa. Anyone who thinks they've found a working solution (either through autocomplete or some other method such as CSS hacks) should check that it works against both mechanisms.

Unfortunately it's probably going to be an uphill struggle to convince Chrome's developers that this is broken. The developers of Autofill apparently believe that they made a calculated decision to break autocomplete="off" while offering web developers an alternative; that alternative is broken, for more subtle reasons than they realise. From their perspective, the resulting howls of protest are coming from disgruntled developers too lazy to jump through one little hoop and update their autocomplete="off" attributes. In all the noise, the message isn't getting through: the hoop is broken.

Try using type="search" instead of "text" for your input field, I've done this several time and it works for me.

Standard methods like autocomplete="off" are now working almost fine for the latest versions of Chrome. Except for this one: 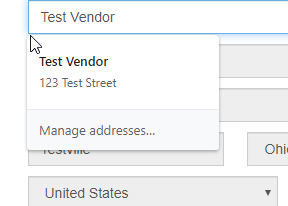 This thing is a real bummer because it doesn't only disrespect the standard/non-standard values like "nope" but there's literally no way to turn this off unless the input is not even remotely related with "addressy" terms.

And there you go. No more pesky menus for managing addresses, nor any regular autocompletion menus.

As gasman's answer explains, both the autofill and autocomplete features must be disabled, which doesn't seem possible on a single input.
The only working solution I've found is to setting autocomplete="off" on the input and add hidden fake inputs before the real input that fool autofill, like so:

* This answer is incorrect. I've published a better (but uglier) solution as a new answer and kept this answer since some parts may still be useful. If that's not how to deal with incorrect answers on stackoverflow, feel free to delete this one *

Consider using autocomplete=<nonce>, where <nonce> is unique per field and across page loads.

For example, if a field is the N-th field created after the page was requested at timestamp TS, its <nonce> can be chosen to be nope_<TS>_<N>.

Effect on autocomplete: since <nonce> is a custom value for autocomplete, chromium does not activate the autocomplete function (see form_structure.cc).

Effect on autofill: chromium recognizes a field by comparing its fingerprint with those of earlier encountered fields (see form_field_data.cc). If recognized it may offer a list of remembered values. The fingerprints contain the value of the autocomplete attribute. Since no two nonces are equal, no field is recognized.

Disabling autocomplete: The autocomplete function stores field names and their values when a form is submitted. There's (almost, see note 1) nothing sensible to be done to prevent storage except setting autocomplete to "off"/"false" (see why). Unfortunately that's not an option as it would enable autofill.

However it's possible to prevent retrieval of previous values by appending "!<nonce>" to the field names, where <nonce> is unique per page load (thus making field names unrecognizable).

On the client side this can be achieved by something like the following line of javascript (upon page load):

On the server side the part (if any) starting at "!" should be dropped from variable names (upon receiving post variables).

PS: this answer is an erratum to my earlier solution which is cleaner but wasn't sufficiently tested and - as gasman rightly pointed out - doesn't work for ordinary forms. This new solution was tested on Chrome Canary 79, does work, has relatively small impact and degrades nicely. Still, I feel guilty about publishing this hack and will feel even more guilty if I ever encounter it in real forms. It is *very* dirty.

Note 1: the only way to prevent storage that does make sense is to not set the name attribute in the first place (or to unset it), which necessitates intercepting the submit event to post the data "manually" (using XMLHttpRequest). Since the question is about forms and this strategy bypasses the traditional form-mechanism I've not elaborated on that approach. It's a nicer solution though.

Addendum: I decided to follow up on note 1 since I really dislike having a non-localized solution. Here's a localized version in vanilla JS that limits all impact to a single spot on the client side. Append it as a script to the document body or put it in the onload handler of the document.

You need to use a random value, meaning a value that will change each time you load the page.

It seems to work on address fields but it has no effect on login fields. I haven't tested with credit card fields.

try this, I used this little trick and it worked until now (September 2020). i hope this works for a lot of people

It is made to be used on the form tag, it takes few parameters and can be nested with other jQuery methods.

It preserves the original names upon submit

Please fork it if you have ideas

I couldnt get any of these suggestions to work... so I just made my input a textarea, made cols="1" and disabled adjusting the space.

This is the current working solution for Chrome 76.

Not the answer you're looking for? Browse other questions tagged forms google-chrome autocomplete street-address or ask your own question.