I created a page (basically a tool) which is meant to be cloned from Github by a user and used on the user's PC so they don't need a web server to use it (and so I don't need webserver to make tool available for others).

I wanted the page to use a font I've chosen so I downloaded the font (.ttf) and used @font-face to load the .ttf file (placed into the same directory as the .css file):

When I host the tool on my webserver (which I actually do have but that's kind of beside the point), the page displays with the font all right: https://edison23.net/tocjs/tocjs.html . However, when I try to open the page on localhost on my PC, I get the CORS blocked warning in Firefox's console and the page uses some installed sans-serif font installed on the machine instead:

I've Googled around to see what are the options to avoid this and haven't been able to find a solution since all the advice I've found are meant for loading fonts on a webserver, not on a user's local PC.

So, dear SO fellow users, is there some reasonably straightforward way to get aournd this?

edit: I've posted documentation of the whole problem and solution to my blog if the details here were not enough.. well.. detailed: https://www.edison23.net/css-webfonts-in-a-locally-hosted-html-web-page/

You can include your font data directly inside your css as a base64 content (check this answer by damianfrizzi).

So you can include this custom-css-containing-a-font file and use it to define a new font-face, and then use this font-face on your other css file.

edit: Found this page on fontsquirrel from this question that has this parameter:

The zip file that you download then contain your font embedded in a css file: 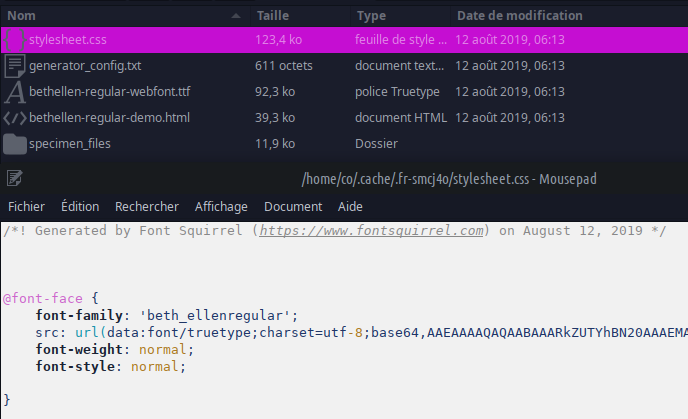 94
Converting and rendering web fonts to base64 - keep original look
15
Is it possible to embed font files into html just like css?

35
use custom fonts with wkhtmltopdf
1
Why Firefox ignores custom font from @font-face?
0
What font is being used for the font-family 'heading' in this example?
25
How the licensed web font is getting rendered?
0
Is an @font-face directive required after importing a font?
0
Strange line-height on mobile browsers
0
Cross-Origin @font-face
1
Fonts difference between website & Invsion (Designers & Front End developers tool)
0
Google Font not displaying when hosted locally
0
Why is @font-face not able load all font weights in ttf format?