Nuget Restore in a Docker Container

I am trying run nuget restore mySolution.sln in a docker container.

For the most part it seems to work just fine. The packages seem to restore fine, but before they do, it shows this error:

From what I read, this means I need the nuget package MSBuild.Microsoft.VisualStudio.Web.targets. I did a nuget install of that, but the error does not go away. (It just drops it where ever I run it. I tried putting it with my solution and in the packages folder. Neither had any effect.)

How can I fix this error using command line tools? (No GUI because this is a docker container).

I assume what you're trying to build is a web-application, but you haven't installed corresponding workloads in your build tools package.And that's the cause of this issue. (Agree with imps)

Open the Visual Studio Installer in Start menu and you can modify the workloads of your msbuild package: 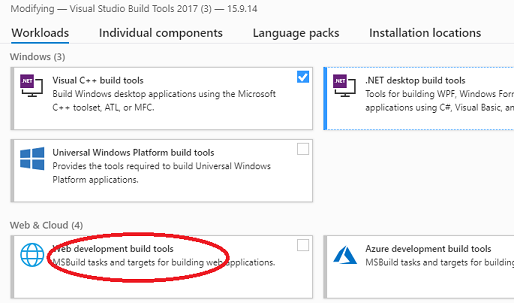 After I install the Web development build tools, I now get the newly created WebApplications folder in path C:\Program Files (x86)\Microsoft Visual Studio\2017\BuildTools\MSBuild\Microsoft\VisualStudio\v15.0.

Not the answer you're looking for? Browse other questions tagged visual-studio docker msbuild or ask your own question.

199
How can I install the VS2017 version of msbuild on a build server without installing the IDE?
3
gyp ERR! stack Error: `C:\Program Files (x86)\Microsoft Visual Studio\2017\BuildTools\MSBuild\15.0\Bin\MSBuild.exe` failed with exit code: 1
0
MSBuild 16 is not publishing without visual studio installed
0
How can I update the ToolVersion in every .csproj file in my application