I have exported an Android App Bundle file to upload at Play store with NDK downloaded from Unity desired location because Android Studio NDK file is not compatible with Unity.

I got this kind of error message when I upload the build: 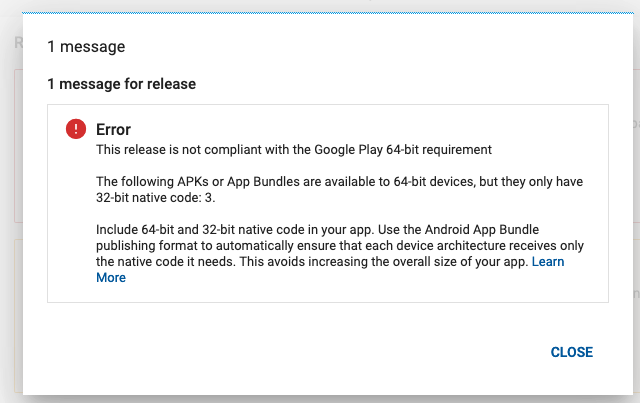 Here you have SDK and NDK path setup:

Now, what is the solution for this?

What step I did wrong that I can't able to understand?

Please don't mention about the duplicate question because I have tried other options they didn't work for me.

It's an issue with google play and x86 build that do not offers a 64bit counterpart code. Disabling x86 build fix this issue.

I had the same issue, and indeed it was the fault of uploading with wrong 'Supported architectures' selected.

So now I have my architectures selected like this 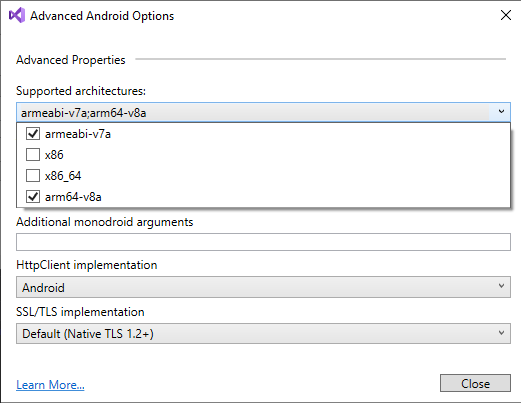 Anyway I fixed that, rebuilt the solution (using Xamarin Forms in Visual Studio 2019 Community), archived it and uploaded to Google Play Console. It did not work!

I lost half a day, until I found this

So I turned 'Version name' back to 1.0.0.0 and upped 'Version number' (VS19C/XamarinForms alias for 'Version code') to 2, rebuilt, archived and uploaded to Google Play Console and I was almost there, but not there yet.

I got this kind of clear and simple reply from Unity Support Person on my Unity Forum post and this worked for me:

Here is the snapshot for the reply:

I hope now, this becomes easy to solve this problem.

for now it is working with removing x86 architecture

I'm having exactly same problem with an update for my game... I just checked my bundle, and for I could see I have the 64bit code there...

Okay, Guys here is the solution to the problem. Open Unity Hub. Click on "Installs" and you'll see all the install versions of unity on your system. On Top Right of the, each Unity Version installed there are three vertical dots, click on them and choose "Add Modules". The Very First Option is "Android Build Support", expand it and choose "Unity SDK & NDK Tools". What it will do now, it will install the SDK and NDK which support the particular version of unity you are using. After completion of Downloading and installation. Open Unity Editor. Choose Unity > Preference> External Tools and browse for the SDK and NDK you just downloaded and installed. The location is as below, Navigate to the location where Unity is installed and choose Unity > Hub >Editor> Unity(Version, you installed NDK and SDK for) >Playback Engine > ANdroid Player > NDK/SDK.

You are all set now.

Now what you have to do this to go into Player Setting> other settings > Target Architecture > Choose ARMv7 and ARMv64(this is necessary).

Build the APK and you are all set. Accept the answer if it solves your issue. Cheers.

I resolved this issue by updating to the newest OPENCV Framework from https://opencv.org

I replaced the sdk file in the jni folder from the latest OPENCV Sdk And also updated my libs and obj folder to support 64-bit support.

If you are using Android Studio with Gradle,

Not the answer you're looking for? Browse other questions tagged android unity3d google-play or ask your own question.