In Visual Studio - is there a way to profile the time spent in the inner methods of .NET Framework ?

An example - consider a good-old fashioned ArrayList, and adding some random numbers to it:

I can step into the .NET Framework source code just fine while debugging. One can use the default Microsoft symbols and the source code for .NET (as described in this answer) or go the dotPeek route (detailed here). As for the cleanest option of just using the Reference Source symbols - as Hans Passant was saying in his answer almost 5 years ago - the framework version (down to security updates installed) for which the symbols were created would have to match exactly to your version; you'd have to be really lucky to get that working (I wasn't). Bottom line - there are 2 ways I can successfully use to step into the .NET source code.

For the sample at hand, there aren't big differences between the Reference Source code and the dotPeek reverse-engineered code - that is for the methods invoked by ArrayList's Add - namely the Capacity setter and ArrayList's EnsureCapacity, of which the latter can be seen below (ReferenceSource code on the left, dotPeek source code on the right):

Running an "Instrumentation" profiling session will return a breakdown of the time spent in each method, but as long as the .NET types go, it appears that one only gets to see the methods the respective code called "directly" - in this case the function that Adds elements to the ArrayList, the one that generates a Random int, and the respective types' constructors. But there's no trace of EnsureCapacity or Capacity's setter, which are both invoked heavily by ArrayList's Add.

Drilling down on a specific .NET method doesn't show any of the methods it called in turn, nor any source code (despite being able to see that very code earlier, while stepping into with the debugger): 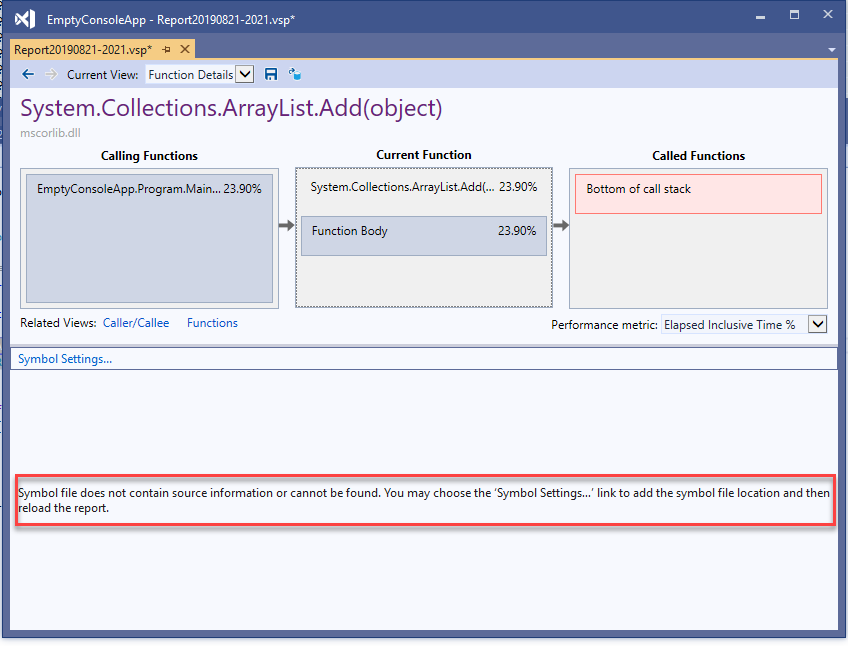 How can one get to see those additional, "inner" .NET methods ? If Visual Studio can't do it, perhaps another tool can ?

PS There is a very similar question here, however it's almost 10 years old, and there's not much there that brings light to the problem.

Later Update: As KolA very well points out, JetBrains dotTrace can show this. A line-by-line profiling session below:

perhaps another tool can ?

DotTrace can profile performance down to properties if that's what you're looking for. This example is for generic List<T> not ArrayList but I think it shouldn't matter.

Not the answer you're looking for? Browse other questions tagged c# .net visual-studio profiling or ask your own question.

1015
How can I get the application's path in a .NET console application?
646
How do I get the current username in .NET using C#?
0
How to track the .net framework methods in “Call Tree” when profiling in Visual Studio
145
Determine .NET Framework version for dll
120
How do you enable “Enable .NET Framework source stepping”?
439
How is Math.Pow() implemented in .NET Framework?
1734
Is there a reason for C#'s reuse of the variable in a foreach?
1506
Why not inherit from List<T>?
1
Missing Methods in .NET Framework Source Code
905
What is the difference between .NET Core and .NET Standard Class Library project types?