I am currently trying to deploy the default react web app to Azure and I am encountering an issue where though I deploy the contents of my build folder to the azure hosted /site/wwwroot folder I end up on the following page when going to my hosted address: https://[project_name].azurewebsites.net/

I intend to deploy the default create-react-app react application so that I may have the process down for when I deploy my real site. The process I have followed is pretty much exactly what is mentioned in this article https://medium.com/@to_pe/deploying-create-react-app-on-microsoft-azure-c0f6686a4321

In the end my Azure site's contents look like this 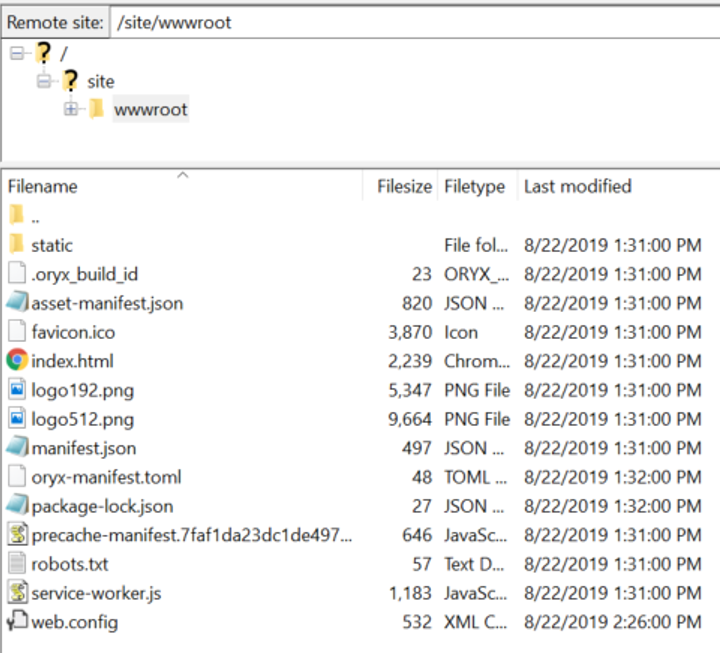 At this point when I try to access the Azure site I get the "Hey, Node developers!" page which implies my code is not deployed. Any thoughts as to why this might be the case?

*** I have a hunch that during the configuring of the Azure Web Api something is not set up correctly perhaps because I select Node 10.14 as my Runtime stack simply because that is the version of Node that I have installed and am using with my local React app.

Thank you folks for your time.

Another approach is to configure Azure Linux Web App Service to run a startup command to serve your React app in "Settings > General settings > Startup Command":

If you use react-router and wants to make any direct access on custom routes be handled by index.html you need to add --spa option on the same command.

Using --spa option pm2 will automatically redirect all queries to the index.html and then react router will do its magic.

You can find more information about it in pm2 documentation: https://pm2.keymetrics.io/docs/usage/pm2-doc-single-page/#serving-spa-redirect-all-to-indexhtml

You have created a Linux App Service - your web.config won't work because there is no IIS.

If you don't select node as the runtime stack, your app will work for the most part because it serves the files like a static web host. However I would suggest to keep the runtime stack as node and add the following file to your deployment in the wwwroot folder:

There's an extremely simple way to overcome this problem, and although it is not perfect, it works both on AWS, Microsoft Azure, and probably any other hosting:

Microsoft Azure Collective See more
This question is in a collective: a subcommunity defined by tags with relevant content and experts.