Can't assign xcassets to the main target on Xcode 11

On Xcode 11 my .xcassets, that don't cause any issue on Xcode 10, cause the compilation to fail with the following message:

The only way I'm able to compile the project is by removing the .xcassets from the target with the obvious downside of having them not available on the build.

PS: This is happening for 2 ObjC projects.

Add below line at the top of your pod file, right after platform :ios

The answer above is only partially correct: yes, this happens because the pod phase produces Assets.car as an output file, which coincides with the output name for your xcassets - hence Multiple commands produce... error: one command being the script phase [CP] Copy Pods Resources and another - your own project's compile command.

NB: like the solution above, you will have to do this every time after updating your pods, since [CP] Copy Pods Resources is generated every time you run pod install or pod update

To be sure that all build steps are performed in the correct order, yet as many steps in parallel as possible, Xcode needs to know for every build step which input files it depends on and which output files it will generate.

In your case the problem is that your Copy Resources build phase contains one (or more) .xcassets bundle(s). Xcode won't just copy these bundles, instead it will combine them, convert and optimize their content, and create a file called Assets.car that contains the content of all the assets catalogs in your project.

Yet if you integrate a Pod and this Pod also has an asset catalog, exactly the same thing will happen and a second Assets.car file is created and now Xcode has a problem: Two build steps both say they create an Assets.car file. Which one shall win? Which of these two files shall end up in the final application? And what about other steps that depend on this file? After which of the build steps do they have to run? This is a serious problem that Xcode cannot resolve.

There are currently two possibly solutions:

There is an on-going bug report for this issue, you can find it here:
https://github.com/CocoaPods/CocoaPods/issues/8122

Yet the problem currently is, that every possible solution other than the two mentioned above would basically be an ugly hack and the Cocoapods developers are not happy implementing ugly hacks. The best solution, as hard as it seems, is probably to not fix that problem at all but to stop supporting resources in Podspec files and make resources_bundle mandatory for Pods that contain own resources.

In your library project, such as "LADetailPage", open Targets' "Build Phases", create a predefined phase named "Copy Files", then drag your *.xcassets to the new phase. 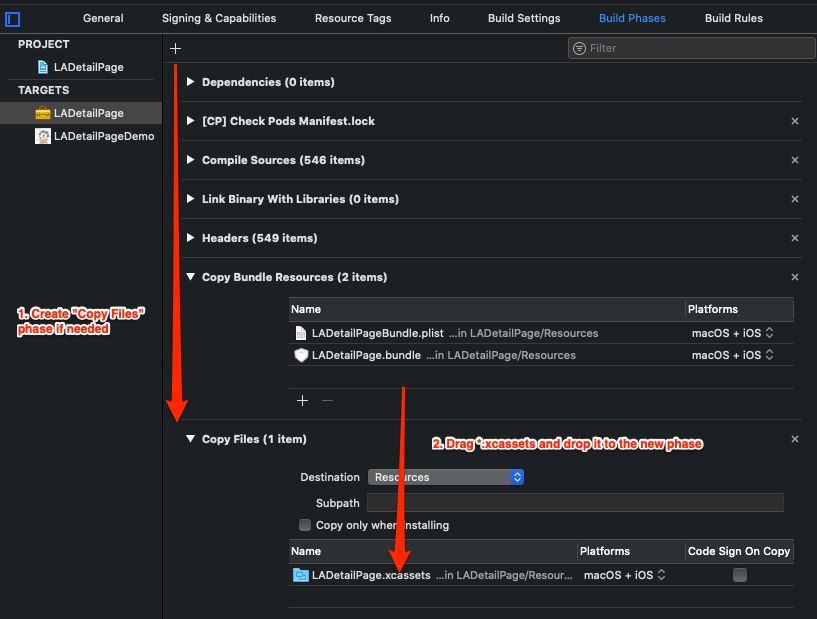 Please check your dependencies if there is some pods use 'resources'(not 'resources_bundle') to link its own xcassets in podspec. This way has beed deprecated, because its output file name is 'Assets.car'. It is same with your project xcassets' compile output name.

12
Use resource bundles in CocoaPods