I changed the name of the package to "com.xxx.xxx" with Refactor > Rename and changed the name of the package and application identifiers tomanifest and gradle. Successful synchronization, everything is OK. According to the instructions delevopers.google Getting Started and delevopers.google Intermediate Ads ads built into my application, previously included in the project structure AdMob. When using gradle, but it cost me to try to run the application on a physical level.

Well since you did not post your build.gradle file

I suspect that you have the old android support libraries and you are trying to migrate to AndroidX, According to your error it appears that you should be using this one instead

And a couple of other files related files in that same manner, now before trying to manually fix the paths of androidx , I would recommend that you update to the latest version of Android Studio (3.4.2) and do click Migrate to AndroidX inside the refactor menu 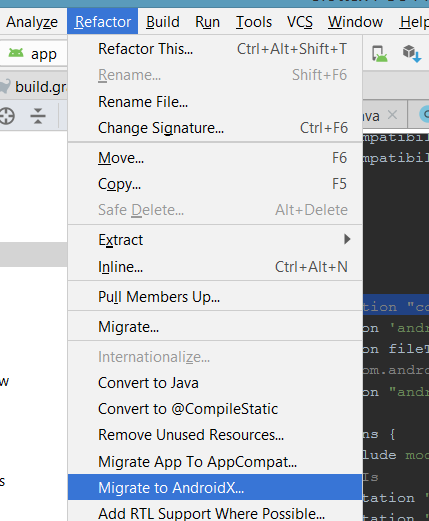 Now sometimes, the error might be in the libraries you want to depend to If that's the case , heres a workaround ...

Do a sync , if you still see errors ... then try to check for dependencies to see which library is the culprit

Where app is your module's name

Not the answer you're looking for? Browse other questions tagged android android-studio admob android-manifest androidx or ask your own question.