I'm working on a site where users can describe a physical object using (amongst many other things) any color in the rgb 0-255 range. We offer some simplified palettes for easy clicking but a full color wheel is a requirement.

Behind the scenes, one of the processes compares two user descriptions of the object and scores them for similarity.

What I'm trying to do is get a score for how similar the 2 colors are in terms of human perception . Basically, the algorithm needs to determine if a 2 humans picking 2 different colors could be describing the same object. Thus Light Red->Red should be 100%, Most of the shades of grey will be 100% to each other, etc but red-> green is definitely not a match.

To get a decent look at how the algorithms were working, I plotted grayscale and 3 intensities of each hue against every other color in the set and indicated no match (0%) with black, visually identical (100%) with white and grayscale to indicate the intermediate values.

My first (very simplistic approach) was to simply treat the RGB values as co-ordinates in the colour cube and work out the distance (magnitude of the vector) between them.

This threw out a number of problems with regards to Black->50% Grey being a larger distance than (say) Black->50% Blue. having run hundreds of comparisons and asked for feedback, this doesn't seem to match human perception (shown below) 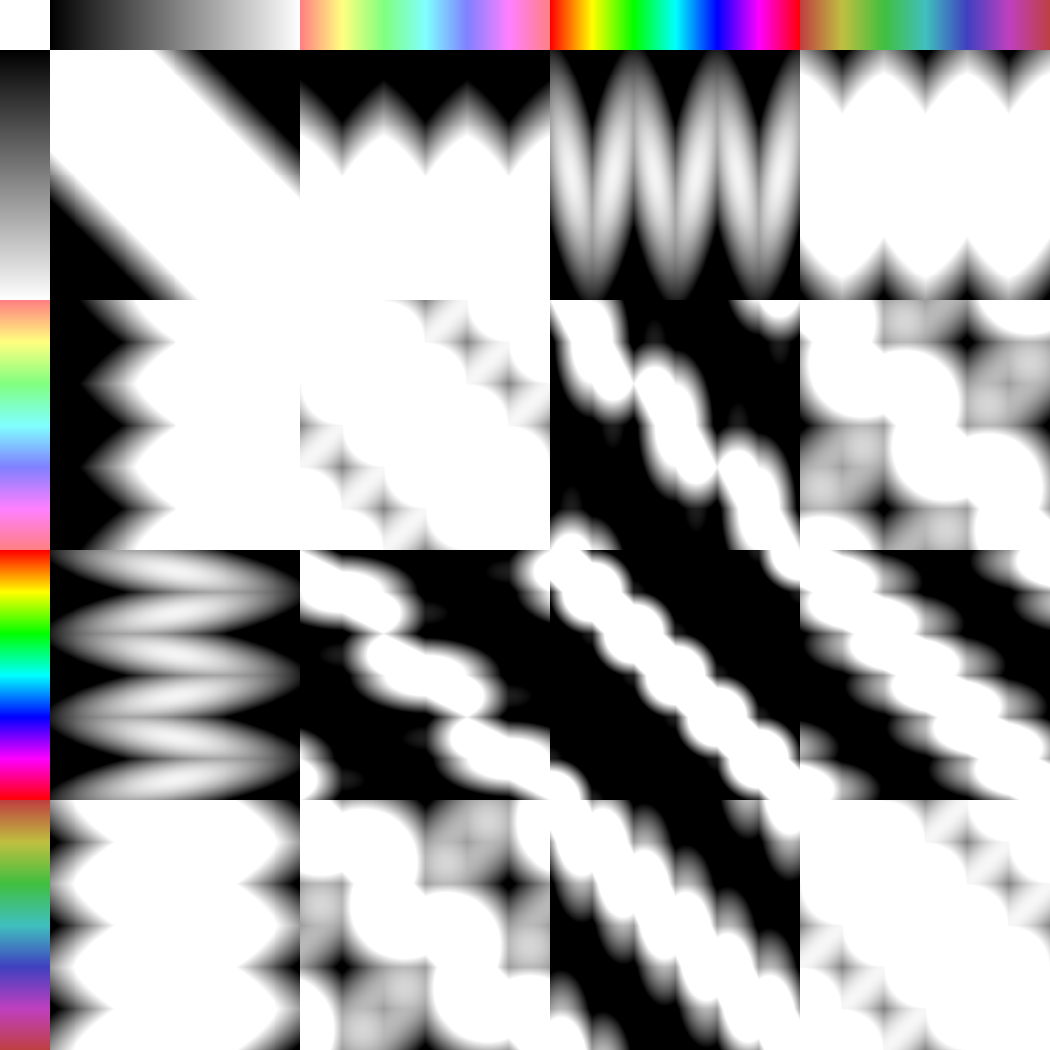 Method 2 converted the RGB values into HSV. I then generated a score based 80% on hue with the other 20% on Sat/Lum. This seems to be the best method so far but still throws some odd matches 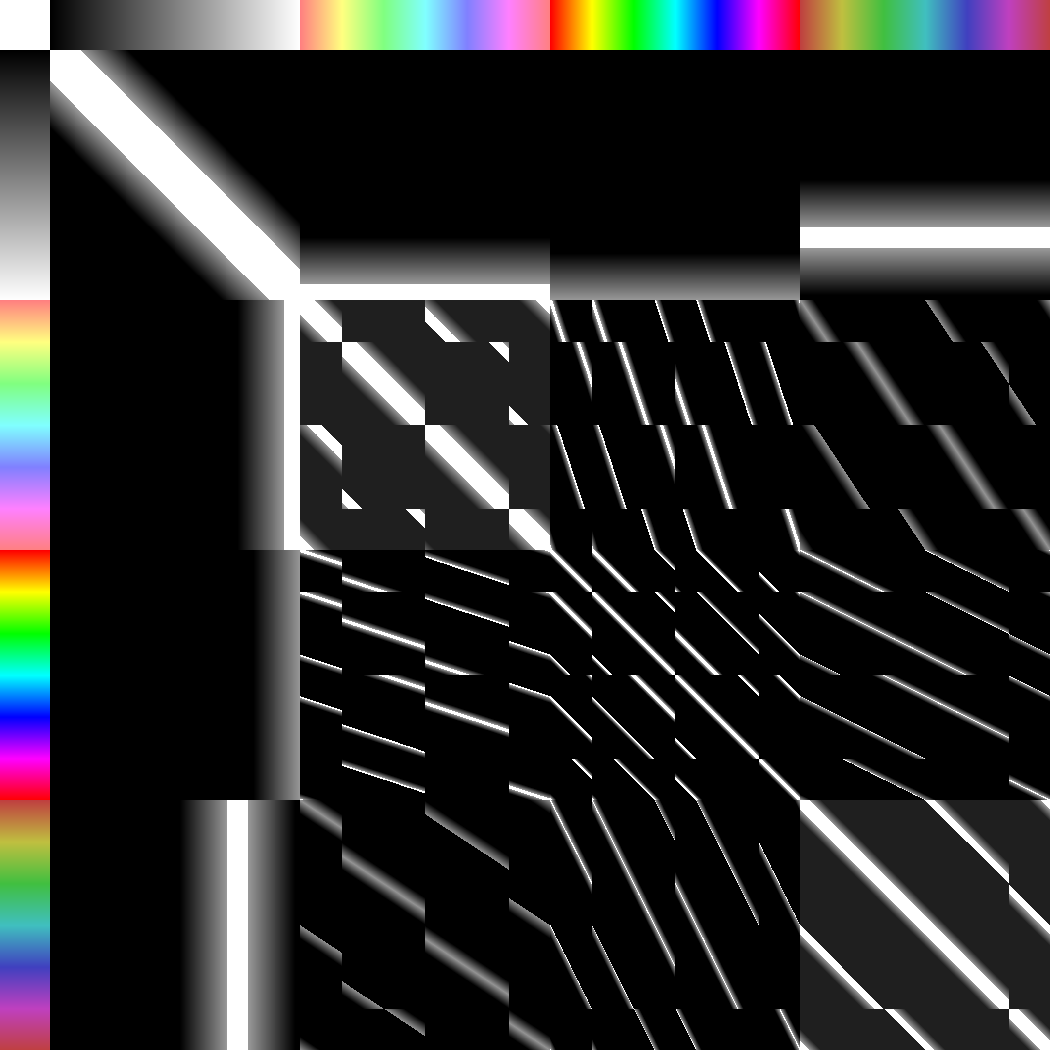 Method 3 was an attempt at a hybrid - HSL Values were calculated but the final score was based upon the distance between the 2 colors in the HSL color cylinder space (as in 3D polar co-ordinates). 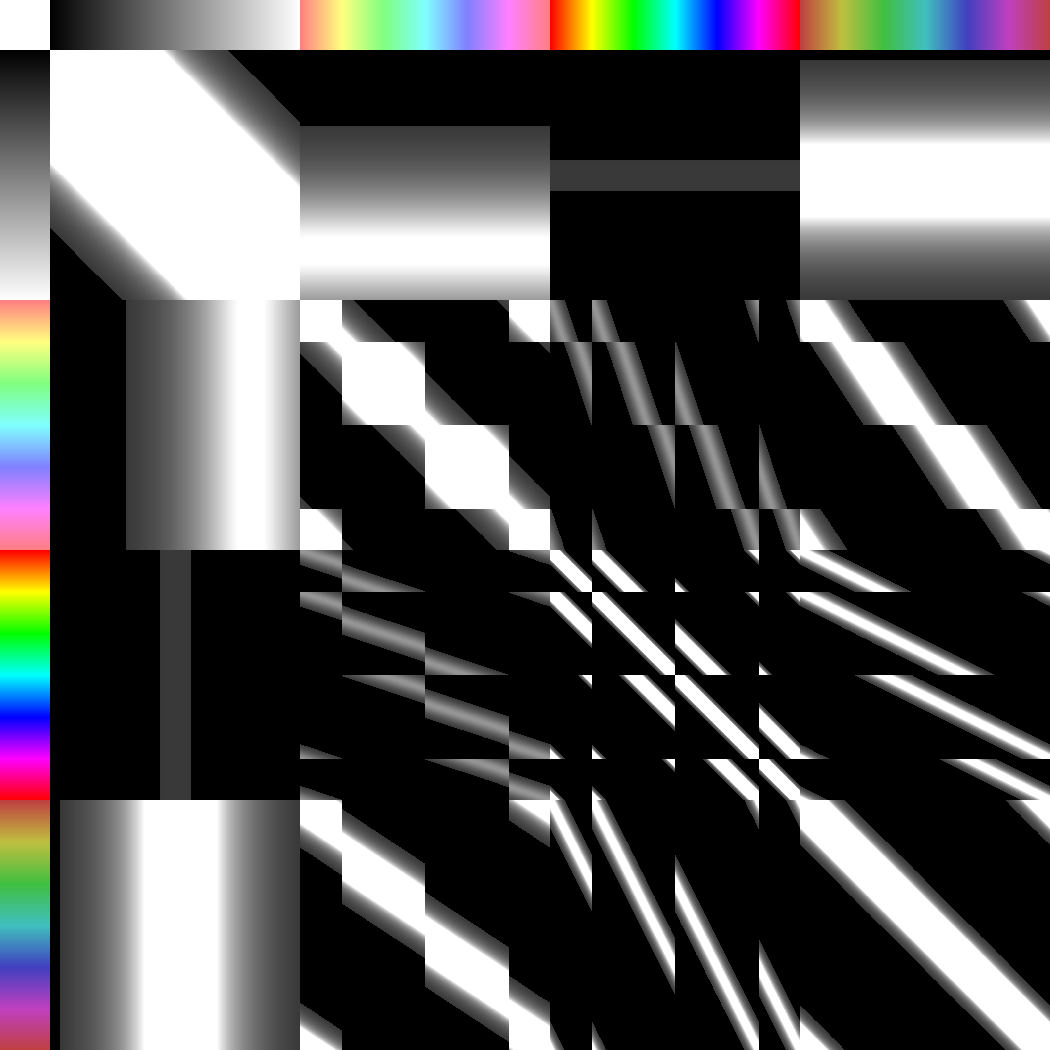 I feel like I must be re-inventing the wheel - surely this has been done before? I can't find any decent examples on Google and as you can see my approach leaves something to be desired.

So, my question is:

Is there a standard way to do this? If so, how? If not, can anyone suggest a way to improve my approach? I can provide code snippets if required but be warned it's currently messy as hell due to 3 days of tweaking.

Solution (Delta E 2000): Using the suggestions provided below, I've implemented a Delta E 2000 comparer. I've had to tweak the weighting values to be quite large - I'm not looking for colors which are imperceptibly different but which are not hugely different. In case anyone's interested, the resulting plot is below... 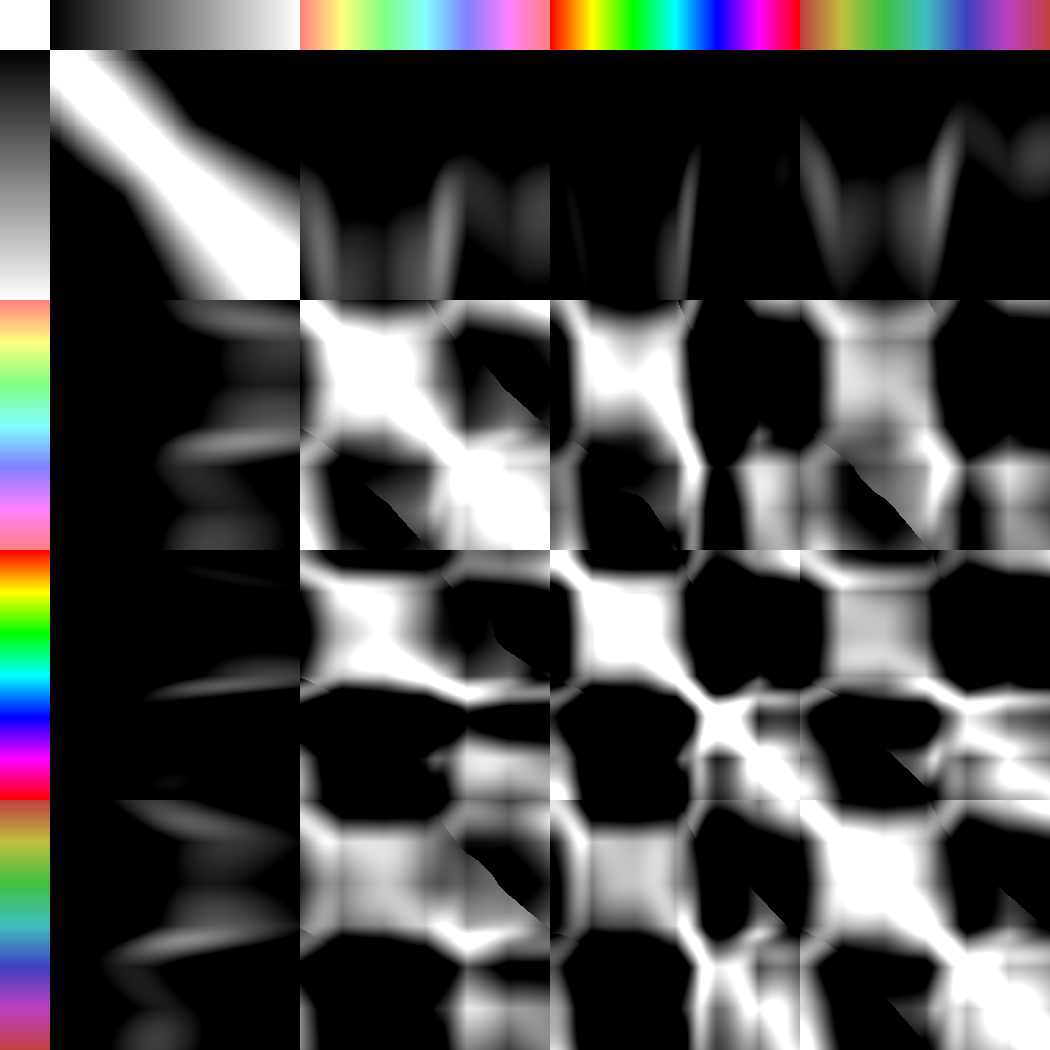 There are a half dozen or so possibilities. EasyRGB has a page devoted to them. Of those listed, DeltaE 2000 probably has the best correlation with human perception -- and is also extremely complex to compute. Delta CMC is almost as good for something like half the code (though the computation still isn't entirely trivial).

I'm not 100% clear on how your problem is set up, but you may want to read up on: Normalized Cross Correlation, and Lab and CIEXYZ color spaces.

This sounds like a prime example for a neural net based approach (if you are in an experimenting mode :) because it's about creating a decision rule that mimics Human perception. A neural net that has six inputs (r, r', g, g', b, b') and one output (is_similar) can be easily trained by using e.g. your own perception of similarity as the training source!

Not the answer you're looking for? Browse other questions tagged algorithm .net-4.0 colors comparison or ask your own question.

52
Followup: Finding an accurate "distance" between colors
3
Nice fade from red to green?
3
Algorithm to generate colors that can easily be read on a white font?
3
Methods for quantifying the similarity between two colours?

949
Big O, how do you calculate/approximate it?
1079
Calculate distance between two latitude-longitude points? (Haversine formula)
144
Generate colors between red and green for a power meter?
146
Converting RGB to grayscale/intensity
1824
Image Processing: Algorithm Improvement for 'Coca-Cola Can' Recognition
6
Calculate the apparent difference in color between two HSI color values
1
How to measure difference between RGB colors taking into account human perception
0
Python make a hue color cycle