Vue UI is not working through docker-compose

I'm trying to get a docker ready VUE application setup and ready to go using the UI tool the vue framework supplies; (the command vue ui will start the UI which is then accessed via the web browser).

I was able to get a project setup successfully but only by using the command line method using vue create app-name-here and going through the prompts. Below is an image of it working that way. 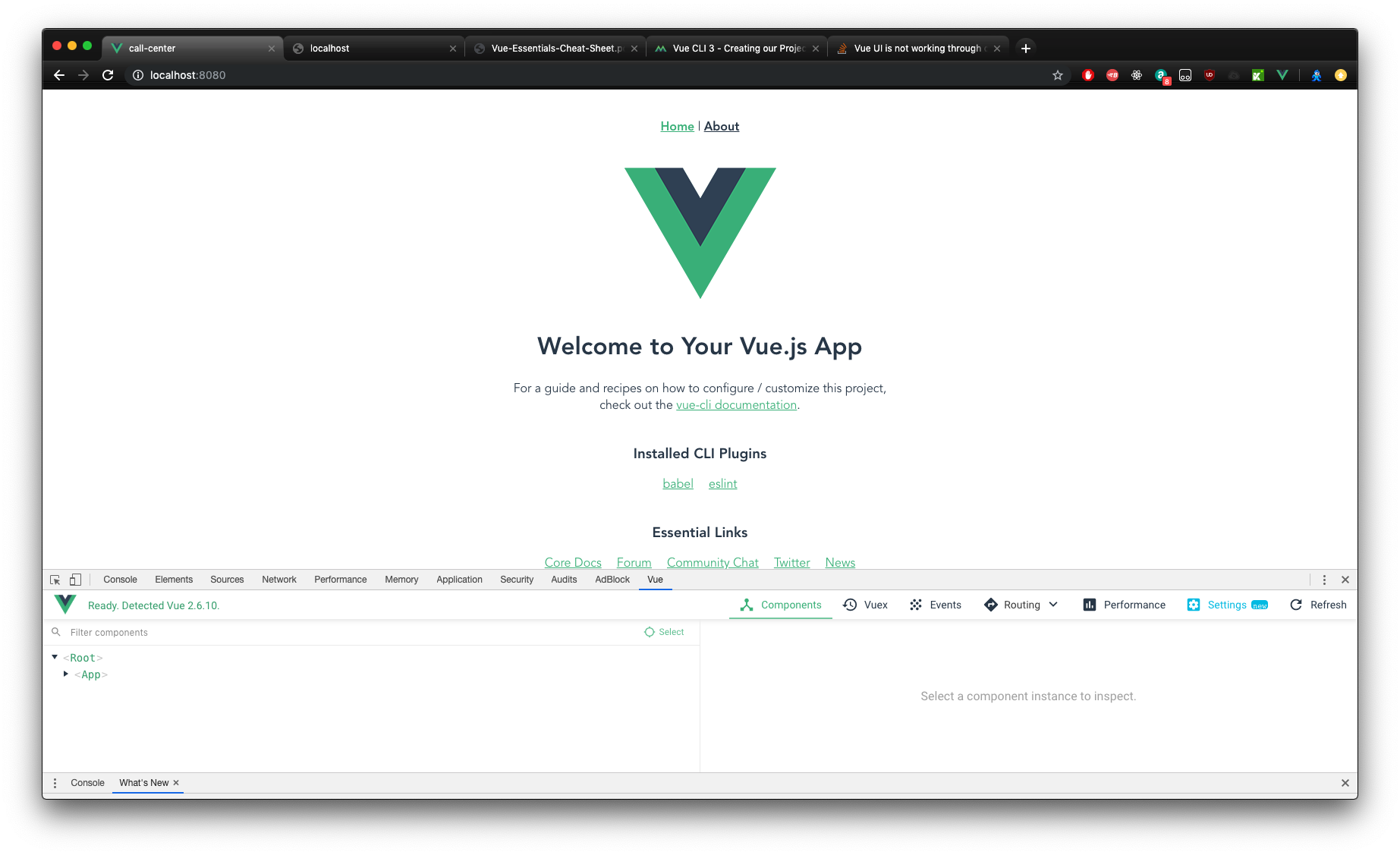 I wanted to use the VueUI so I could follow along on some learning tutorials regarding this and to explore it's features but for some reason I can't seem to get it to work.

As you can see in the images I uploaded below it says it's ready on port :8000 and the docker-compose file is indeed set to be open on the port 8000 and also confirmed via docker ps command as seen below. 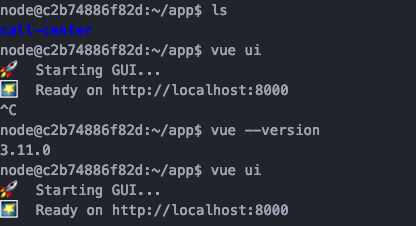 I can also verify that port 8000 is not being used by another process on my main computer (lsof -i tcp:8000). This command just shows that only docker is using it as it should.

As you can see I have done everything in my power to ensure the port is open but when I go to the web browser to see the UI all I see is it can't be found, which is strange because the default project works just fine. 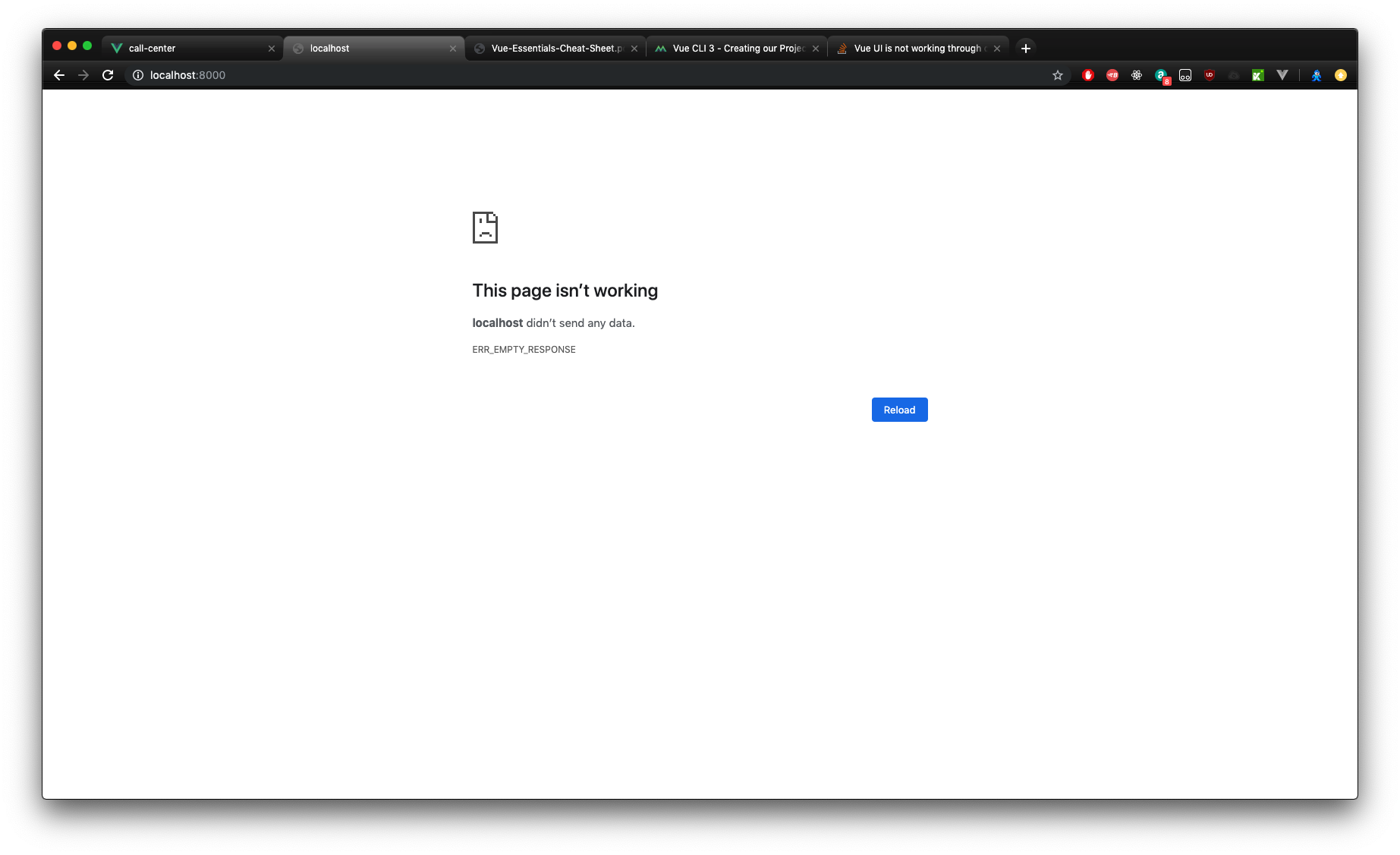 How can I get the Vue UI to work through docker like this?

I start the vue ui server after I run docker-compose by executing into the container like this.

from there I can simply run vue ui, which is what you see in the screenshots above.

I got this to work on my normal host and noticed it was 8001 as the port, so I tried this port instead, still didn't work though.

When I executed into the container I tried vue ui --port 8001 to ensure it was on that port and still no luck even after ensuring it was open.

I did notice that on my mac it tries to load the browser up. In a docker container this is not possible. It also tries to get access to the files, so I'm not sure if this has something to do with it not working or not. I will be investigating further...

Okay so I finally figured out what the issue was. After typing vue ui --help I looked at a list of options.

I experimented with starting the command this way and discovered that you want to run in headless mode and in particular the host has to be 0.0.0.0. By default it was localhost which does not work with docker!

I hope this helps someone else trying to use the UI in Docker!

Not the answer you're looking for? Browse other questions tagged docker vue.js docker-compose or ask your own question.

4190
How is Docker different from a virtual machine?
469
Exposing a port on a live Docker container
2472
Docker: Copying files from Docker container to host
2169
How to copy files from host to Docker container?
1923
How to copy Docker images from one host to another without using a repository
2599
From inside of a Docker container, how do I connect to the localhost of the machine?
819
Using Docker-Compose, how to execute multiple commands
3
Docker link container as build argument
819
What is the difference between docker-compose ports vs expose