How to properly structure internal scripts in a Python project?

In this case foo holds the main project files, for example

And scripts holds auxiliary scripts that need to import files from foo, which are then invoked via:

There are two ways of importing Foo which both fail:

My current workaround is to append the running path to sys.path:

But this feels like a hack, and has to be added to every new script in scripts/.

Is there a better way to structure scripts in such projects?

There's two ways you could resolve this.

(1) Turn your project into an installable package

Add a proj/setup.py file with the following contents:

inside the virtualenv, foo behaves as an installed package and is importable via import foo.

So you can use absolute imports in your scripts.

To make them run from anywhere, without needing to activate the virtualenv, you can then specify the path as a shebang.

In scripts/run.py (the first line is important):

(2) Make the scripts part of the foo package

Instead of a separate subdirectory scripts, make a subpackage. In proj/foo/commands/run.py:

Then execute the script from the top-level proj/ directory with:

If you combine this with (1) and install your package, you can then run python -m foo.commands.run from anywhere.

There are multiple ways to achieve this. Both require creating a python package by adding a setup.py (building on @matejcik's answer).

Option 1 (recommended): entry_point + console_scripts register a function in your project as the entry point to script execution (ie: proj:foo:cli:run).

Option 2: scripts: Use this keyword argument in the setup() method to reference the path to your script (ie: `bin/script.py).

I recommend using a CLI library/framework like Click so that your codebase is only concerned with maintaining application specific business logic rather than CLI robust framework feature logic. Also, click recommends using entry_point + console_scripts method of script integration due to cross-platform compatibility.

Best practice? Put a single entry-point in the root

I know this might sound absurd, if you have lots of scripts you want to be able to execute... But it's actually the cleanest option and it's the one that is most often used in big Python projects like magage.py in Django, for example. It also doesn't need to be a huge undertaking. Even more importantly, it is always more secure to have a single entry point than several smaller ones.

When run.py lives in the root directory, it can be very lightweight... Basically just a wrapper to call the function you need from my_scripts.py. It just ties everything together so now all of your imports just work.

But how do I call multiple scripts!?

If you need to be able to call multiple scripts, this is a good argument for... Well... arguments! Keep run.py as your single entrypoint/command, and leverage subcommands to pass functionality to the script you care about.

Generally, frameworks have already done the architecture for you to add your own subcommands, such as Django and, for a smaller footprint, Flask.

You can easily wrap up a small project without that help, though, as I've illustrated.

No one ever wishes their code was less refactorable after a few years of working with it. No one ever wishes their codebase has less security. As we drive to more secure systems in general, it would make sense to create some gatekeeper script that determines what is and isn’t a safe operation and by whom. Moving the code to an LDAP based system, and need to lock things down by group? No problem. You can either change the single file or add LDAP security in your codebase, even creating your own internal API.

With distributed scripts, security options are much less flexible and much harder to maintain, and a single vulnerability could leave you wide open to exploit.

Bonus advantage You're adding abstraction to your script base. If you ever want to change the structure of your codebase (maybe you want scripts to have subfolders with more organization), you/your users don't need to do any refactoring for any dependencies, or change paths to longer, more verbose names. Your package is self-contained, and the only thing a user will ever need to touch is your proj/run.py entry-point.

And, obviously, you don't need to play with Python paths as much!

You need to add __init__.py files to scripts and to proj folders for those to be considered Python packages and for you to be able to import from those.

One way this is also commonly done, is to place your foo and scripts folders into a proj/src folder, which then has a __init__.py file, and thus is a Python package.

If you like simplicity, and there are no additional restrictions on what you asked, add one __init__.py to the scripts folder, and to any other sibling folders, making them packages, then always use the absolute import form, as you said you do not want proj as a parent package of those and so there is no __init__.py there, and then call your scripts (instead) from inside the proj folder with:

or whatever name you give to other scripts other than run.py

This is similar to option 2 of @matejcik answer, but even simpler.

another solution is you add a.pth file on your Python directory 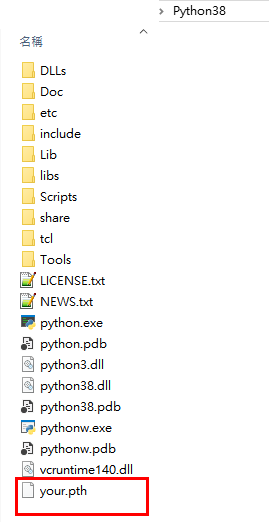 It will work well.

.. note:: If your IDE is PyCharm, then you can use the Source roots to help you too.

Python looks for packages/modules in the directories listed in sys.path. There are several ways of ensuring that your directories of interest, in this case proj, is one of those directories:

Option 1 is the most logical and requires no source changes. If you are afraid that might break something, you can perhaps make scripts a symbolic link pointing back to proj?

If you are unwilling to do that, then ...

You may consider it a hack, but I would recommend that you do modify your scripts to update sys.path at runtime. But instead append an absolute path so that the scripts can be executed regardless of what the current directory is. In your case, directory proj is the parent directory of directory scripts, where the scripts reside, so:

Not the answer you're looking for? Browse other questions tagged python python-3.x pythonpath or ask your own question.

1
ModuleNotFoundError: No module named 'code.victim'; 'code' is not a package