What haskell topics need to be addressed in a Real-World-Haskell style?

It has been quite some time now that RWH came out (almost 3 years). I was eager to get my copy after following the incremental writing of the book online (which is, I think, one of the best ways to write a book.) What a rewarding read in the midst of all the rather academic papers a haskell student usually encounters!

It was a sturdy companion on quite some trips and I refer back to it regularly. Still, my copy started to look pretty battered and even though most of the content is still valid, there has been an abundance of new topics in the haskell world that would be worth covering in a similar fashion. 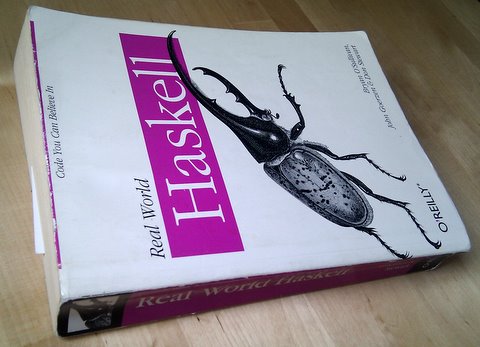 Considering the impact RWH had (and still has,) I sincerely hope that there will be a sequel some day :) Some of the topics for a sequel that would immediately come to my mind:

What are the topics that the haskell community needs a RWH-style explanation for?

this is a summary of the suggestions so far:

Here's my take, biased towards the ecosystem.

I would love to see:

The "More on..." might be better placed in a "Haskell Cookbook" though.

These are less "real worldy", but I'd like to see helpful introductions (and possible Real World applications?) to

I've been meaning to ask this exact same question! I would buy RWH vol2 if it contained the items in the list so far. I would also like to real world examples for (in no particular order)

I would love to see an "RWH approach" to functional reactive programming - a RWH version of this, maybe covering Yampa or something similar. But maybe this topic is not quite "real-worldy" enough (yet)...

However, I would have to agree with Alexander in the sense I would love to see a "Haskell Cookbook" as well as a new more updated version of RWH (As I have yet to finish this is not as important personally for me!).

Advice and sample codes to do with Dates, Generating Random Numbers and the most efficient codes to perform key algorithms (Sorting etc.) would be a great addition to any such book!

Not the answer you're looking for? Browse other questions tagged haskell or ask your own question.

109
Which parts of Real World Haskell are now obsolete or considered bad practice?

284
What does the exclamation mark mean in a Haskell declaration?
145
What is “lifting” in Haskell?
344
What does the `forall` keyword in Haskell/GHC do?
222
What is the Haskell response to Node.js?
160
Real-world applications of zygohistomorphic prepromorphisms
109
Which parts of Real World Haskell are now obsolete or considered bad practice?