I'm doing a POC for a Java project in an AzureDevops CI/CD pipeline. I created a Maven project that has Selenium tests (TestNG) that run against a demo website which is independent of my project. I want to run unit tests in the build pipeline and UI Selenium tests in the release pipeline.

The Visual Studio test task seems to be the building block that I need. I think you can differentiate between unit tests & UI tests using the 'Test files' field like **\unit*Test.dll, **\ui*Test. Unfortunately, this task is not available/compatible for Java projects.

I was able to run the Selenium tests with the Maven task and Surefire plugin during build but remember, I only want to run unit tests during build.

I actually was able to run the Selenium tests in the release pipeline via a workaround which was:

Normally, you would only copy artifacts to the artifact directory so I think doing that is a huge hack.

Another problem is that Maven will build the project during build and release which is wasteful. To dial back the waste, some savvy Maven configuration might help. I was thinking about skipping compilation and resolve dependencies during release, but I don't know where to find the Maven dependencies in the DevOps ecosystem.

Am I missing something or is AzureDevops maybe not supporting Java all that well?

Below steps is just for reference(in classic view). Help it can be of some hope.

1, Add copy file task in the build pipeline to copy the all test files and all the dependent setting files to the test folder in artifacts. 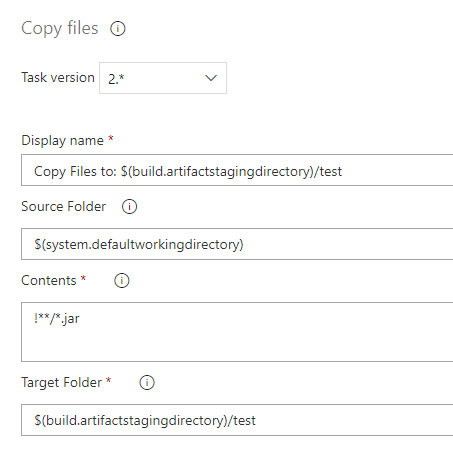 3, In the release pipeline, add the task to execute the tests just like the way you do in build pipeline

Not the answer you're looking for? Browse other questions tagged java maven selenium testng azure-pipelines-release-pipeline or ask your own question.