How does the CPU do subtraction?

I have some basic doubts, but every time I sit to try my hands at interview questions, these questions and my doubts pop up.

Now when in C++ program, I want to print A + B, does the addition module of the ALU (Arithmetic Logic Unit) first check for sign bit and then decide to do subtraction and then follow the procedure of subtraction. How subtraction is done will be my next question.

to do A - B. How does the computer do in this case?

The whole reason we use 2's-complement is that addition is the same whether the numbers are positive or negative - there are no special cases to consider, like there are with 1's-complement or signed-magnitude representations.

So to find A-B, we can just negate B and add; that is, we find A + (-B), and because we're using 2's-complement, we don't worry if (-B) is positive or negative, because the addition-algorithm works the same either way.

Think in terms of two or three bits and then understand that these things scale up to 32 or 64 or howevermany bits.

In order to do this we are going to have some "Carry the one's" going on.

The point being though to notice that to add two numbers I actually needed three rows, for at least some of it I might need to be able to add three numbers. Same thing with an adder in an alu, each column or bit lane, single bit adder, needs to be able to add two inputs plus a carry in bit, and the output is a one bit result and a one bit carry.

And the answer is 3 as expected, not really surprising but we had a carry out. And since this was an add with a minus number in twos complement it all worked, there was no if sign bit then, twos complement makes it so we dont care just feed the adder the two operands.

Now if you want to make a subtle difference, what if you want to subtract 2 from 5, you select the subtract instruction not add. Well we all learned that negating in twos complement means invert and add one. And we saw above that a two input adder really needs a third input for carry in so that it can be cascaded to however wide the adder needs to be. So instead of doing two add operations, invert and add 1 being the first add the real add all we have to do is invert and set the carry in:

Understand that there is no subtract logic, it adds the negative of whatever you feed it.

And what do you know we get the same answer...It doesnt matter what the actual values are for either of the operands. if it is an add operation you put a zero on the carry in bit and feed it to the adder. If it is a subtract operation you invert the second operand and put a one on the carry in and feed it to the same adder. Whatever falls out falls out. If your logic has enough bits to hold the result then it all works, if you do not have enough room then you overflow.

There are two kinds of overflow, unsigned, and signed. Unsigned is simple it is the carry bit. Signed overflow has to do with comparing the carry in bit on the msbit column with the carry out bit for that column. For our math above you see that the carry and carry out of that msbit column is the same, both are a one. And we happen to know by inspection that a 4 bit system has enough room to properly represent the numbers +5, -2, and +3. A 4 bit system can represent the numbers +7 down to -8. So if you were to add 5 and 5 or -6 and -3 you would get a signed overflow.

Understand that the SAME addition logic is used for signed and unsigned math, it is up to your code not the logic to virtually define if those bits were considered twos complement signed or unsigned.

You are a bit wrong in the sign bit part. It's not just a sign bit - every negative number is converted to 2's complement. If you write:

The compiler when compiling it to binary will make it:

Now when it wants to add 5, the ALU gets 2 numbers and adds them, a simple addition.

When the ALU gets a command to subtract it is given 2 numbers - it makes a NOT to every bit of the second number and makes a simple addition and adds 1 more (because 2's complement is NOT to every bit +1).

The basic thing here to remember is that 2's complement was selected for exactly the purpose of not having to make 2 separate procedures for 2+3 and for 2+(-3).

There's a trick to inefficiently increment and decrement using just nots and negations. For example if you start with the number 0 in a register and perform:

Or as another 2 formulas:

No, in one's and two's complement there's no differentiation between adding/subtracting a positive or negative number. The ALU works the same for any combination of positive and negative values

So the ALU is basically doing A + (-B) for A - B, but it doesn't need a separate negation step. Designers use a clever trick to make adders do both add and sub in the same cycle length by adding only a muxer and a NOT gate along with the new input Binvert in order to conditionally invert the second input. Here's a simple ALU example which can do AND/OR/ADD/SUB 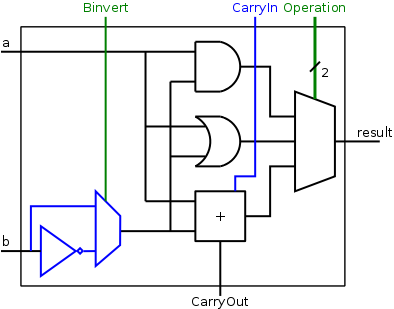 The real adder is just a box with the plus sign inside ⊞ which adds a with b or ~b and carry in, producing the sum and carry out. It works by realizing that in two's complement -b = ~b + 1, so a - b = a + ~b + 1. That means we just need to set the carry in to 1 (or negate the carry in for borrow in) and invert the second input (i.e. b). This type of ALU can be found in various computer architecture books like 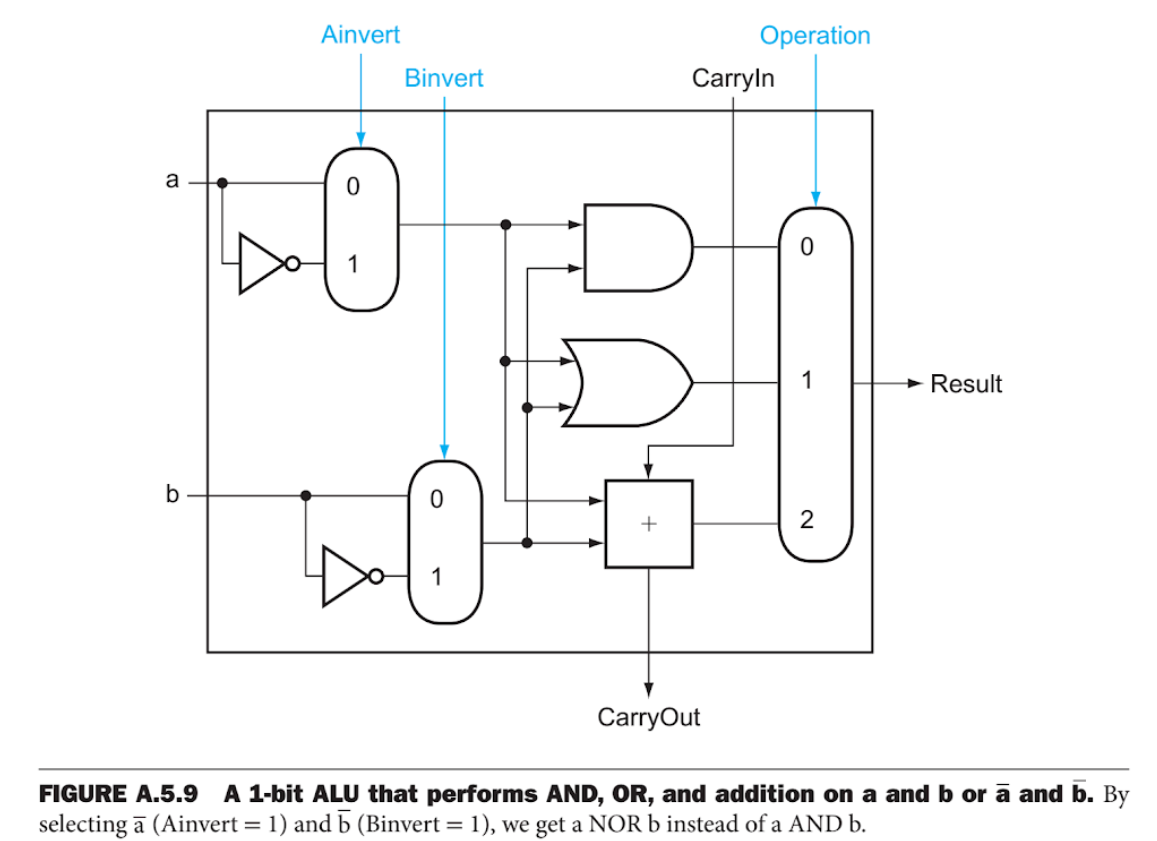 With some simple simple modification to the above ALU they can now do 6 different operations: ADD, SUB, SLT, AND, OR, NOR 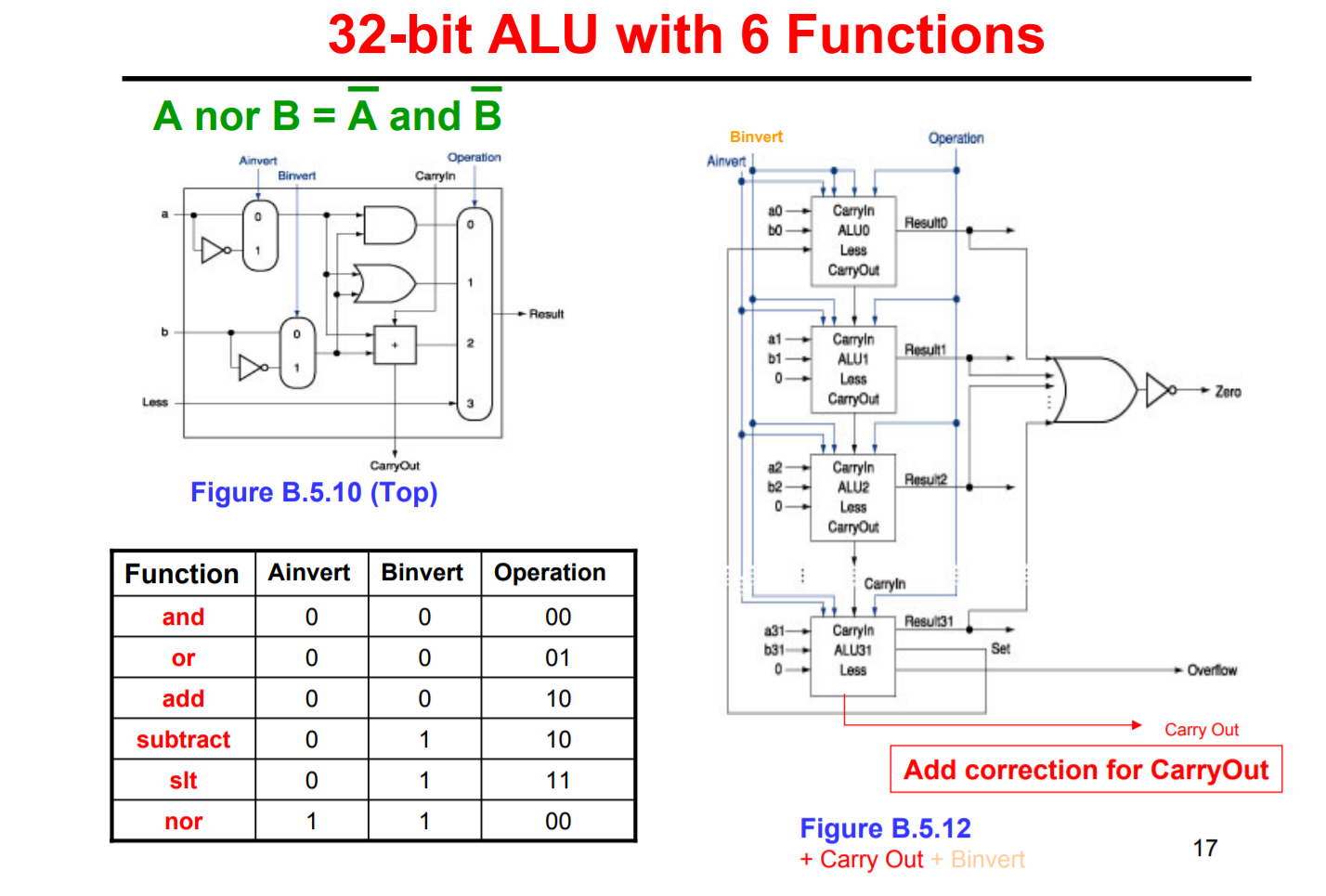 Multiple-bit operations are done by concatenating multiple single-bit ALUs above. In reality ALUs are able to do a lot more operations but they're made to save space with the similar principle

Not the answer you're looking for?Browse other questions tagged math cpu hardware subtraction alu or ask your own question.

0
How does a CPU register know it's content is in 2's complement mode (negative) or positive
7
What is the difference between subtracting `x` and adding `-x` on an x86 machine?
3
int32 storage in memory
0
How to calculate the Auxiliary Flag status in x86 Assembly
1
How does a computer calculate 2 values that are in two's complement exactly?
0
subi opcode for MIPS?
1
Assembly - Carry Flag when negative minus negative

584
How to determine CPU and memory consumption from inside a process?
1135
Easy interview question got harder: given numbers 1..100, find the missing number(s) given exactly k are missing
3
Why is binary subtraction always (?) done by adding the complement?
531
How to obtain the number of CPUs/cores in Linux from the command line?
11
Subtracting a large unsigned binary number from a smaller one
10
How is overflow detected at the binary level?
2
Binary floating point Subtraction
626
Your CPU supports instructions that this TensorFlow binary was not compiled to use: AVX AVX2