The expression of this question is same as What is UEFI's boot sequence?, but it doesn't seem what I want. I'd like to know UEFI sequence in instruction perspective.

For example, in case of BIOS boot mode, in simplified fashion, 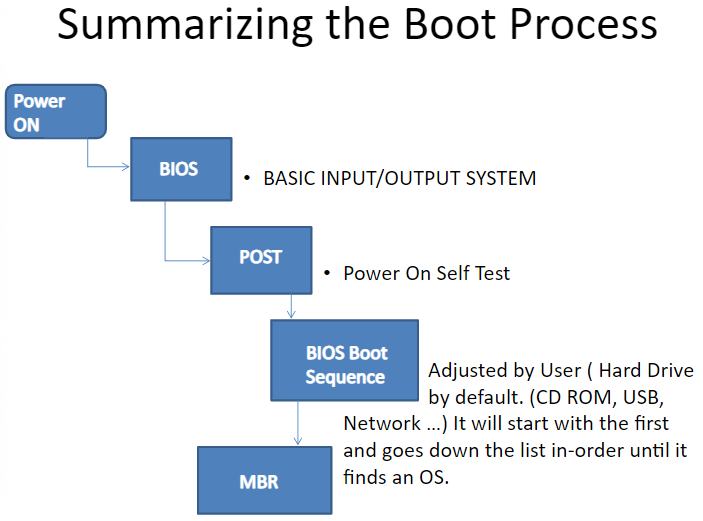 in case of UEFI, I'm having trouble grasping this sequence.

It seems this efi_main() function works as the point equivalent to 0x7C00 in BIOS mode. But how?

after performing a series of jobs?

Q2. Is there a good UEFI example or tutorial like brokenthorn that of BIOS based?

I've seen the news (which years have passed already) that Intel removes BIOS support by 2020.

Once CSM is removed, the new platforms will be unable to run 32-bit operating systems, unable to use related software (at least natively), and unable to use older hardware, such as RAID HBAs (and therefore older hard drives that are connected to those HBAs), network cards, and even graphics cards that lack UEFI-compatible vBIOS (launched before 2012 – 2013)

Q3. Doesn't it mean that everything related to BIOS booting (first stage bootloader at 0x7C00 and BIOS interrupts and etc) becomes deprecated?

The UEFI boot sequence is devided in multiple "phases", you can find some basic information about each phase here.

To load the SEC phase, the SecCore is located at memory address 0xFFFFFFF0 (this address is mapped to the UEFI Flash Memory) and therefore is the target of the reset vector.

After the dxe phase multiple UEFI Applications can be called before the operating system is loaded.

If you want to get a basic understanding of how UEFI works i would recommend the book "Beyond BIOS".

If you want to learn how to write UEFI Drivers/Applications i would recommend to have a look at some of the sample applications in the EDK2 repository (and how to build Applications with it), more details can be found in the specification.

Not the answer you're looking for? Browse other questions tagged assembly sequence boot bios uefi or ask your own question.

0
What is UEFI's boot sequence?

12
What information does BIOS load into RAM?
2
bios int 0x13 fails without error
3
Basic boot terms
0
Bios always jumps on first sector (512B) why ? is this some kind of BIOS limitation?
4
Does the BIOS copy the 512-byte bootloader to 0x7c00
3
Simplest chainloading a boot manager
5
BIOS and Address 0x07C00
3
Understanding of boot loader assembly code and memory locations
14
Legacy BIOS bootloader to bootstrap real-mode code in second stage
1
Why is my bootloader not working on recent laptops?