I'm still struggling to understand the difference between ASP.NET Core Hosted and Server-side Blazor. I know same question already exists, but it's not satisfying. In fact, I couldn't find the satisfying answer anywhere - the answers were more or less the same.

If hosted option uses server (IIS, Kestrel), then why server-side? Confusing... It's a shame that official documentation didn't shed the light either...

The confusion stems from the fact that we have THREE options to create Blazor application. After executing dotnew new --list I get:

However, there's a third option:

It's the same as check box in Visual Studio when creating application: 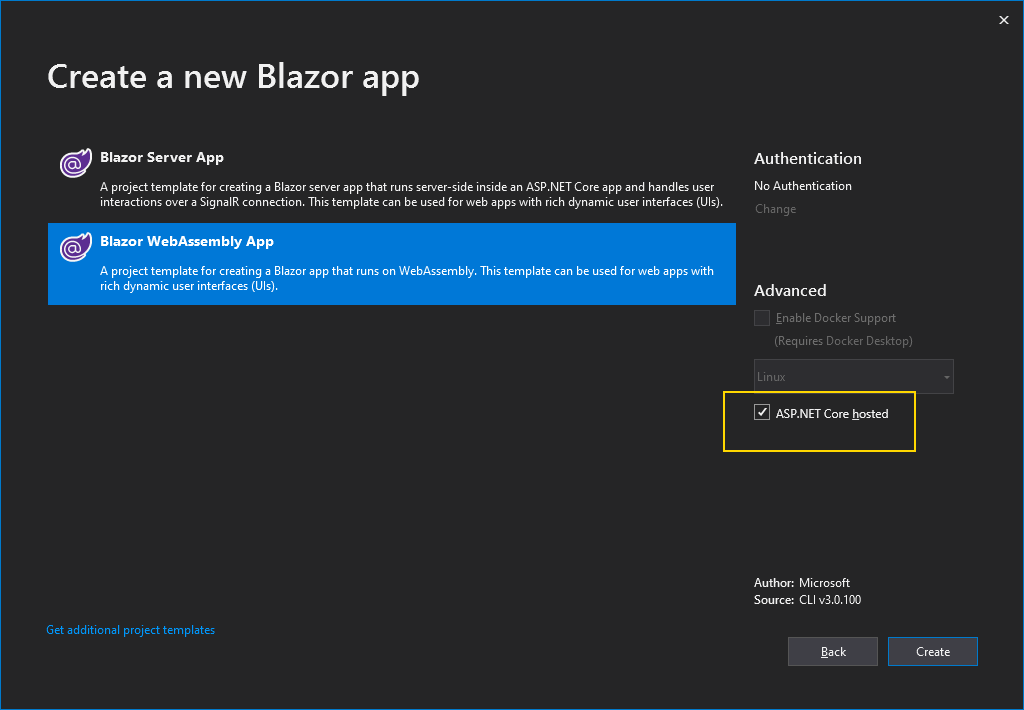 you have the option of configuring the app to use an ASP.NET Core backend by selecting the ASP.NET Core hosted check box

But no explanation was provided what does it mean...

Re this part of your question:

However, there's a third option:

It's the same as check box in Visual Studio when creating application:

you have the option of configuring the app to use an ASP.NET Core backend by selecting the ASP.NET Core hosted check box

But no explanation was provided what does it mean...

'Hosted' is used where you want the back-end of your site and the Blazor client using that back-end to both be hosted on the same website.

I agree, the documentation really isn't terribly clear about all of this, but the explanation is actually simpler than it seems:

The Blazor app has to be 'hosted' somewhere

The first thing to remember is that the Blazor WebAssembly 'app' is not a standalone website, it's an app that's embedded in a website. In a lot of cases it will behave like a website, because it will be used as a Single Page Application, but that is by no means required.

Essentially the Blazor WebAssembly app is a series of files and a JavaScript file that are created by compiling/publishing your Blazor project.

Those files then need to be put on a website somewhere and the combination of the name of a div tag and the Blazor JS file produced for your site deals with wiring your app files into the WebAssembly part of the browser so that it's then rendered on the page.

The key here is that the website 'hosting' your Blazor app does not have to be an ASP.NET Core site. It could be any site, pure HTML, Drupal, whatever, it just needs to be shown on a browser that handles WebAssembly and JavaScript correctly.

However, if you're also writing the backend of your site in ASP.NET Core, you can reuse that site

This scenario is what the 'Hosted' option is for.

If you create a project using the template in the screenshot above, with the 'hosted' option ticked, you'll see that the [YourProjectName].Server project that's created is the Start Up project, but the index.html page that's shown when you run that project has come from the [YourProjectName].Client project.

This approach means you only have one site running on your server (which could be good or bad) and also means you won't run across any CORS issues.

But you don't have to have an ASP.NET Core site at all

If your Blazor site is a standalone site that doesn't read/write from any server, or if it only talks to 3rd party APIs or an existing Web API running on the older .NET Framework, then you don't actually need an ASP.NET Core site at all.

In that case you don't use the 'hosted' option.

Instead, you can simply publish your Blazor project and then take the files from the release folder and host them in any site.

I see where you are coming from now. The confusion stems from the fact that you have an option called --hosted when using the client-hosted Blazor. This options means having Blazor to include ASP.NET Core runtime.

Why this option? Because you can write an offline app (e.g. calculator app) that does not need any kind of connection to external services, making ASP.NET Core irrelevant. However, you might want to write an online app that accesses online DB, external APIs, do verification, etc. For these kind of apps, you will need an ASP.NET Core stack to support your app.

The difference is whether the app is hosted in server, or in client. Server hosting means your app logic runs in the server (you can think of it similar to what Web Forms is), you click on a button, an "Ajax" call sends the request, the server receives the request, and sends back the updated page. However, here it uses SignalR not Ajax, which is a low level socket communication (read efficient). And instead of updating a whole page, it updates only the relevant parts (thus it is a single page application).

On the other hand, client hosting means your logic runs within the browser. Think of it as if your C# logic is converted into JS, and it is embedded in the page. So the logic runs in the browser. This is possible after the introduction of WebAssembly which you might want to read about.

Let's say you want to create a calculator app. Your server hosted app will then need to communicate with the server to calculate and get the result for each calculation, while the client hosted does not need, and calculates the result in browser.

You might wonder, why we have two options. The reason being that support for WebAssembly (which a client hosted app relies on) is either incomplete or non-existant in many browsers, and performance differs widely too.

The question is about the option "ASP.NET Core hosted" in Visual Studio, while creating a new Blazor Project with Blazor WebAssembly App.

Selecting this option scaffolds out 3 Projects for you (vs 1 WebAssembly project, if this option is not selected)

With this option you can have

When deployed, all these projects go to the same location. So if you have a requirement for both Server Side as well as Client side options, then go for it. 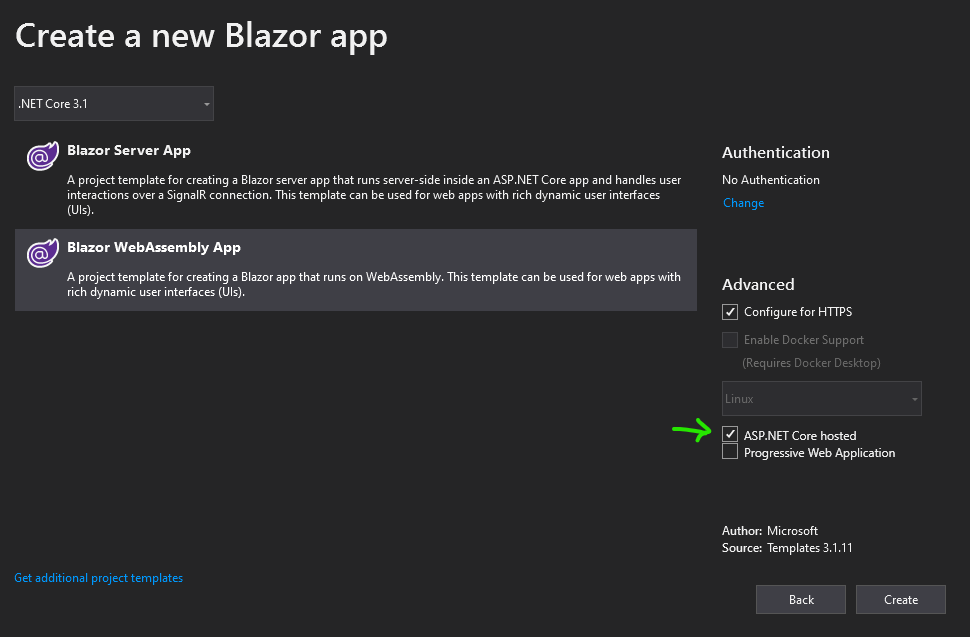 I too had the same confusion while reading the documentation. But it was explained in Blazor webassembly section

dotnet blazorwasm - is a standalone project

A hosted deployment serves the Blazor WebAssembly app to browsers from an ASP.NET Core app that runs on a web server.

The client Blazor WebAssembly app is published into the /bin/Release/{TARGET FRAMEWORK}/publish/wwwroot folder of the server app, along with any other static web assets of the server app. The two apps are deployed together. A web server that is capable of hosting an ASP.NET Core app is required. For a hosted deployment, Visual Studio includes the Blazor WebAssembly App project template (blazorwasm template when using the dotnet new command) with the Hosted option selected (-ho|--hosted when using the dotnet new command).

One big advatage of the blazor asp.net core hosted model is that one that you can use many great things from the server, but still they need to be called via API. Which is totally OK if you are not wiling to use blazor server side or blazor client side without e.g. Identity System.

So Blazor server uses SignalR to communicate between server and client whereas Blazor WASM uses WASM(client-side, no communication after the first load) with backend asp.net core(if --hosted).

So when you want to run the Solution(App), you must ensure to set the Server project as the startup project and not both the server and client. Due to my initial misunderstanding, I was setting multiple startup project, thinking that the client(something like React App) calls the server(WebApi), and that they both should be running simultaneously, for the client to call the server.

The above is correct, but the following is INCORRECT.

If you do that, you get the following error, and this stuck me for quite some time and made me thinking.

And finally if you are thinking to dockarize by adding docker files and docker-compose files for different kinds of Blazor apps, do take a look at this github repo.

Specifically for this kind of apps that we are talking about take a look at this and this folder in that repo.

Not the answer you're looking for? Browse other questions tagged c# asp.net-core blazor or ask your own question.

29
Blazor, ASP.NET Core Hosted vs Server Side in ASP.NET Core
9
Is it possible to embed a Blazor component in a non .NET website?
5
Understanding Blazor Assembly with ASP.net Core Hosted Model
0
A decent clarification between Blazor Server-app, WebAssembly-HostedByDotNetCore and WebAssembly?