Resetting remote to a certain commit

I want to discard all changes done after commit <commit-hash> . So I did:

Now I want to do the same with my remote. How can I do this? I have done some commits (and pushes) after <commit-hash> and I just want to discard them all. Is just something went terribly wrong in the way and I don't want to make it worse than it is already. ;(

I basically want to rewind my origin/master to <commit-hash>

Assuming that your branch is called master both here and remotely, and that your remote is called origin you could do:

However, you should avoid doing this if anyone else is working with your remote repository and has pulled your changes. In that case, it would be better to revert the commits that you don't want, then push as normal.

Update: you've explained below that other people have pulled the changes that you've pushed, so it's better to create a new commit that reverts all of those changes. There's a nice explanation of your options for doing this in this answer from Jakub Narębski. Which one is most convenient depends on how many commits you want to revert, and which method makes most sense to you.

Since from your question it's clear that you have already used git reset --hard to reset your master branch, you may need to start by using git reset --hard ORIG_HEAD to move your branch back to where it was before. (As always with git reset --hard, make sure that git status is clean, that you're on the right branch and that you're aware of git reflog as a tool to recover apparently lost commits.) You should also check that ORIG_HEAD points to the right commit, with git show ORIG_HEAD.

Using some other answers can result in unnecessary loss of local state. Local changes are not inherently required to change a remote. This method can still wreck your remote if you choose the wrong commit to go back to, but even then you can usually find the right commit and try again.

You must have the desired commit somewhere in your local repo that you want the remote to match.

If the forced push fails, it's likely disabled by the remote. This may be worked around by temporarily changing one or both of receive.denyNonFastForwards and receive.denyDeletes. If your remote is hosted on a service without shell access, it probably has settings you can change to allow forced pushes.

I use a convenient alias (git go) for viewing history as in step 2, which can be added like so:

On GitLab, you may have to set your branch to unprotected before doing this. You can do this in [repo] > Settings > Repository > Protected Branches. Then the method from Mark's answer works.

If you want a previous version of file, I would recommend using git checkout.

Doing this will send you back in time, it does not affect the current state of your project, you can come to mainline git checkout mainline

The advantage of this is that it does not delete history, and neither does revert a particular code changes (git revert)

My two cents to the previous answers: if

Let's assume that your branch is called master both locally and remotely, and that your remote is called origin you could do:

git reflog to get all the commit history, your commit hash has format like this: e34e1ff

I faced the same problem recently and it got resolved with two steps:

If your branch is not development or production, the easiest way to achieve this is resetting to a certain commit locally and create a new branch from there. You can use:

(where 000000 is the commit id where you want to go) in your problematic branch and then simply create a new branch:

Then you can create a new PR and all will work fine! 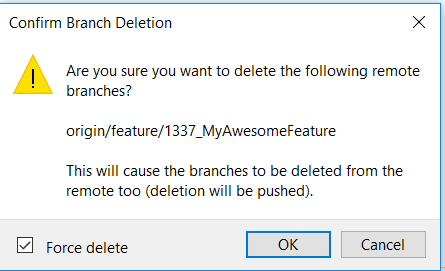 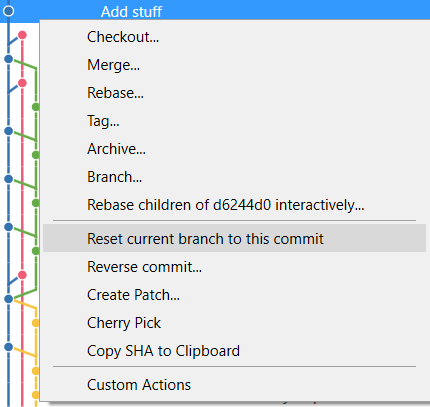 error: failed to push some refs to 'https://github.com/YOURREPOSITORY/AndroidExperiments.git' hint: Updates were rejected because the tip of your current branch is behind hint: its remote counterpart. Integrate the remote changes (e.g. hint: 'git pull ...') before pushing again.**

1
How do I discard changes after resetting a branch?
1
How to merge main to origin/main?
0
git branch origin / head discrepancy
1
Revert to older commit
1371
How can I revert multiple Git commits?
3
New commits are rejected since I removed the last commit
2
error: failed to push some refs to 'git@github.com:<name>/<project>.git'
0
Revert branch pushed on origin with incorrect HEAD
1
Is it possible to maintain a same git project on two different remotes (private and public) with different commit history?
1
Git delete without traces
See more linked questions

7655
How to modify existing, unpushed commit messages?
10474
How do I undo 'git add' before commit?
5944
Move the most recent commit(s) to a new branch with Git
7862
How do I check out a remote Git branch?
4569
Undo a Git merge that hasn't been pushed yet
1935
Make the current Git branch a master branch
7620
How do I revert a Git repository to a previous commit?
1983
Throw away local commits in Git
1694
How can I reconcile detached HEAD with master/origin?
1612
Can I delete a git commit but keep the changes?