After upgrading to Xcode 11.2 from Xcode 11.1, app crashes due to _UITextLayoutView

Why is this happening? How can I prevent this crash?

The ONLY Solution is to update

if you ever try to submit your app that build with Xcode 11.2 to the AppStore, you will be rejected:

So all workarounds done with the Xcode 11.2 is useless

Roll back to previous Xcode release version from: Rollback is not an option anymore and AppStore will reject any build with Xcode below 11.2.1 take a look at this

Note that you should use Safari to download it and you must first login to Apple developer portal.

You can find all other Xcode versions and other resources link (including release and beta versions) here at https://developer.apple.com/download/more

This is very hard but working workaround. Replace all UITextViews in storyboards and Xibs with the pure code version.

Note that this bug is found and fixed by Apple

Also earlier, the bug was confirmed by Apple Staff edford

For those with storyboard:

For those comfortable with method swizzling (Objc and dynamic behavior)

Just don't do it anymore:

Even if these last two swizzling workarounds are not using Apple private API, they will be rejected in AppStore because Apple will not accept builds with Xcode versions under 11.2.1!

The New version of Xcode (11.2.1) is available now which is the best way to get rid off this issue.

@Mojtaba Hosseini the solution I proposed was from the help and the participation from my side to my fellow developers over StackOverflow. You, me and all the rest of the developer here already know that when the new version is announced by Apple, this issue will be gone.

The solution aforementioned was definitely accepted by Apple Review as there is no private API involved at all. This approach is very similar to the creating property like

So when you are creating property you are directly using APPLE Private Components and re-moduling them as per you depends or requirement.

The Simple Example is AMFNetworking classes

Hope I am done with the Allegation

The answer below was just some help from my side to enable developer to continue developing as you we initially proposed developer to roll back Xcode. This was a bad practice to download 8 GB Xcode again since we all know that the new version of Xcode will be released soon.

execute it in the app delegate

Compile the code and you will have a running app :)

EDIT: As the fix is now released, you should switch to that Xcode version and comment out this workaround. As Mojtaba Hosseini in his answer mentioned:

... these last two swizzling workarounds are using Apple private API and will be reject from Apple review!

For the time until the fix was released by Apple, this was a good workaround to continue developing and testing.

For Xcode 11.2, based on the idea of Aftab Muhammed Khan and with the help of John Nimis I just tested the following code.

No change in the storyboard files necessary!

Edited my AppDelegate.swift file and added this class

and within the delegate call for "didFinishLaunchingWithOptions" call the workaround

Call it at the end of didFinishLaunchingWithOptions in AppDelegate.

Add this code somewhere and then replace all storyboard instances to FixedTextView.

Note: you will lose any attributes created in the storyboards. This could have serious implications (e.g. delegate setting, size, etc.)

Refer to apple's documentation This update fixes a critical issue that could cause apps using UITextView to crash.

Old Solution: Downloaded Xcode 11.1 from https://developer.apple.com/download/more/ Switching back from 11.2 to 11.1 fixed the crash.

(and it can be used to publish to App Store)

Improving on @garafajon answer. For me it works in most cases.

As a "quick" fix you can add the UITextView directly from the code and not via IB. At least it worked for me. Though from my point of view it's better to rollback to previous Xcode/wait for the new one.

It is a bug with Xcode 11.2. Subclassed Textviews are crashing on all devices not having the neweset iOS build (13.2) installed. You probably better not build a release with that build.

I used a successful workaround, but it was painful. This is the process that I followed:

Doing this fixed the issue for me with no loss in desired functionality. Fortunately I had only one UITextView to replace. Otherwise, this gets untenable.

After upgrade I have tested the same on iOs 13 and iOS 12 and it was working fine.

There is an issue with Xcode 11.2 wherein Storyboards containing a UITextView will cause the app to crash on OS versions earlier than iOS 13.2 if compiled with Xcode 11.2. 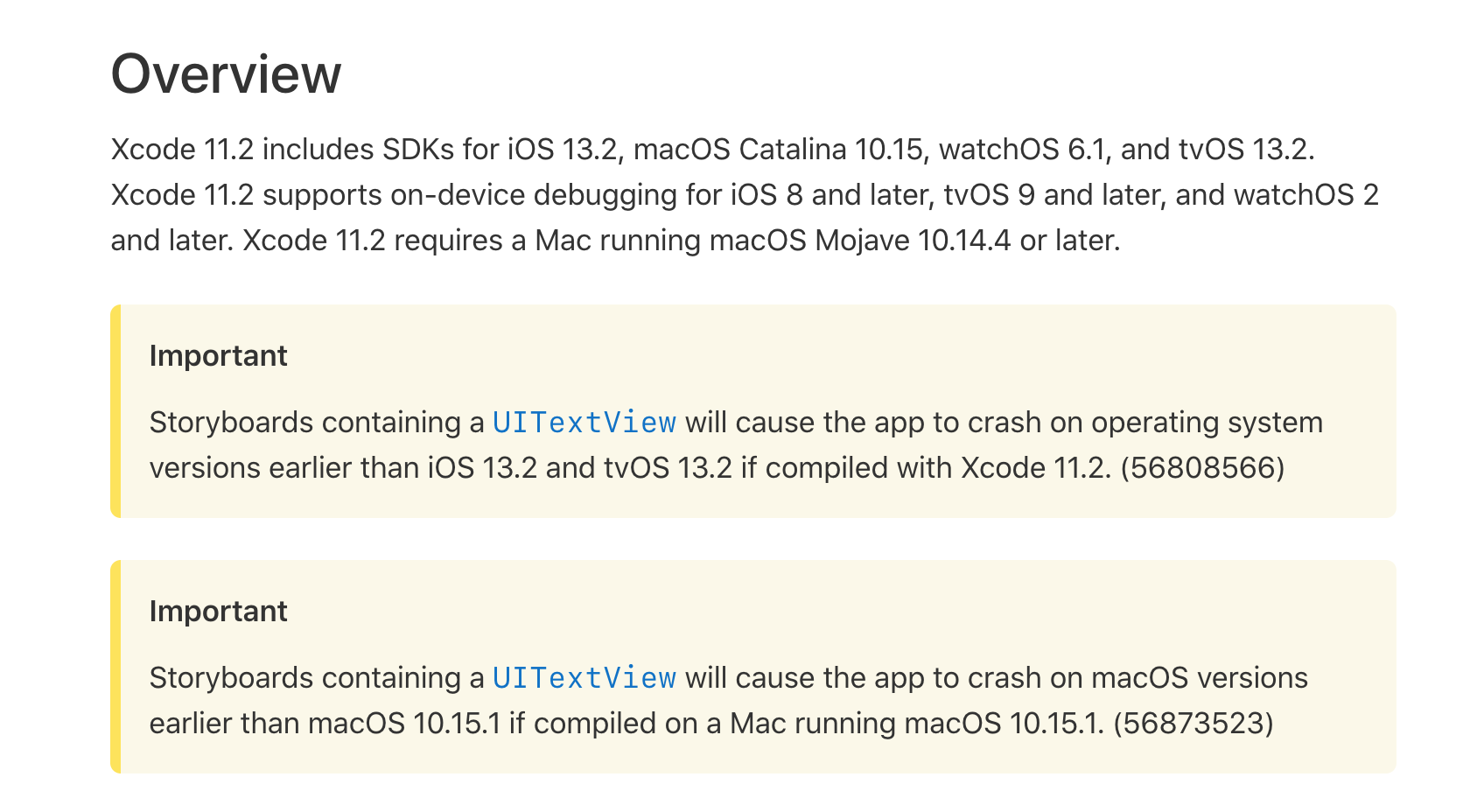 Xcode 11.2.1 was particularly released to fix this crash issue. 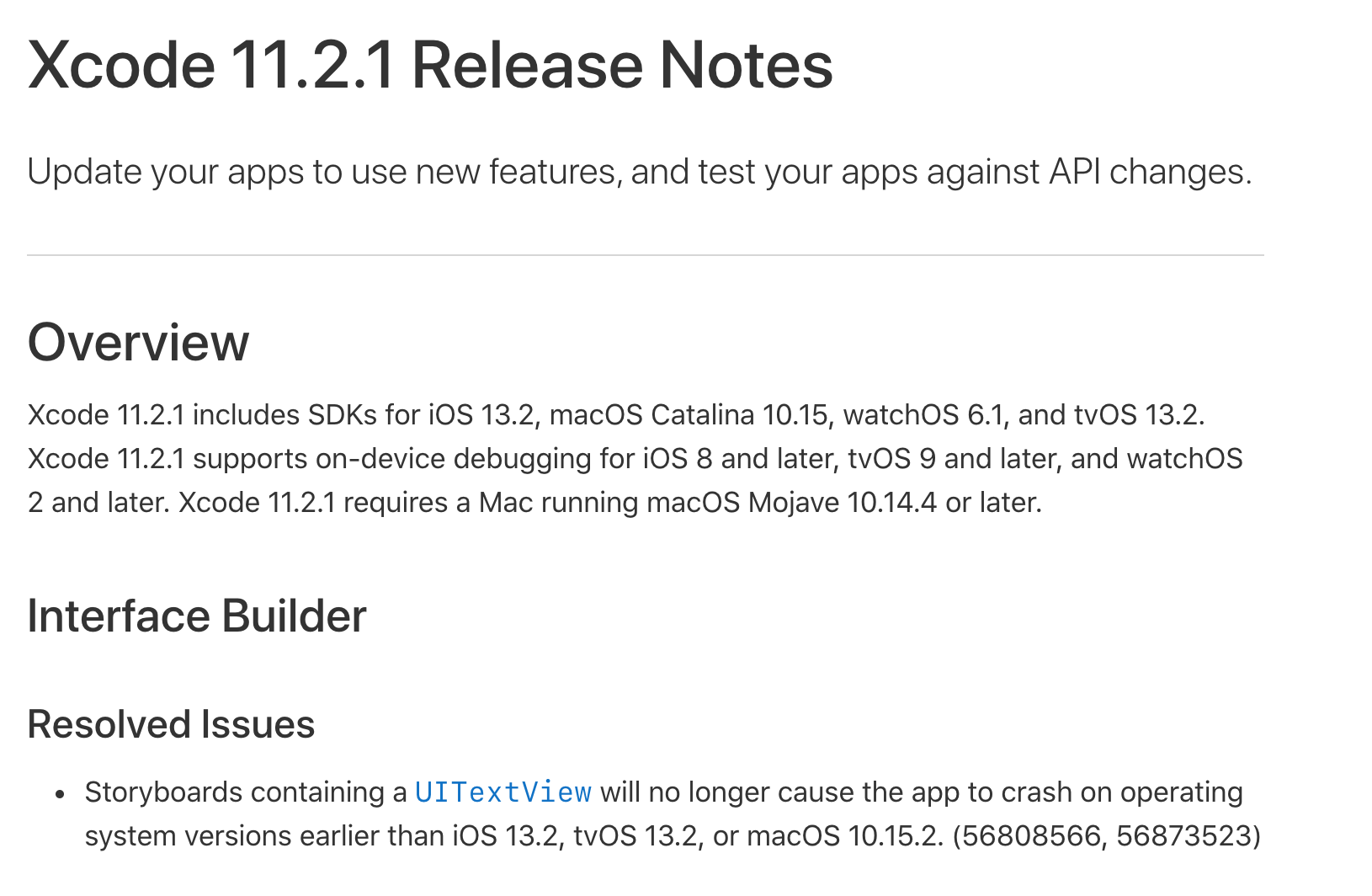 I would suggest you to go with latest version of Xcode 11.3 since this supports developing apps for iOS 13.3 and also there are many new features. Check this apple documentation.

This issue was fixed in Xcode version 11.2.1, and called out in the release notes:

Not the answer you're looking for? Browse other questions tagged ios swift xcode uitextview xcode11.2 or ask your own question.

1280
Xcode - How to fix 'NSUnknownKeyException', reason: … this class is not key value coding-compliant for the key X" error?
166
Could not instantiate class named MKMapView
166
NSInvalidUnarchiveOperationException: Could not instantiate class named NSLayoutConstraint
143
unable to dequeue a cell with identifier Cell - must register a nib or a class for the identifier or connect a prototype cell in a storyboard
76
iOS11 WKWebview crash due to NSInvalidUnarchiveOperationException
1
Running website on app in xcode and getting error "Thread 1: signal SIGABRT"
4
Xcode still cause apps using UITextView to crash even after installing "Xcode Version 11.2.1 (11B500)"
0
Could not find module 'IQKeyboardManagerSwift' for target 'armv7-apple-ios';
0
google-cast for iOS SDK crashes on launch can't find class CADPCastErrorInfo