How to calculate the axis of orientation?

Previously, I calculated the axis of orientation based on anatomical structures, such as the toes in a paw. 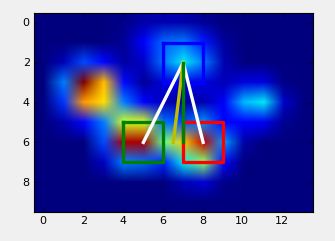 But I found that this doesn't work when I can't distinguish between the toes very well or if the 'heel' (blue square) is way off. So I decided to look for better alternatives and I decided to try and calculate the inertial axis.

This page gives a great explanation of how to calculate it, but I have trouble understanding the steps of getting from the Center of Mass (or pressure in my case) to an angle.

The explanation boils it down to:

which uses the Center of Pressure and a value p, of which I don't know what it is.

I had access to the Matlab code that calculated this axis for human feet and did my best to translate it to Python:

So as far as I understood it, sin(angle) and cos(angle) from RotationMatrix are used to determine the axis. But I don't really understand how to use these values to draw an axis through the paw and rotate it around it.

Any idea what I'm doing wrong and/or what I should do to solve it?

Well, here's an implementation doing the same thing as your code above (and rotating the image by the relevant angle).

However, in the case of your paws, I'm not sure it's going to work as well as it does for a human foot.

However, the fact that a dog's paw is close to circular gives us more problems.

Basically, this probably isn't going to be as useful for dogs as it would be for humans. The rotation of the "long" axis deduced by the covariance matrix of the image formed from the second central moments of the image (which is what (I think) your code above does) is less likely to be an accurate measurement of the orientation of the paw.

In other words, a dog's paw is close to round, and they appear put most of their weight on their toes, so the "back" toe is weighted less heavily than the font in this calculation. Because of that, the axis that we get isn't going to consistently have a relationship to the position of the "back" toe vs. the front toes. (Hopefully that made some sense... I'm a horrible writer... Which is why I'm answering this question rather than working on the paper I should be working on...)

At any rate, enough rambling... Here's an example: 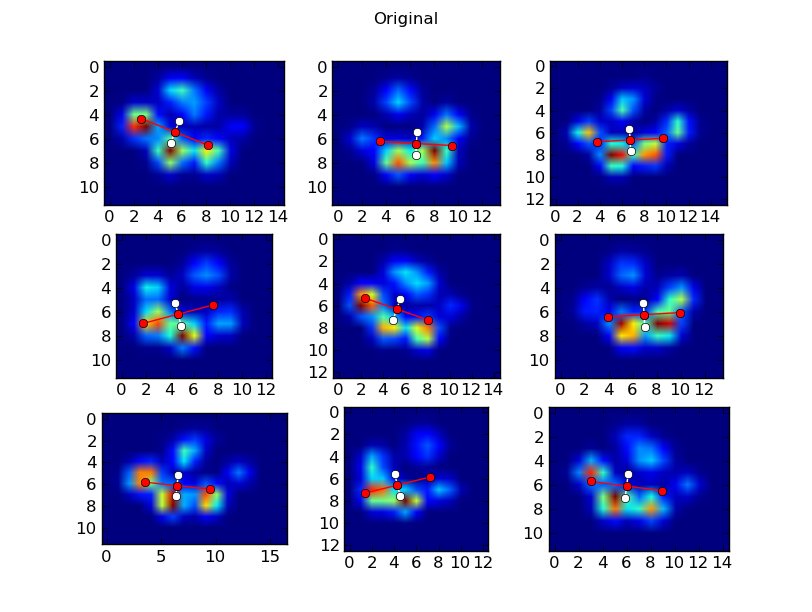 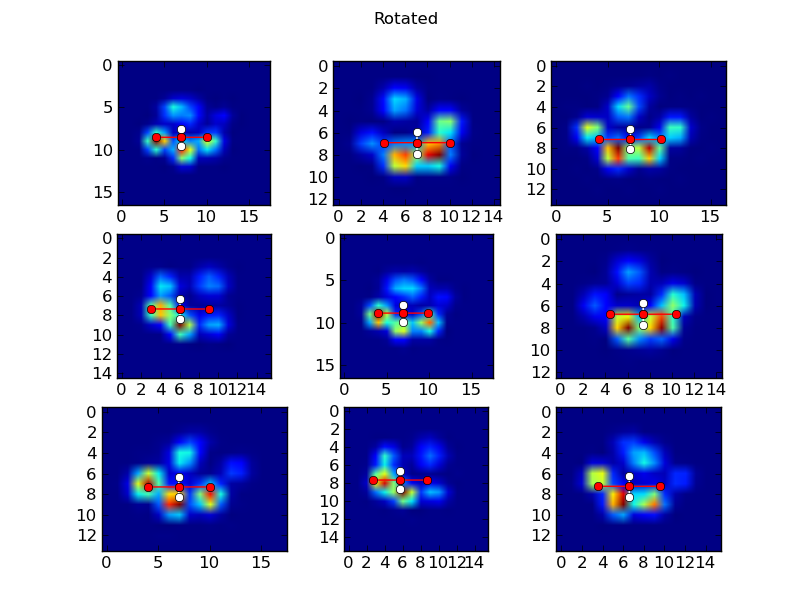 One thing to note here... I'm just rotating the image around its center. (Also, scipy.ndimage.rotate works as well for N-D arrays as it does for 2D. You could just as easily rotate the original 3D "pawprint-over-time" array.)

If you do want to rotate it about a point (say, the centroid), and move that point to a new position on the new image, you can do it fairly easily in scipy's ndimage module through a couple of tricks. I can give an example if you'd like. It's a bit long for this example, though...

Not the answer you're looking for? Browse other questions tagged python image-processing or ask your own question.

7
Compute eigenvectors of image in python
12
How can I rotate a 3D array?
0
Finding rotation angle inside a license plate