I'm trying to define indexing on few properties in Comos but I'm a little bit confused about automatic indexing. As per the Cosmos DB documentation:

By default, Azure Cosmos DB automatically indexes every property for all items in your container without having to define any schema or configure secondary indexes.

Also, refer to this:

In some situations, you may want to override this automatic behavior to better suit your requirements. You can customize a container's indexing policy by setting its indexing mode, and include or exclude property paths.

What I understand from the above points is that unless we define our custom indexing policy the automatic indexing is set to true (which makes sense). If however, we defined our own include and exclude paths for indexing else it should be false.

It would probably mean that if I define the container properties as below, the Indexing Policy Automatic property should be set to false on Cosmos DB.

However, I see that with the above configuration on CosmosDb indexing being defined with automatic set to true. 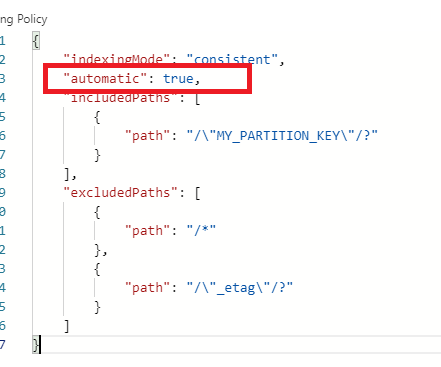 It becomes a little bit more tricky and confusing. Even after setting Automatic property to false the property remains true in the portal.

That is the below code does not seem to have any effect.

Even if I update the automatic property from the portal settings, the value does not change. And I also do not receive any error.

I am from the CosmosDB Engineering Team. The "automatic" property and the Included/Excluded paths are unrelated.

The "automatic" property is deprecated for most containers now. It could be used to isolate a collection horizontally into two sets of documents - a set that is secondary-indexed and another set that is not, by overriding indexing directive on a per-document level. Besides a lack of concrete business value, setting the automatic property to false also caused inconsistencies in query results based on whether the query utilized the index (as opposed to a scan, for instance). So we have now deprecated the property (it cannot be set to false).

The "automatic indexing" that we generally refer to is the fact that all paths in all your documents in your container are indexed by default. This can be seen by the fact that the default indexing policy includes /* (everything under the 'root' path) in the IncludedPaths section. Hope this helps.

Not the answer you're looking for? Browse other questions tagged azure azure-cosmosdb azure-cosmosdb-sqlapi or ask your own question.