or in this case do they do the same thing?

The console logs the getAttribute as a string, and the attr as a string, but the prop as a CSSStyleDeclaration, Why? And how does that affect my coding in the future?

My original answer applies specifically to jQuery 1.6. My advice remains the same but jQuery 1.6.1 changed things slightly: in the face of the predicted pile of broken websites, the jQuery team reverted attr() to something close to (but not exactly the same as) its old behaviour for Boolean attributes. John Resig also blogged about it. I can see the difficulty they were in but still disagree with his recommendation to prefer attr().

If you've only ever used jQuery and not the DOM directly, this could be a confusing change, although it is definitely an improvement conceptually. Not so good for the bazillions of sites using jQuery that will break as a result of this change though.

If you're a jQuery developer and are confused by this whole business about properties and attributes, you need to take a step back and learn a little about it, since jQuery is no longer trying so hard to shield you from this stuff. For the authoritative but somewhat dry word on the subject, there's the specs: DOM4, HTML DOM, DOM Level 2, DOM Level 3. Mozilla's DOM documentation is valid for most modern browsers and is easier to read than the specs, so you may find their DOM reference helpful. There's a section on element properties.

As an example of how properties are simpler to deal with than attributes, consider a checkbox that is initially checked. Here are two possible pieces of valid HTML to do this:

So, how do you find out if the checkbox is checked with jQuery? Look on Stack Overflow and you'll commonly find the following suggestions:

This is actually the simplest thing in the world to do with the checked Boolean property, which has existed and worked flawlessly in every major scriptable browser since 1995:

The property also makes checking or unchecking the checkbox trivial:

In jQuery 1.6, this unambiguously becomes

The idea of using the checked attribute for scripting a checkbox is unhelpful and unnecessary. The property is what you need.

I think Tim said it quite well, but let's step back:

Let's consider this anchor in a page at http://example.com/testing.html:

Some gratuitous ASCII art (and leaving out a lot of stuff):

Note that the properties and attributes are distinct.

Now, although they are distinct, because all of this evolved rather than being designed from the ground up, a number of properties write back to the attribute they derived from if you set them. But not all do, and as you can see from href above, the mapping is not always a straight "pass the value on", sometimes there's interpretation involved.

When I talk about properties being properties of an object, I'm not speaking in the abstract. Here's some non-jQuery code:

(Those values are as per most browsers; there's some variation.)

The link object is a real thing, and you can see there's a real distinction between accessing a property on it, and accessing an attribute.

As Tim said, the vast majority of the time, we want to be working with properties. Partially that's because their values (even their names) tend to be more consistent across browsers. We mostly only want to work with attributes when there is no property related to it (custom attributes), or when we know that for that particular attribute, the attribute and the property are not 1:1 (as with href and "href" above).

The standard properties are laid out in the various DOM specs:

These specs have excellent indexes and I recommend keeping links to them handy; I use them all the time.

Custom attributes would include, for instance, any data-xyz attributes you might put on elements to provide meta-data to your code (now that that's valid as of HTML5, as long as you stick to the data- prefix). (Recent versions of jQuery give you access to data-xyz elements via the data function, but that function is not just an accessor for data-xyz attributes [it does both more and less than that]; unless you actually need its features, I'd use the attr function to interact with data-xyz attribute.)

The attr function used to have some convoluted logic around getting what they thought you wanted, rather than literally getting the attribute. It conflated the concepts. Moving to prop and attr was meant to de-conflate them. Briefly in v1.6.0 jQuery went too far in that regard, but functionality was quickly added back to attr to handle the common situations where people use attr when technically they should use prop.

To fully understand how they work, here's an extended explanation on the difference between HTML attributes and DOM properties.:

Purpose: Allows markup to have data associated with it for events, rendering, and other purposes.

The class attribute is shown here on the body. It's accessible through the following code:

Attributes are returned in string form and can be inconsistent from browser to browser. However, they can be vital in some situations. As exemplified above, IE 8 Quirks Mode (and below) expects the name of a DOM property in get/set/removeAttribute instead of the attribute name. This is one of many reasons why it's important to know the difference.

Purpose: Gives access to properties that belong to element nodes. These properties are similar to attributes, but are only accessible through JavaScript. This is an important difference that helps clarify the role of DOM properties. Please note that attributes are completely different from properties, as this event handler assignment is useless and won't receive the event (body doesn't have an onload event, only an onload attribute). 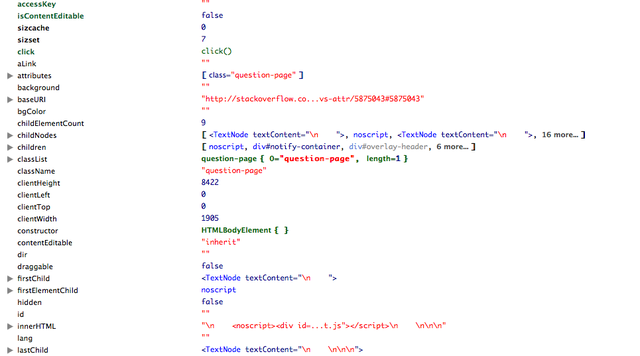 Here, you'll notice a list of properties under the "DOM" tab in Firebug. These are DOM properties. You'll immediately notice quite a few of them, as you'll have used them before without knowing it. Their values are what you'll be receiving through JavaScript.

In earlier versions of jQuery, this returns an empty string. In 1.6, it returns the proper value, foo.

Without having glanced at the new code for either function, I can say with confidence that the confusion has more to do with the difference between HTML attributes and DOM properties, than with the code itself. Hopefully, this cleared some things up for you.

A property is in the DOM; an attribute is in the HTML that is parsed into the DOM.

If you change an attribute, the change will be reflected in the DOM (sometimes with a different name).

Example: Changing the class attribute of a tag will change the className property of that tag in the DOM (That's because class is already used). If you have no attribute on a tag, you still have the corresponding DOM property with an empty or a default value.

Example: While your tag has no class attribute, the DOM property className does exist with a empty string value.

If you change the one, the other will be changed by a controller, and vice versa. This controller is not in jQuery, but in the browser's native code.

It's just the distinction between HTML attributes and DOM objects that causes a confusion. For those that are comfortable acting on the DOM elements native properties such a this.src this.value this.checked etc, .prop is a very warm welcome to the family. For others, it's just an added layer of confusion. Let's clear that up.

The easiest way to see the difference between .attr and .prop is the following example:

The thing you really need to be careful with is just do not mix the usage of these for the same property throughout your application for the above reason.

* Note: jQuery for this reason has a .val() method, which internally is equivalent to .prop('value')

Use prop() over attr() in the majority of cases.

A property is the current state of the input element. An attribute is the default value.

A property can contain things of different types. An attribute can only contain strings

This concept provides an example where the difference is observable: http://www.w3.org/TR/html5/forms.html#concept-input-checked-dirty

For some attributes like disabled on button, adding or removing the content attribute disabled="disabled" always toggles the property (called IDL attribute in HTML5) because http://www.w3.org/TR/html5/forms.html#attr-fe-disabled says:

so you might get away with it, although it is ugly since it modifies HTML without need.

This is why you should use mostly .prop, as it affects the effective property directly, instead of relying on complex side-effects of modifying the HTML.

All is in the doc:

attributes are in your HTML text document/file (== imagine this is the result of your html markup parsed), whereas
properties are in HTML DOM tree (== basically an actual property of some object in JS sense).

Importantly, many of them are synced (if you update class property, class attribute in html will also be updated; and otherwise). But some attributes may be synced to unexpected properties - eg, attribute checked corresponds to property defaultChecked, so that

Rule of thumb is: .prop() method should be used for boolean attributes/properties and for properties which do not exist in html (such as window.location). All other attributes (ones you can see in the html) can and should continue to be manipulated with the .attr() method. (http://blog.jquery.com/2011/05/10/jquery-1-6-1-rc-1-released/)

And here is a table that shows where .prop() is preferred (even though .attr() can still be used). 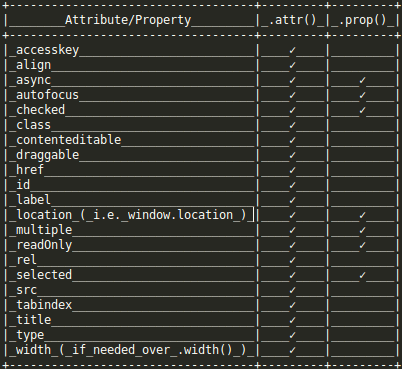 Why would you sometimes want to use .prop() instead of .attr() where latter is officially adviced?

Usually you'll want to use properties. Use attributes only for:

Before jQuery 1.6 , the attr() method sometimes took property values into account when retrieving attributes, this caused rather inconsistent behavior.

The introduction of the prop() method provides a way to explicitly retrieve property values, while .attr() retrieves attributes.

jQuery.attr() Get the value of an attribute for the first element in the set of matched elements.

jQuery.prop() Get the value of a property for the first element in the set of matched elements.

One thing .attr() can do that .prop() can't: affect CSS selectors

Here's an issue I didn't see in the other answers.

.prop() affects only a few attribute-selectors

The function above is used to check if checkbox1 is checked or not, if checked: return 1; if not: return 0. Function prop() used here as a GET function.

The function above is used to set checkbox1 to be checked and ALWAYS return 1. Now function prop() used as a SET function.

1) A property is in the DOM; an attribute is in the HTML that is parsed into the DOM.

There are few more considerations in prop() vs attr():

Since the prop function return CSSStyleDeclaration object, above code will not working properly in some browser(tested with IE8 with Chrome Frame Plugin in my case).

Thus changing it into following code

111
Jquery date picker z-index issue
541
jQuery Data vs Attr?
104
jQuery attr vs prop?
0
jquery .submit() not triggering though am using $(document).delegate()
387
How to find what code is run by a button or element in Chrome using Developer Tools
0
AJAX operation does its work, but always get error
0
jQuery attr and prop combination in script
51
Chrome Extension "Refused to load the script because it violates the following Content Security Policy directive"