Today when I tried to run a simple code on Sublime Text 3, the following message appeared:

Python was not found but can be installed from the Microsoft Store: https://go.microsoft.com/fwlink?linkID=2082640

And when I type Python in CMD, it opens the Windows Store for me to download Python 3.7. This problem started today for no good reason, I didn't change or downloaded anything about Python and already tried reinstalling Python, and the Path is correct.

Use the Windows search bar to find "Manage app execution aliases". There should be two aliases for python, unselect them, this will allow the usual python aliases "python" and "python3". See image below. 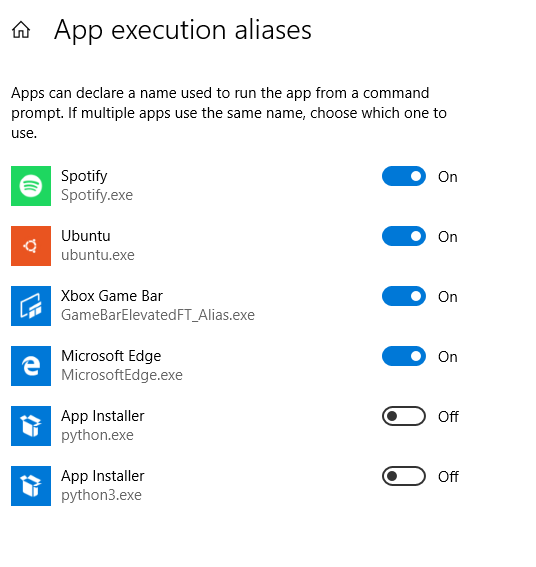 I think we have this problem when installing python because in a new Windows installation the aliases are in the ON position as in image below. When turned on, Windows puts a empty or fake file named python.exe and python3.exe in the directory named %USERPROFILE%\AppData\Local\Microsoft\WindowsApps. This is the alias. 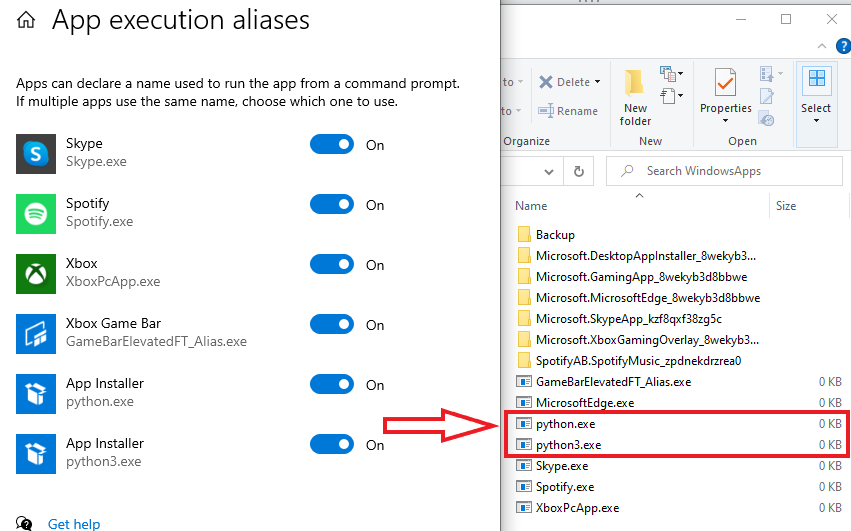 Then Microsoft put that directory at the top of the list in the "Path" environment variables. 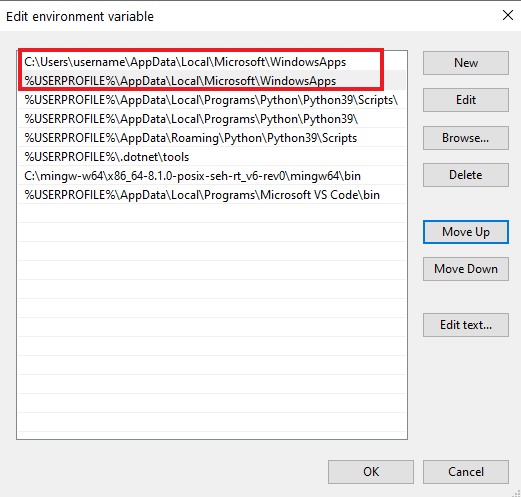 When you enter "python" in cmd, it searches the directories listed in your "Path" environment variables page from top to bottom. So if you installed Python after a new Windows 10 install then get redirected to the Windows Store it's because there are two python.exe's, the alias in the App Execution Alias page, and the real one wherever you installed Python but cmd finds the App execution alias python.exe first because that directory is at the top of the Path.

I think the easiest solution is to just check the python.exe and python3.exe to OFF as I suggested before, which deletes the fake exe's. Based on this Microsoft Devblog https://devblogs.microsoft.com/python/python-in-the-windows-10-may-2019-update/ they stated they created this system partially for new python users specifically kids learning python in school that had trouble installing it. Creating this alias was to helps kids just starting python install it and focus on learning to code. I think Windows probably deletes those aliases if you install Python from the Windows App Store. What we are noticing is that they do not get deleted if you manually install from another source.

(Also the empty/fake python.exe is not really empty it says 0 KB in the screenshot but entering "start ms-windows-store:" in cmd opens the Windows App Store so it probably just has a line with that and a way to direct it to Python page.)

Finally, as Chipjust suggested you can create a new alias for python using something like DOSKEY as explained in this article for example: https://winaero.com/how-to-set-aliases-for-the-command-prompt-in-windows/

The main problem here is that the order in the path calls the windows from top to bottom, and that there is python.exe in %USERPROFILE%\AppData\Local\Microsoft\WindowsApps which is called first if there are no other python.exes in the PATH above that line.

To ensure that the correct python.exe is called, add the python installation folder (containing python.exe) to the PATH, above %USERPROFILE%\AppData\Local\Microsoft\WindowsApps 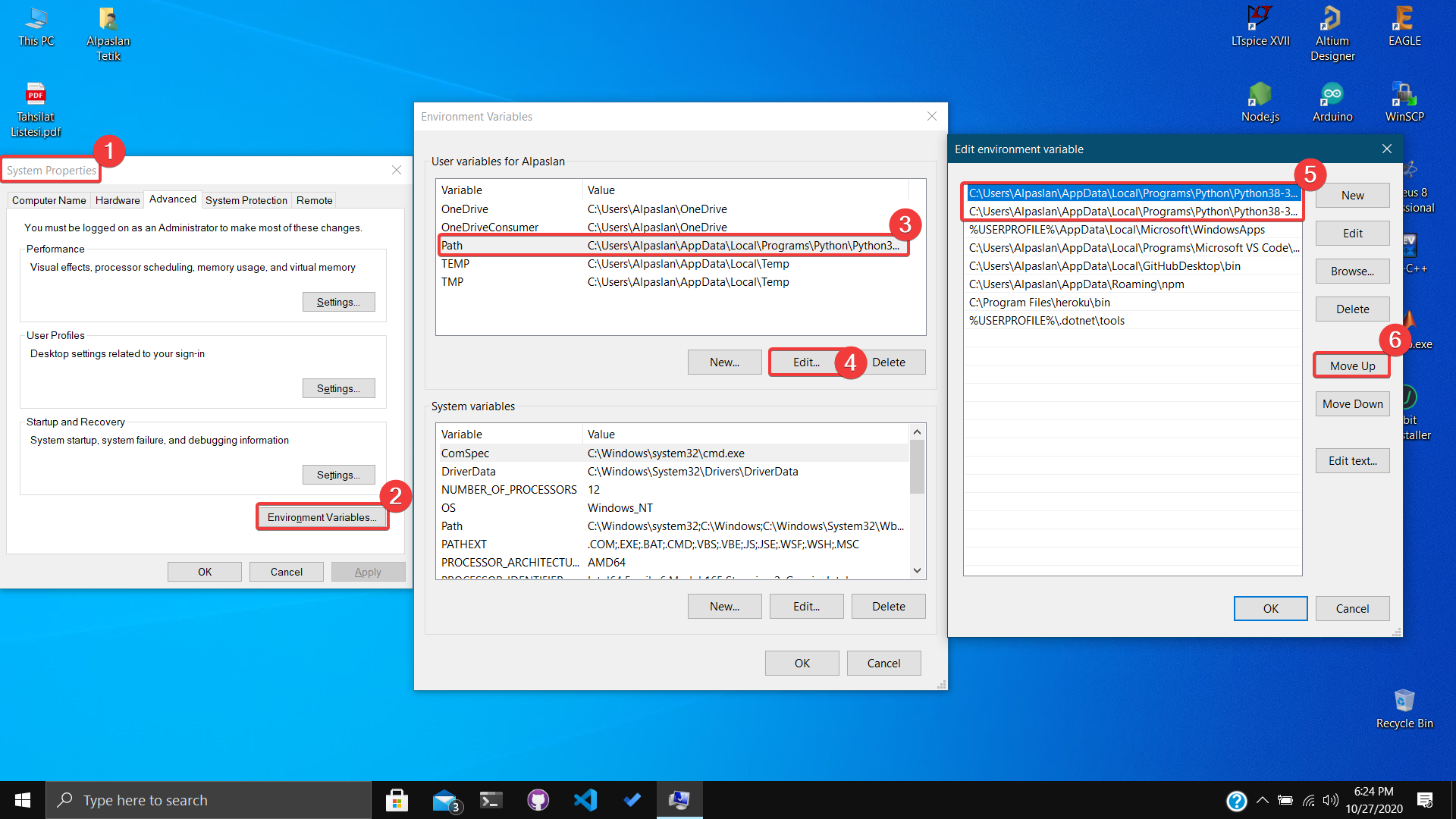 If python is already installed, then go to Apps & features from settings, select Python, then select modify. Again select modify and select Next: 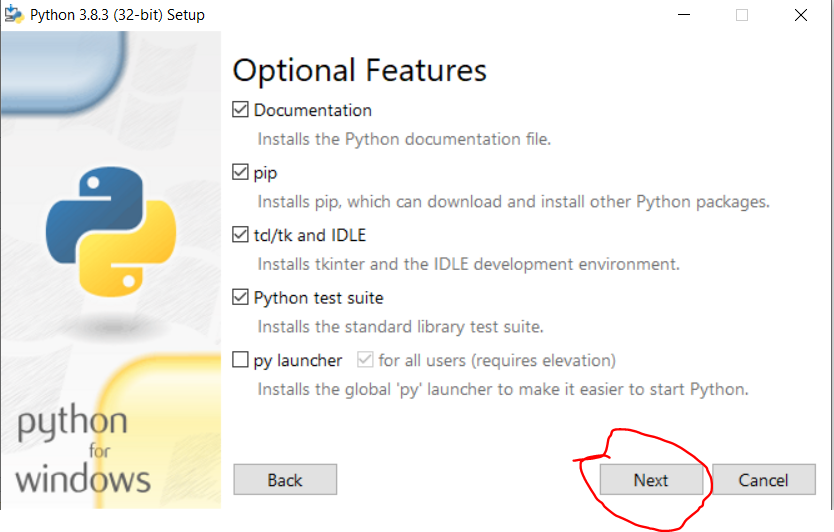 Then this window will appear: 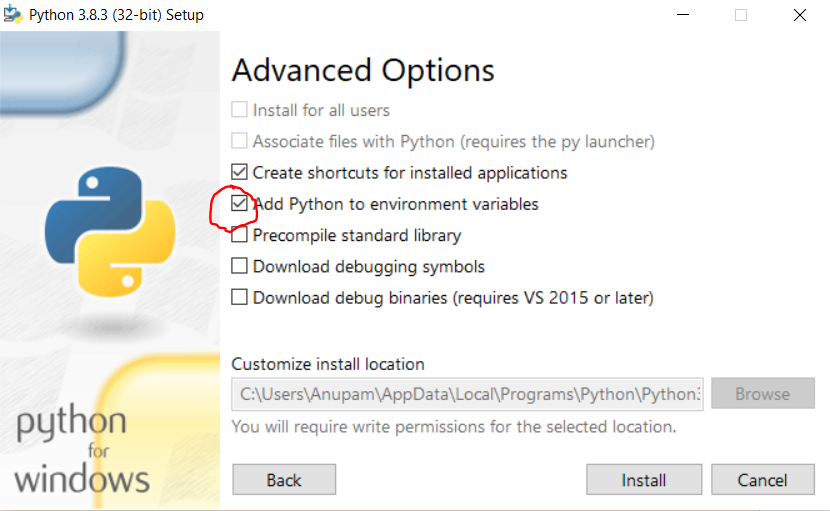 Select "add Python to environment variable" and click on the install button. Then again go to apps & features, click modify and then click repair. Now go to CMD and type python. Problem solved.

I had problems with this as well, where Windows didn't recognize Python or Anaconda in a double click or cmd (command) prompt.

Solution: I tried deleting the python*.exe files in the WindowsApp directory, but windows wouldn't allow it, so I opened a command prompt in the "%USERPROFILE%\AppData\Local\Microsoft\WindowsApps" directory, typed:

Then I created a environment variables linking to the installed python link, in my case was C:\Anaconda3; C:\Anaconda3\Scripts and some others for good measure

This is a powershell script that does the magic.

As a person who does Python development in Sublime Text, I know you said the python path was correct but when you install python make sure to tick the option to add Python to PATH.

I had the same issue back in the day til I did this. 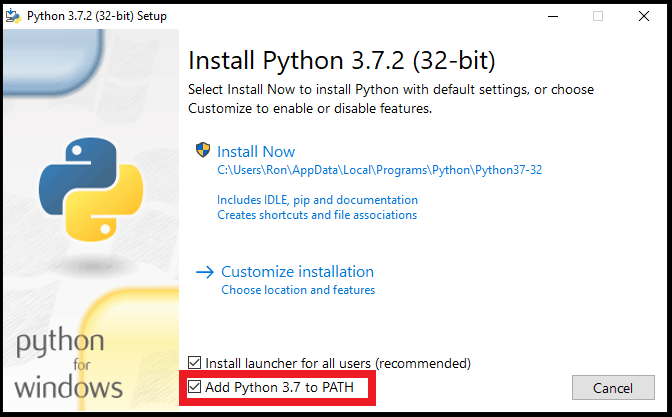 You can manually add Python to windows path by doing this 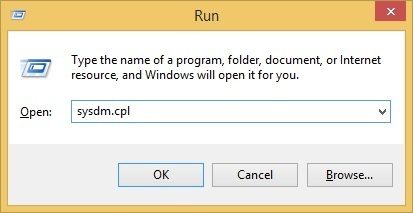 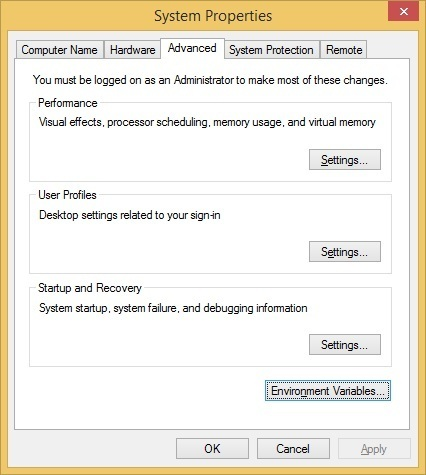 Here is how a Python application path looks like: 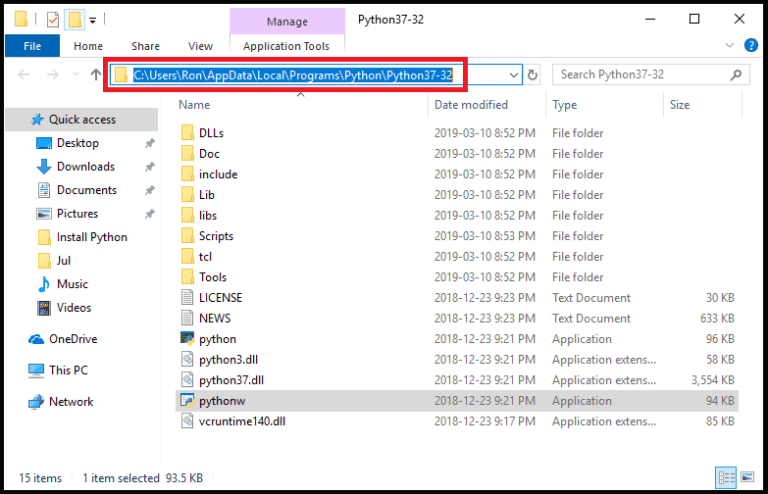 And this is how a Python Scripts path looks like:

4a. If it doesn't show, press new instead of edit and fill the New User Variable box

That’s it! You just added Python to the Windows Path.

This is an additional note for anyone using pyenv-win: after turning off the app execution aliases, run pyenv rehash. You may also need to close/reopen your CMD or Powershell window.

So, I had the same problem. My answer was to add python to PATH not only for User variables, it was there, but also for System variables. And now everything works. 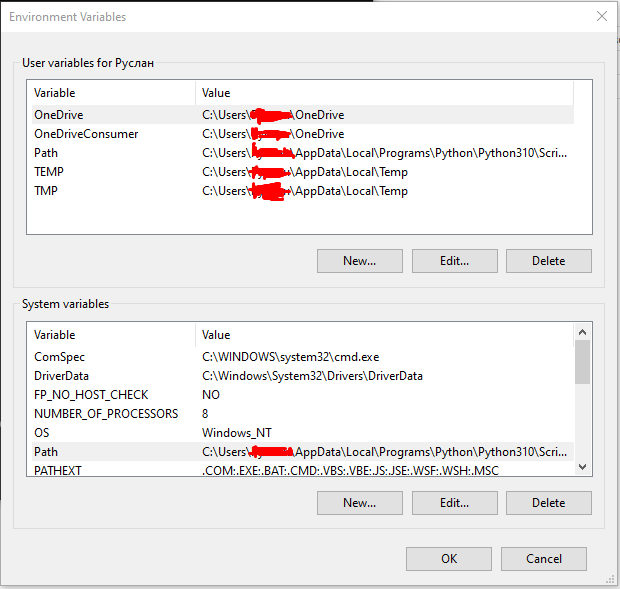 So, I've got the same problem in VENV. I solved it by typing >> python**.exe** But to add every time .exe a little bit nervous.

Adding a bit to the question. Even when I typed pip freeze, it wasn't showing anything. Here's what I did: There were multiple instances for python app in /AppData/Local/Microsoft/WindowApps.

Delete those and then it works.

ManyaManya
1
Add a comment  |
Highly active question. Earn 10 reputation (not counting the association bonus) in order to answer this question. The reputation requirement helps protect this question from spam and non-answer activity.

Not the answer you're looking for? Browse other questions tagged python windows-10 sublimetext3 or ask your own question.

1
Typing python in CMD opens up the Microsoft store download for Python 3.8
0
Django manage.py
0
$ python works fine in the terminal for vs code but $ python3 leads directly to the microsoft store
1
when I type python in powershell or cmd, it opens microsoft store instead of starting python shell. How to fix this?
0
Can't start the Python interpreter in PowerShell or Console anymore using "python", need to type "py"
110
Python command not working in command prompt
41
What is the difference between 'py' and 'python' in the Windows terminal?
0
Autoformatting failed, buffer not changed : Sublime text
0
(vsc) every python command prints Python
0
dev_appserver.py does nothing in CMD on windows
See more linked questions

1548
What's the canonical way to check for type in Python?
1923
How to determine a Python variable's type?
552
bash: pip: command not found
4
python opens new console window instead of printing into cmd
1
How do you get the Code Runner extension in Visual Studio Code to use the selected Python interpreter?
29
Python was not found but can be installed from the Microsoft store (March, 2020)
0
I am not able to install the autocomplete-python package in atom text editor
0
Sublime Text3 build error - Python not detected